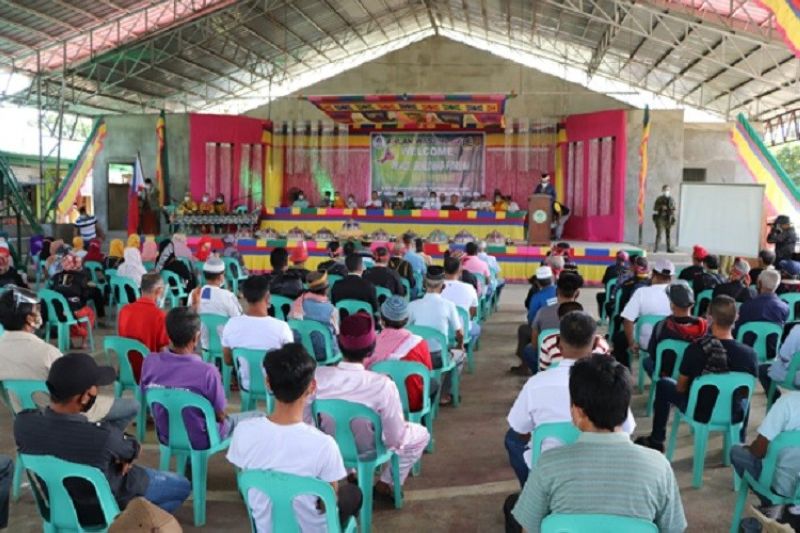 ZAMBOANGA. The municipal government of Kumalarang, Zamboanga del Sur in partnership with the police and military conduct last week Peace Building Forum and Islamic Symposium to empower the Tri-People of the town and strengthen the relationship between and among them as a vehicle for conflict resolution. A photo handout shows the forum participants listen intently to the resource speakers. (SunStar Zamboanga)

THE Tri-People of Kumalarang, Zamboanga del Sur have been encouraged to not just peach peace but also live with it.

This was the words of encouragement of Mayor Ruel Molina of Kumalarang to the participants of the recent Peace Building Forum and Islamic Symposium.

The forum, which was held last week, was a joint activity of Kumalarang municipal government, Army’s 53rd Infantry Battalion (IB) and the police to empower the Tri-People of Kumalarang and strengthen the relationship between and among them as a vehicle for conflict resolution.

Lieutenant Colonel Jo-arm Herrera, commander of the 53 Infantry Battalion, said the forum focused on the proactive involvement of the Tri-People in conflict resolution, Tri-People empowerment, preventing and countering violent extremism, and peacebuilding and peace sustainment.

Herrera said the forum was anchored in winning and achieving sustainable peace.

The Tri-People depicts the peoples of Mindanao--the Christians, Muslims and the indigenous peoples (IPs) or Lumads. The relationship among these three makes religion and religious identity a potential foundation and mechanism for inter-religious dialogue.

Herrera said to win and sustain peace, everyone must “work as one,” emphasizing the role of the people in the implementation of Executive Order 70--the institutionalization of the “Whole-of-Nation” approach--signed by President Rodrigo Duterte.

He said the symposium also discussed the different perspectives on peace and development.

Major Mujib Ladjabuan, Army's 1st Infantry Division chaplain, lectured what it is to be a Muslim--the foundation of which is anchored on pleasing and yearning for the love of Allah.

Professor Ten Alim, vice president for administration and finance of the Cotabato City State Polytechnic College, taught the participants about the true meaning of Jihad contrary to what the mainstream people perceive as "holy war."

Uztadz Ismael Ibrahim, vice-chairperson for DA'WAH and Masjid Affairs of Bandar Kutawato, taught the forum participants about the Pillars of Islam. (SunStar Zamboanga)