Madridejos is 'Covid-free' a week after Suroy-Suroy 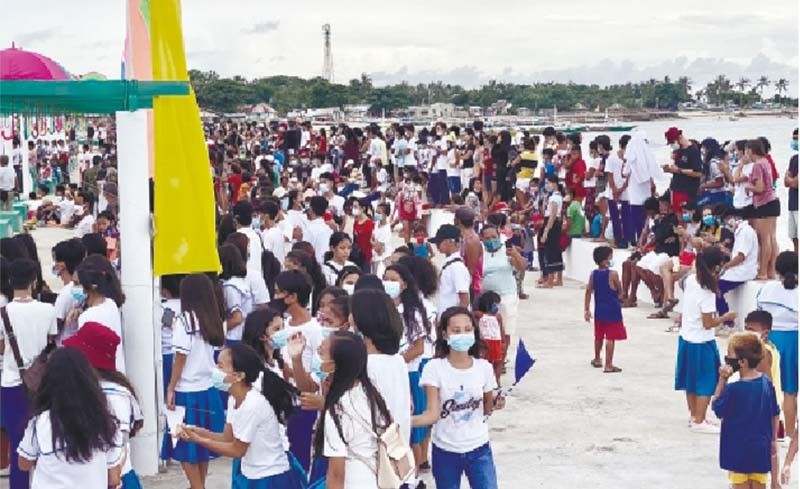 QUARANTINE VIOLATION. Students in their uniforms and other residents fail to observe physical distancing during the Suroy-Suroy SMB Escapade in Madridejos, Bantayan Island on Nov. 27, 2020. / NICKO TUBO

MADRIDEJOS Mayor Salvador dela Fuente on Friday, Dec. 4, 2020, doused speculations of a potential super-spreader event and declared that the town is “Covid-free” a week after a controversial mass gathering.

Dela Fuente said no new coronavirus infections were reported in the past seven days. Of the town’s 107 cases, three died and the rest recovered.

“We are thankful that we are Covid-free. I am thankful to my constituents that they exercised caution even during that event. I understand how people feel,” he said.

It has been seven days since the Nov. 27 welcome ceremony for the Suroy-Suroy SMB Escapade was held by the Cebu Provincial Government in Kota Park in Madridejos.

The event, which was attended by Presidential Spokesperson Harry Roque, drew a huge crowd and prompted investigations into alleged violation of quarantine protocols, especially on physical distancing, and the participation of students in their school uniforms.

Coronavirus disease 2019 (Covid-19), which is caused by Sars-CoV-2, has an incubation period of up to 14 days. Symptoms of the disease usually manifest in two to 14 days. The most common are fever, cough and loss of smell and/or taste.

Some infected individuals, however, don’t develop symptoms and could unknowingly spread the virus.

Dela Fuente said none of the residents who attended the event reported any symptoms.

“I asked those who attended the event. So far, no one has reported any symptoms. None. We are very grateful,” he said.

He said he did not mind the negative comments on social media, but was thankful that people were concerned.

Dela Fuente said he has been reminding his constituents to adhere to the minimum public health standards and comply with quarantine protocols to prevent infections.

The Department of Education Central Visayas (DepEd 7), meanwhile, is still waiting for the reports from the two fact-finding teams looking into the participation of students in the Nov. 27 mass gathering in Madridejos.

Jimenez said he created two fact-finding teams so he could validate each team’s report.

“I also conducted my own interviews, but this cannot be called official as I have yet to receive the reports of the teams,” Jimenez told SunStar Cebu on Friday.

Jimenez was in Bantayan for a DepEd activity last Dec. 2.

Based on the initial interviews that he conducted, Jimenez said he learned that those who joined the Suroy-Suroy Sugbo event in Madridejos were senior high school students.

He said sanctions will be imposed on any DepEd personnel found to have instructed the students to join the activity. The sanctions will depend on the severity of the violation, if any.

He said administrative charges may be filed against a DepEd employee found to have violated the policies and issuances of DepEd amid the Covid-19 pandemic.

“If the violation was against the guidelines set by other agencies and not by DepEd, we will coordinate with the agency concerned,” he said.

He welcomed the investigation that is also being conducted by the Department of the Interior and Local Government (DILG).

Because of what happened in Madridejos, Jimenez said he will issue a memorandum reminding the teachers, school heads and division heads in the region to abide by health and safety protocols set by the authorities.

Michael Braga, DILG 7 information officer, said the regional office is ready to cooperate and submit any reports relevant to the investigation.

The Madridejos mayor earlier said he will face the DepEd investigation.

As of Friday, face-to-face classes are still not allowed in the region.

The entire Cebu is under modified general community quarantine (MGCQ) until Dec. 31, 2020.

Mass gatherings are allowed, but limited to 50 percent of venue capacity in areas under MGCQ. Minimum public health standards should still be observed such as wearing of face masks and face shields, and observing physical distancing of at least one meter. / ANV / WBS