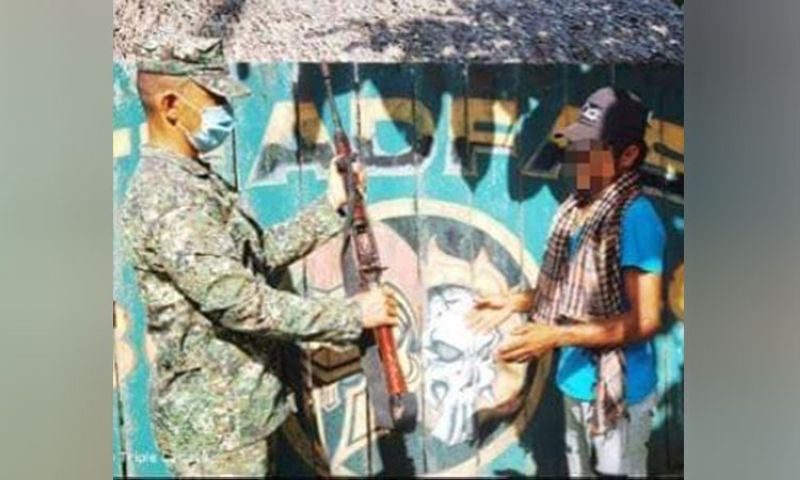 ZAMBOANGA. Three former Sulu-based Abu Sayyaf bandits surrender to government troops one after the other from Wednesday until Friday (December 2 to 4) in the province of Tawi-Tawi as they wish to live a peaceful life. A photo handout shows one of the three Abu Sayyaf surrenderers hands over an M-14 rifle to a marine official when he yielded to the government. (SunStar Zamboanga)

THREE former Sulu-based Abu Sayyaf bandits surrendered one after the other in the province of Tawi-Tawi, military officials said Saturday, December 5.

Vinluan said Hanain is a follower of the late Abu Sayyaf sub-leader Hatib Hajan Sawadjaan and was involved in the series of clashes against the military troops in Basilan and Sulu provinces.

Vinluan said that Hanain also participated in different kidnapping activities, notable of which are the kidnapping of Rolando de Torchio, an Italian national, on October 7, 2014; Ewold Horn, a Holland national, on February 1, 2012; Yahong Chen from Isabela Basilan, on May 22, 2014; and Canadian nationals Robert Hall and John Ridsdel, Norwegian national Kjartan Sikkengstad, and Filipina Marites Flor, on September 21, 2015.

"Due to the intensified operations conducted by the government troops in the province of Sulu, Bennaser and Roni decided to leave the Abu Sayyaf Group sometime in October 2016 and returned to Tawi-Tawi," Rojas said.

Rojas said that Alimudin yielded on Wednesday, December 2, at the headquarters of the 36th Marine Company in Poblacion village, Sapa-Sapa, Tawi-Tawi.

Alimudin turned over his M-14 rifle when he surrendered.

"The windfall of surrender demonstrates success in our efforts to end terrorism and lawlessness. We hope that more terror group members will decide to surrender and join us in achieving peace without killing each other," Vinluan said. (SunStar Zamboanga)