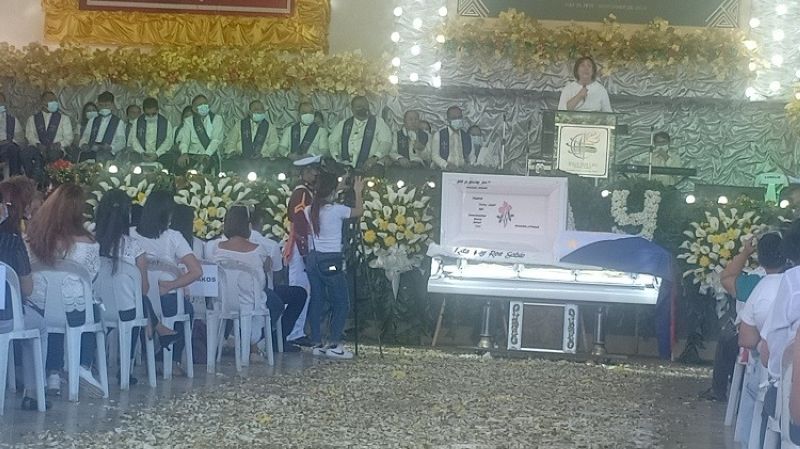 LAST RESPECT. Tagoloan residents sympathize with Mayor Enan Sabio and family during the final memorial service for his wife, Rita May Roa Sabio, 50, on Thursday, December 3, 2020, at the Jesus Our Life Global Family Church in Tagoloan, Misamis Oriental. (Photo by Lynde Salgados)

"Rita May (Roa-Sabio), whom my husband Julio Uy and I considered as part of the family, had sincerely asked that I should file a bill in Congress that will make TCC (Tagoloan Community College) as not just a community college in Tagoloan but, rather, a state college," Uy said in front of a large crowd who attended the final memorial service of her political ally at the Jesus Our Life Global Family Church in Tagoloan town, Misamis Oriental Thursday, December 3, 2020.

The wife of Tagoloan Mayor Gomer "Enan" Sabio, who succumbed to cardiac arrest at the age of 50, was buried later at the Golden Haven Cemetery in Barangay Bulua, Cagayan de Oro City.

"It was a most-respected request from a noblewoman that I'm honored to do my part for its realization, to the best of my ability. Until her death, which was very untimely and unfortunate, all that she thought of was the good and betterment of young students not only in Tagoloan but neighboring places of Misamis Oriental and Cagayan de Oro like Barangay Villanueva, tungod sa kagamay compared sa Tagoloan nga maka-benefit sa maong kalamboan," Uy said.

She said she witnessed how Rita May had been largely instrumental for Mayor Sabio's success and Tagoloan's massive development, being a multi-tasking public servant that touched so many lives in the booming Tagoloan town.

Tagoloan owns the largest seaport in the province, the Mindanao International Container Terminal, and host to many big companies and industries like the Phivedic Industrial Estate, Swift and San Miguel Corporation.

"She's not just an ordinary woman. Rita May was a certified nurse, who became a well-admired teacher at the Tagoloan Community College and also elected kagawad in Barangay Natumolan, Tagoloan. She's a woman for others and certainly a big loss for everyone," Uy added.

"Either it would discourage or encourage him to go on further knowing that he was first an established businessman before he entered politics. Tita May was the architect and source of inspiration probably to almost all of his productive plans for Tagoloan," one confidant Jan Div Casas told SunStar Cagayan de Oro.

Mayor Sabio seemed virtually submissive as he turned very ordinary in sharing his inner feelings to the public.

"Once, she told me that politics has taken me from her because we're inseparable, at the time, when I'm not yet a politician. Dungan mi permi mangaon bisan dis-oras na sa kagabhi-on. Now a piece of me, I mean half of my life, is gone along with her joining our Creator," the mayor said.

Mayor Sabio was grateful that their family was able to hold a decent wake and funeral for a fallen "stage mother" to son, Jeremiah Daniel, 19, and daughter, May Rutchel, who is married to basketball player J.R. Gerilla.

He embraced, gently combed his wife's hair with his palms and--many times, for the last time--passionately kissed his college sweetheart goodbye.