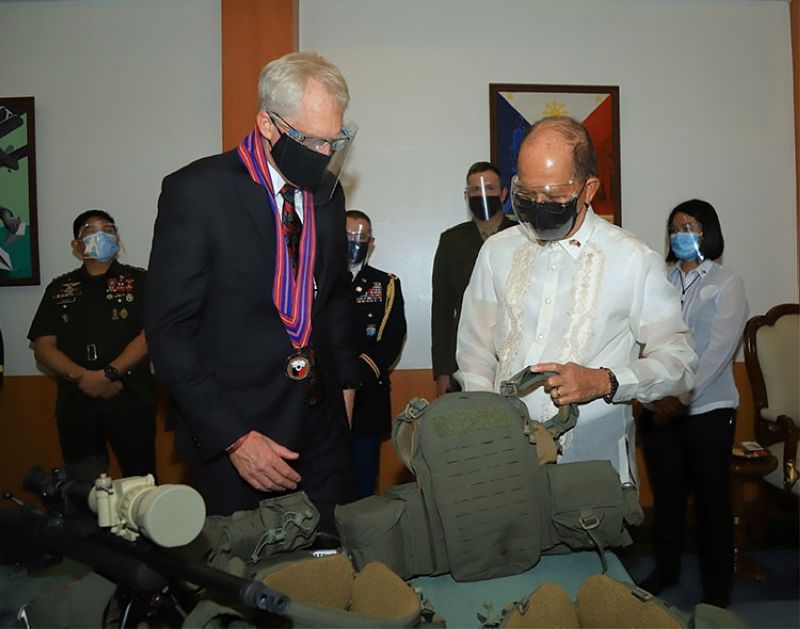 THE US defense chief announced Tuesday, December 8, the delivery of nearly $30 million worth of weapons to the Philippines, which faces threats from Islamic State group-linked militants.

Acting US Defense Secretary Christopher Miller made the announcement during a brief visit to Manila, where he met with his Philippine counterpart and the foreign secretary. The weapons, including equipment for snipers and anti-bomb squads, were delivered ahead of Miller’s visit, officials said.

“The new equipment will strengthen the Armed Forces of the Philippines’ joint precision strike, sniper, riverine and counter-improvised explosive device capabilities,” the US Embassy said in a statement, without elaborating.

The Department of Defense in Manila said Miller told Defense Secretary Delfin Lorenzana that the US will also deliver a Lockheed C-130 transport aircraft to the Philippine military later this month. No other details were given. Lorenzana thanked the US for helping the Philippines strengthen its defense capabilities.

Miller said his talks with Lorenzana and Foreign Secretary Teodoro Locsin Jr. centered on “deepening our alliance and supporting a free and open South China Sea and Indo-Pacific region.”

Miller is the latest senior US security official to visit Manila and announce defense assistance to America’s oldest treaty ally in Asia. The visits project normalcy in Washington’s foreign relations as President Donald Trump continues to challenge the results of the November 3 presidential election.

US National Security Adviser Robert O’Brien visited Manila three weeks ago and announced the delivery of precision-guided missiles and other weapons to help the Philippines battle Muslim militants. He also renewed a pledge to defend the Philippines if it comes under attack in the disputed South China Sea.

O'Brien repeated US Secretary of State Mike Pompeo’s statement early this year that “any armed attack on Philippine forces, aircraft or public vessels in the South China Sea will trigger our mutual defense obligations.”

O’Brien expressed hope for the continuance of a security agreement that allows American forces to train in large-scale combat exercises in the Philippines.

President Rodrigo Duterte moved to abrogate the Visiting Forces Agreement with the US early this year but later delayed the date the decision would take effect to next year, a move welcomed by O’Brien. (AP)