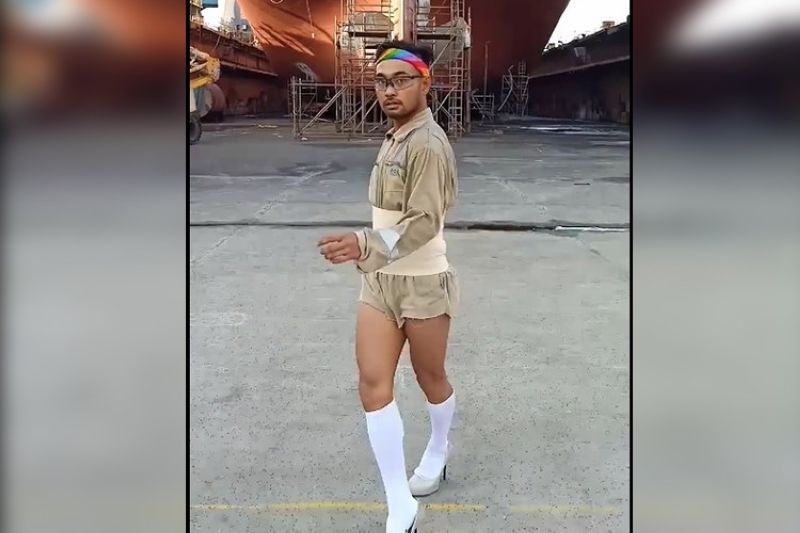 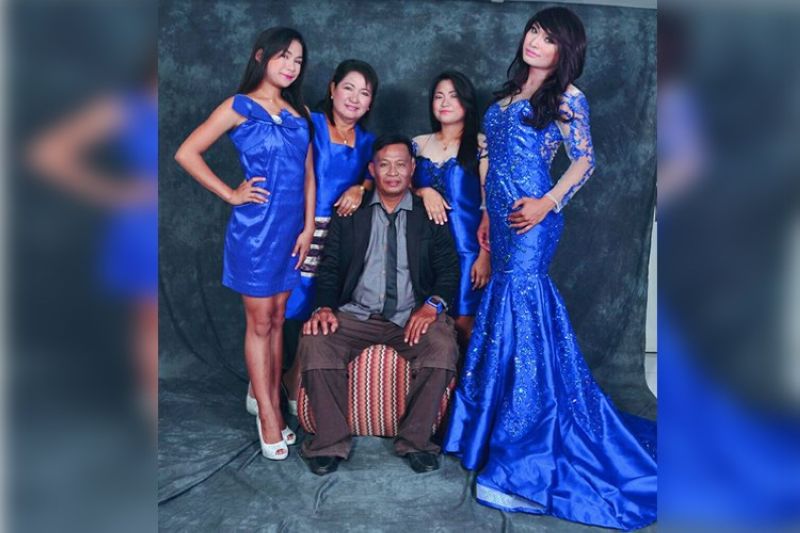 Robert Floro (far most) poses with his family for a family portrait. He is happy that they finally accept him for who he is.

AS little children, we have been taught of gender stereotypes when it comes to career. Jobs that make use of physical strength or those that need high-thinking capacity are immediately for men. On the other hand, those careers that require nurturing, being beautiful, etc are reserved for women.

But fortunately, as time goes by, this stereotype fades away. More and more people understand that one’s gender is not a hindrance to qualification and excellence in a specific career field. Robert Paul Floro is one of those who proves this. Being a seaman deployed for ship work requires physical strength and sleepless hours of work but this did not stop him from being fabulous whenever he had the time.

Floro graduated from DMMA College of Southern Philippines under their maritime program. He became more known online after his video of the Toco toco challenge he uploaded in July this year went viral. He was in their shipyard wearing high heels and catwalking fiercely like a pro. As of writing, the video now has 12k reactions, 4.7k comments, 13k shares, and over a million views on Facebook.

Get to know him more and be inspired of how he defied gender stereotype of the society and became freer as ever:

SSD: What made you decide to pursue being a seaman instead of going for careers that members of the LGBT are more known to take?

RF: Yes it's my decision to be a seaman. When I was still a child I would hurry home from school just to watch Popeye the sailor man. Until I grew up, I was really interested with the ocean and so I decided to take BSMT. I was really curious about the ship and stuff related to it.

SSD: Tell us of your college years. Have you been a victim of bullying because of your sexual orientation?

RF: In my first year in DMMA, since it's my first time living in a dormitory under semi-military training, it was really difficult to adjust. I was not ‘out’ yet that time. Until I sensed with my ‘gaydar’ that I’m not alone. There are so many of us there. Hahaha. Even the upper classes have gay students and they became my inspiration.

In our life, bullying is inevitable. Sometimes it’s just on how you deal with them. As for me, I had no problems with it because my gay friends were there to support and defend me. We had each other’s back. But maybe the bullying that I experienced that was really stressful for me was from my family. They were asking me why I pursued being a seaman that I’m gay. They said all my hard-earned money will just go to men. They were accusing me that the reason I decided to be a seaman is because there are so many men aboard. But I tried not to mind those words. Instead of being hurt, I used that as an inspiration to persevere with my studies and to someday prove them wrong. And so I graduated from DMMA with flying colors. Ganern! Hahaha.

SSD: What are the challenges you experienced at work being a gay seaman?

RF: I’m very open with my personality. I don’t like that I have a workmate I’m not in good terms with. I don’t like gossip. So aboard, I make it a point to let people know who I really am. If they have a problem with that, I make the adjustments of not bothering them. But so far, in my experience working with different nationalities and personalities, I’m thankful of how they’re understanding and supportive of who I am. I think that’s also one culture of being a seaman -- to be open-minded and understanding despite the differences.

SSD: What can you say to members of the LGBT who also dream of becoming a seaman?

RF: To everyone who dreams of being a seaman someday, not just the members of the LGBT but also to the women, be true to yourself. Do what you want and what makes you happy because I know, you can do everything as long as your hearts and minds are driven and inspired in what you do. Push lang teh!

SD: Tell us of your famous Toco Toco challenge that went viral

RF: Even before Tiktok was a thing, I already love wearing high heels. I upload photos and FB and Instagram wearing heels. For me, it's such an honor to know my friends are happy with what I do.

A few months ago, many requested that I do the Toco toco challenge. I was in the shipyard so I thought why not give it a try. I have no expectations except for my friends to see it. I was just shocked after waking up and seeing it has more than 50k shares already!

What's important for me is to make people happy in my own ways. It's a great feeling. In the future, I plan to make more videos to inspire others to break the stereotype about seamen that we should be tough-looking.

We all have the freedom to do what we want to do. Not because you're a woman or gay, you can't be a seaman anymore. It's not about that, it's about your capabilities and dreams of becoming one. Like I said, push lng ah! Hehe