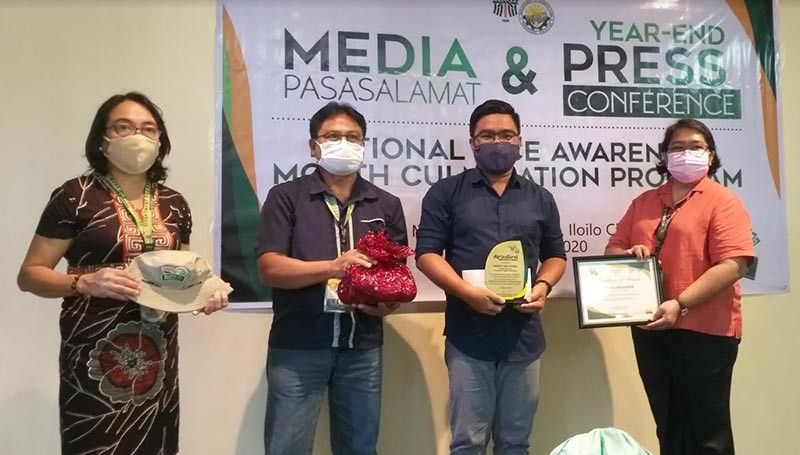 He received the plaque and certificate of recognition from officials of the DA-Western Visayas headed by Regional Executive Director Remelyn Recoter during the Media Pasasalamat and Year-End Press Conference held at the Westown Hotel in Iloilo City on Thursday, December 10.

Nicavera, whose parents are farmers, said agriculture has a special place in his heart.

Understanding the plight of farmers, as well as having a deep appreciation of their contribution to society, mainly feeding the nation, have been motivating him to always tackle issues concerning the agriculture sector, especially farmers and fisherfolk.

"I am humbled to be given this recognition by a government award-giving body. It inspires us, few agriculture beat reporters, to continue telling the stories of our farmers -- our unsung heroes," he said, adding that the sector needs journalists who are passionate in serving the voice of the farmers in the community, especially the small ones.

The annual search is open to all print, broadcast and digital media journalists in Western Visayas who are actively communicating stories on agriculture.

It recognizes their "outstanding contribution" to the development of the region's agriculture industry.

For DA-Western Visayas, the media is a strong partner of the agency in keeping a well-informed community, especially during the pandemic.

Its top official thanked members of DA-Western Visayas press corps for the partnership, as she cited the contribution of the media in making agricultural extension services closer to the farmers through news and other information dissemination programs.

Recoter said during the pandemic, especially in the earlier months, the press through various platforms have informed the public especially the farmer producers, truckers, logistics and input suppliers on food passes for the unhampered flow of agricultural products to the market and input supplies to the production areas, as well as on the Inter-Agency Task Force IDs for the mobility of the food producers, extension workers and agribusiness personnel.

"The urban populace have scheduled their marketing of fresh produce and farmers bringing their produce to the Kadiwa ni Ani at Kita in partnership with Uwas rolling stores in Iloilo City and Negrense Kadiwa in Negros Occidental, among others, through your news and updates," she said.

The DA official further said the interest in food production has increased through the works of journalists like featuring urban farming, container gardening and vegetable gardening, among other farming practices.

Media programs have also increased the availment of various projects of the agency, like rice resiliency by qualified recipients, she said.

"This year, 2020, is the most challenging year for all of us, but because of your presence as well as of the farmcasters, it made the frontliners especially the stakeholders' -- farmers, fisherfolk, agribusiness personnel and extension workers -- tasks to ensure food security in times of health emergency lighter," Recoter said, adding that she looks forward to a stronger partnership in 2021.

Darylle Marie Sarmiento of GMA TV One Western Visayas won the Most Supportive Agriculture Reporter for television, while Perla Lena of the Philippine News Agency won the same award for the digital media category.

Tara Yap of the Manila Bulletin emerged as Most Supportive Agriculture Photojournalist.

For its Rice Photography Contest, the winners were Billy Tablatin Jr. of Tubungan, Iloilo; Ernesto Villanueva Jr. of Iloilo City; and Reuben Palma of Pavia Iloilo.

Aside from plaques and certificates, all winners received a cash prize and one sack of rice each.

"This is the second year of the search and we look forward to making it bigger across the region in the years to come," DA-Western Visayas Regional Information Officer James Earl Ogatis said.

It is just fitting to recognize the contribution of the media also in the promotion of programs and technologies of the DA especially to the local farmers and fisherfolk, he noted.