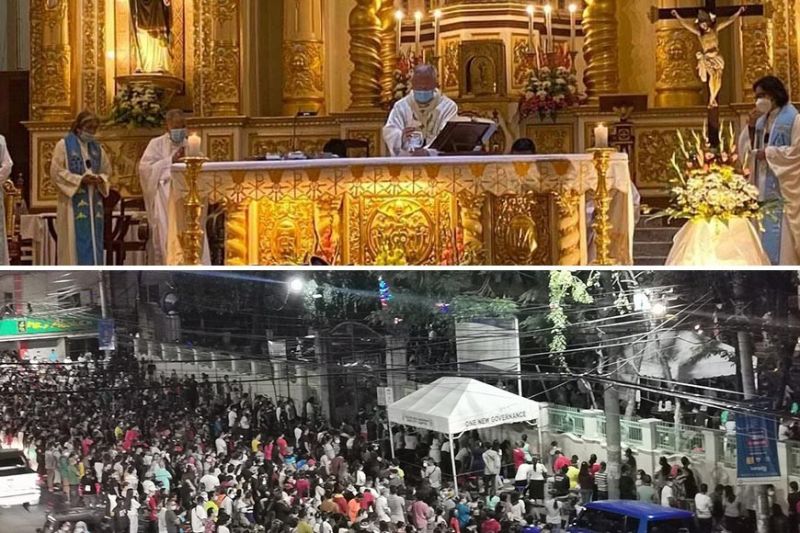 GATHERING AT DAWN: Cebu Archbishop Jose Palma (top photo) concelebrates the Misa de Gallo at the Archdiocesan Shrine of the Immaculate Heart of Mary in Barangay Poblacion, Minglanilla, Cebu attended by close to 2,000 people on Wednesday, Dec. 16, 2020, the first day of the Misa de Gallo. In Cebu City, churchgoers (above) crowd the street outside the Sto. Tomas de Villanueva Parish in Barangay Pardo Wednesday, prompting Mayor Edgardo Labella to issue additional guidelines on the holding of the Misa de Gallo and Simbang Gabi in the city. (PHOTOS BY BENJIE TALISIC (TOP) AND DAVE TUMULAK (ABOVE))

FOLLOWING reports of overcrowding in some churches in Cebu City during the first day of Misa de Gallo on Wednesday, Dec. 16, 2020, Mayor Edgardo Labella said authorities will be implementing additional measures to ensure that social distancing will be observed in the remaining eight dawn masses.

Labella said there is a need to install checkpoints on roads leading to churches in order to screen the churchgoers.

Authorities, he said, will enforce the age restrictions, prohibiting those below 15 years old and above 65 years old from hearing masses.

In a press conference hours after the first Misa de Gallo, Labella said the law enforcers were instructed to enforce the City’s policy not allowing persons to hear mass if they are not wearing masks and face shields.

Some churches in the city where a large pack of churchgoers went to were the ones in Barangays Pardo and Lahug, according to Cebu City Police Office (CCPO) deputy director for operations Lt. Col. Wilbert Parilla.

As early as 2 a.m. Wednesday, Parilla said, they saw a long queue of churchgoers waiting for their turn to get inside the Basilica. Most of the churchgoers were able to enter the Basilica’s premises around 4 p.m.

Parilla said the social distancing protocol was not followed when some churchgoers tried to push their way inside the Basilica.

The police official said there was no problem inside the church as it limited the entry of churchgoers.

The CCPO struggled to control the crowd outside the church, Parilla said.

Labella appealed to the churchgoers not to bring their children. He also asked senior citizens 65 years old and above, to just listen to the broadcast of the dawn masses on social media, television and radio.

He also asked churchgoers to go home directly after the mass if they have no other reasons to stay outside.

Labella met with the officials of the Emergency Operations Center (EOC), City Councilor Dave Tumulak and the Philippine National Police on Dec. 16 to assess the first Misa de Gallo.

Despite the overcrowding in some churches, Labella is firm on his decision to prohibit the holding of dawn masses in barangay gyms and other venues outside the churches.

His decision jibed with the recommendation of the EOC, which said allowing the holding of masses in other places except churches is a dangerous move.

The position paper was signed by Councilor Joel Garganera, who is also the EOC’s deputy chief implementer.

According to the signatories, an “uncontrolled environment always poses a huge risk in the transmission of this deadly virus.”

Labella agreed with the signatories, saying, “It’s better to be safe.”

The City also sent a communication to the Archdiocese of Cebu, urging it to utilize the parking spaces of the churches to accommodate the churchgoers who cannot be accommodated inside the churches.

Labella is also considering temporarily closing the roads right beside churches so the churchgoers can use them.

He also instructed Councilors Phillip Zafra, Garganera and Tumulak to continue to meet with the police station commanders for the enforcement of the policies.

Labella said the additional policies were sent to the Archdiocese of Cebu for proper coordination.

Garganera, in an interview, said he noticed a “slight overcrowding” in churches located in the south district during the first Misa de Gallo, adding it was expected because it was the first day.

He said the authorities expect more crowds on Sunday, Dec. 20, and on the last day of Misa de Gallo on Thursday, Dec. 24.

The EOC, meanwhile, noticed that churches located in the central area of the city were “relatively compliant,” while those in the north were “very manageable.”

He said most churches were able to implement the health protocols well.

The City officials also urged the priests to include in the homily and announcements the importance of obeying the health protocols.

Cebu Archbishop Jose Palma gave a message of hope to the faithful amid the Covid-19 pandemic in his homily.

He celebrated the first Misa de Gallo at the Archdiocesan Shrine of the Immaculate Heart of Mary in Minglanilla, Cebu.

He also encouraged the faithful to overcome their fears and be strong in faith.

Palma said as long as there is life, there is still hope. (JJL, AYB, WBS)