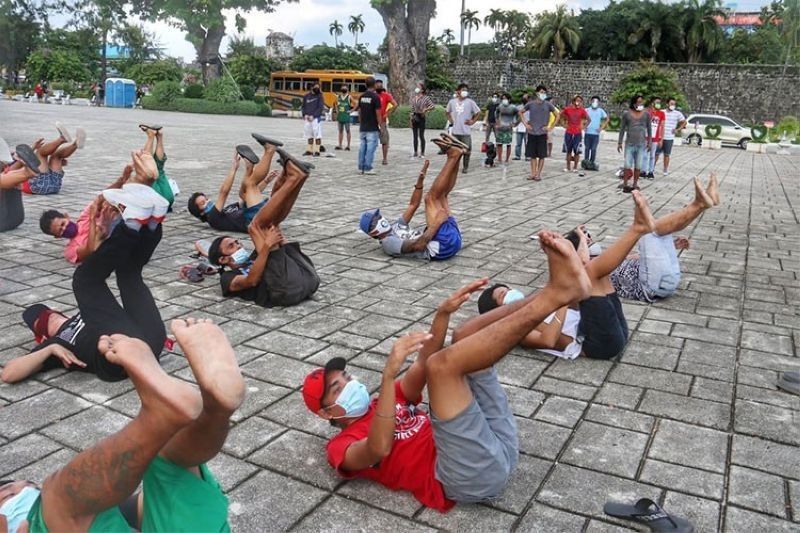 VIOLATORS. In Cebu, people who failed to observe general community quarantine protocol were made to perform exercises as penalty. (SunStar File/Amper Campana)

PHILIPPINE National Police (PNP) Chief Debold Sinas admitted Thursday, December 17, that the PNP is incapable of monitoring on social media any form of quarantine violations especially during the Christmas holidays.

Sinas said what the PNP is capable for now is to act on reports of quarantine violations they receive through text or call.

(As to monitoring social media, we don't have such capability for now, and the office is the one monitoring. What we do is we act on reports that went viral or sent to us through text.)

Earlier, former Joint Task Force Covid Shield chief Lieutenant General Guillermo Eleazar said they have created a Facebook account to beef up their cyber monitoring and to give the public another option to easily report incidents regarding violation of quarantine rules to prevent the spread of the coronavirus.

Sinas reiterated Thursday, thought, that those who will violate the prohibition on the conduct of Christmas parties will be arrested.

He said only leaders and organizers of big Christmas parties would be arrested to avoid hauling off violators to jail, which may only cause mass infection.

“Our guidance to our commanders is to disperse the gathering and bring the leaders or organizers to the police station for them to explain and face any violation,” said Sinas.

He said they are hopeful that the public would heed the call of the government to avoid mass gatherings to prevent another wave of Covid-19 cases.

The Department of Health reported on Wednesday more than 1,156 new cases of Covid-19. The number is expected to grow with the holiday season, experts said. (SunStar Philippines)