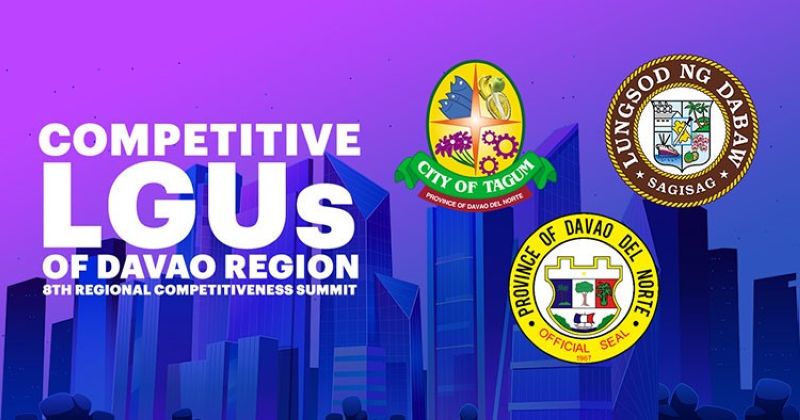 THREE local government units in Davao Region were recognized for being "competitive" cities and province in the 8th Regional Competitiveness Summit-Cities and Municipalities Competitive Index on Wednesday, December 16.

Davao City was declared as the second Overall Most Competitive Highly-Urbanized City in the Country in the 8th Regional Competitiveness Summit. This is an improvement to last year's third place.

Tagum City climbs to the third spot as the Overall Most Competitive Component City in the Country. In 2019, it ranked seventh.

Davao del Norte was also declared as the second Overall Most Competitive Province, an improvement from 2019's sixth place.

The announcement was coursed through via Facebook Live by Trade and Industry Secretary Ramon Lopez who also led the awarding ceremonies.

Davao City ranked next to Manila with Pasay City in third place. The three highly-urbanized cities bested 30 other cities in the same category.

Davao City placed second in Economic Dynamism considering factors such as the size of the economy, sources of material, the structure of the economy, safety compliance of businesses, cost of living financial deepening involving the number of financial institutions within the city and number of people employed.

Davao City also placed second in Government Efficiency, which refers to the quality and reliability of government services and government support for effective and sustainable productive expansion. Some of the indicators for this are the capacity of health services, the capacity of schools, security, business registration efficiency, and others.

It is consistently ranked among the Top 5 list of highly-urbanized cities since 2015.

Meanwhile, Davao del Norte Governor Edwin Jubahib said in a press statement the recognition shows that the National Government saw the efforts of the provincial government in improving and changing the lives of its constituents.

This can be used as a tool by the local government officials to assess the competitiveness of their city or municipality and identify areas for improvement and collaboration. This also helps provide insight for policy-making, development planning, and investment promotion.