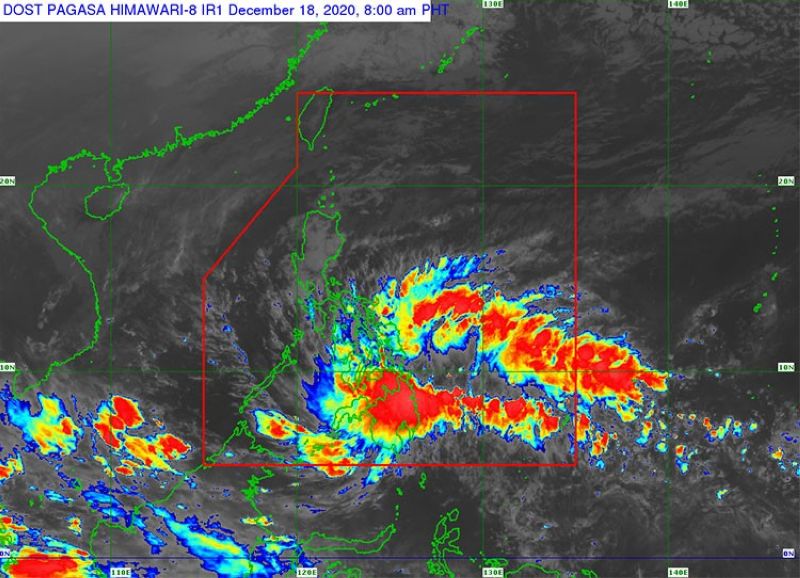 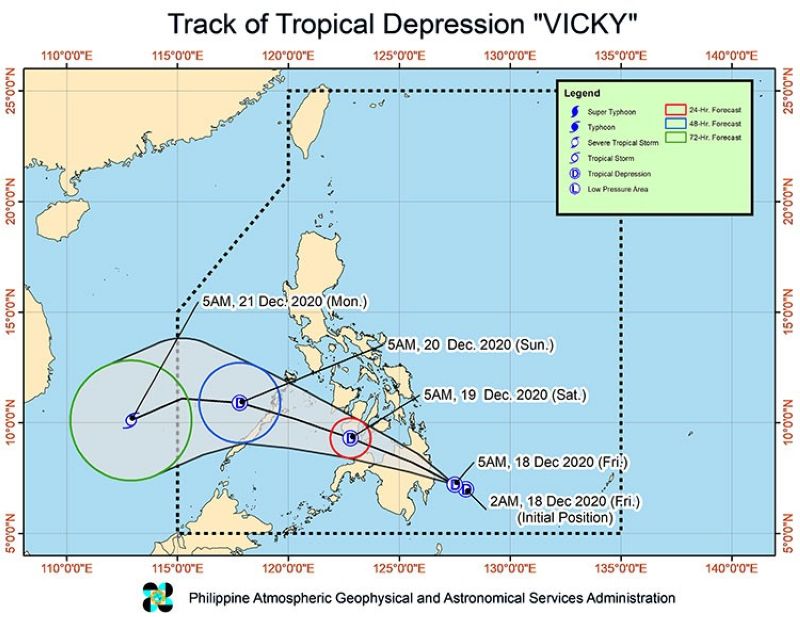 SEVERAL areas in the country have been placed under storm signal as Tropical Depression Vicky continues to move west-northwestward toward the Davao Oriental-Surigao del Sur area Friday, December 18, 2020.

In its 8 a.m. Friday weather bulletin, the Philippine Atmospheric, Geophysical and Astronomical Services Administration (Pagasa) said Vicky is forecast to move generally west-northwestward and make landfall in the vicinity of Davao Oriental-Surigao del Sur area in the next 12 hours.

As of 10 a.m. Friday, Tropical Cyclone Wind Signal (TCWS) Number 1 has been hoisted over the following areas:

Pagasa said these areas will have strong breeze to near gale conditions during the passage of the tropical cyclone.

As of 7 a.m. Friday, the center of Vicky was estimated based on all available data at 185 kilometers east of Davao City. It was packing maximum winds of 45 kilometers per hour (km/h) near the center and gusts of up to 55 km/h.

It added that Vicky, after crossing Mindanao, is likely to emerge over the Bohol Sea early morning Saturday, December 19, pass close or over Siquijor, and make another landfall over the southern portion of Negros Island.

By Saturday morning or afternoon, Vicky is likely to emerge of the Sulu Sea, Pagasa added.

The weather bureau also forecast Vicky to remain a tropical depression while crossing the Philippine archipelago.

But it advised the public to take precautions as the combined effects of Vicky and the tail-end of a frontal system will bring moderate to heavy with at times intense rains over Caraga, Davao Oriental, Davao de Oro, Davao del Norte, Bukidnon, Misamis Oriental, Camiguin, Southern Leyte, Leyte, and Bohol.

Light to moderate with at times heavy rains are also expected over Bicol Region, the southern portion of Quezon, Lanao del Sur, Zamboanga del Norte, and the rest of Visayas, Davao Region, the rest of Northern Mindanao.

On Sunday, December 20, Pagasa said moderate to heavy with at times intense rains will prevail over Bicol Region, Eastern Visayas, Central Visayas, Quezon, and the northern portion of Palawan including Calamian and Cuyo Islands.

Light to moderate with at times heavy rains will also be experienced over mainland Cagayan Valley, Apayao, Kalinga, Mountain Province, Ifugao, Bulacan, Metro Manila, Camiguin, Dinagat Islands, and the rest of Calabarzon, Mimaropa and the Visayas.

Pagasa also warned of flooding (including flash floods) and rain-induced landslides during heavy or prolonged periods of rainfall, especially in areas identified to be highly or very highly susceptible to these hazards and in localities that received significant antecedent rainfall over the past couple of days or weeks.

Adjacent or nearby areas may also experience flooding in the absence of such rainfall occurrence due to surface runoff or swelling of river channels, it added,

Moderate to rough seas will be experienced over the coastal waters of areas under TCWS 1. Sea travel is risky over these waters especially for small sea vessels, Pagasa added. (Laureen Mondoñedo-Ynot)