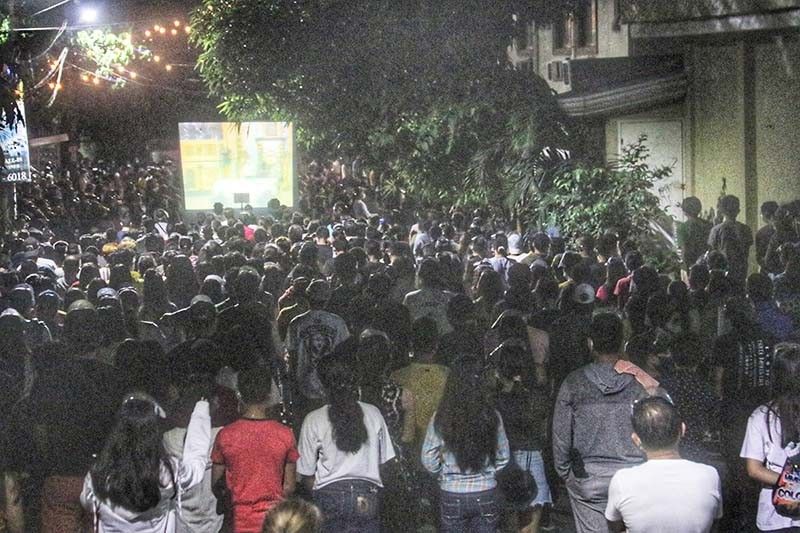 DAWN DEVOTEES. A large crowd gathers outside the Archdiocesan Shrine of St. Therese of the Child Jesus Parish in Barangay Lahug, Cebu City during the second day of the Misa de Gallo on Dec. 17, 2020. / Amper Campaña

CEBU City Mayor Edgardo Labella has expressed concern about a possible spike in coronavirus disease 2019 (Covid-19) cases because of the huge crowds during the first two days of the Misa de Gallo and Simbang Gabi.

Labella said while he respects the devotion of his constituents, the incidents of overcrowding in several churches in the city, especially during the dawn masses, are a cause for concern.

He has asked all the concerned departments, particularly the City Health Department and the Emergency Operations Center, to prepare for the possibility that Covid-19 cases will increase after the holidays.

He said that even though the City currently had only 88 active cases, he expects a surge in Covid-19 cases after the holidays because of the overcrowding in the churches.

Labella, however, noted that some parishes that had overcrowding problems on the first and second days of the Misa de Gallo on Dec. 16 and 17, 2020, respectively, had seen improvements on the third day.

The Misa de Gallo is a popular Catholic tradition of attending nine dawn masses leading up to Christmas Day. Schedules for the Simbang Gabi, or anticipated masses usually done at 7 p.m. have been allowed in an effort to lessen the crowd that gathers during the dawn masses.

“It seems the public has heeded our protocols now. Hopefully, they will continue to heed it. Even though we have only 88 active cases, we cannot be complacent,” Labella said in Cebuano.

He also called on the parish officials and law enforcers to strictly implement the “No Mask, No Shield, No Mass” directive.

For his part, Cebu Archbishop Jose Palma has urged the faithful to follow the protocols of the Inter-Agency Task Force for the Management of Emerging Infectious Diseases by maintaining social distancing and wearing masks and face shields while attending the Misa de Gallo and Simbang Gabi.

In a press conference on Friday, Dec. 18, Palma thanked the faithful for showing their devotion with their attendance during the start of the Misa de Gallo but reminded them to abide by the health and safety protocols prescribed by the local government and health authorities.

“Because as we say, while we try to worship God, let us also try to take care and contribute and be an instrument to maintain the safety of ourselves and other people. It’s proven that the more people that come together without distancing, the greater chances of Covid cases having another wave,” Palma told reporters.

He said the churchgoers who are able to get inside the churches follow the health protocol of social distancing. The problem lies in how to control those who have to stay outside as the churches allow only a limited number of people inside due to the 50 percent seating capacity rule.

Palma asked the police and other law enforcement authorities to help control the crowd that spills over to the streets, of which the Church has no control.

In a related development, local officials admitted that one parish in Mandaue City failed to observe physical distancing due to the rains brought by Tropical Depression Vicky on Friday, Dec. 18.

Lawyer John Eddu Ibañez, executive secretary to Mandaue City Mayor Jonas Cortes, said churchgoers at the National Shrine of St. Joseph in Barangay Centro were forced to forgo social distancing as they sought shelter in tents at the Mandaue City Plaza due to the downpour early Friday morning.

He said some parishioners failed to bring umbrellas and had to shield themselves from the rain by staying in the tents.

City personnel tasked to ensure that health and safety protocols are followed still reminded the churchgoers to observe social distancing even in the tents.

Although the Mandaue City Plaza was not packed, the police officers limited the entry of people, especially those without umbrellas, because the tents were already full.

With the rains brought by Tropical Depression Vicky, Ibañez urged their constituents to participate in the Misa de Gallo or Simbang Gabi via livestream.

Meanwhile, the Department of Health asked church officials on Friday, Dec. 18, to strictly enforce the minimum health standards to prevent the transmission of Covid-19 with Simbang Gabi seen as a potential “superspreader event.”

In a virtual press briefing, Health Undersecretary Maria Rosario Vergeire said they are hoping that health and safety protocols will be strictly implemented inside churches.

“We cannot overemphasize the need to follow the minimum health protocols at all times. Moreover, gatherings like Simbang Gabi can easily become superspreader events,” said Vergeire.

“We will strengthen our coordination with the Catholic Church to enforce minimum health standards inside churches, especially now that there are more people frequently attending masses because of the Simbang Gabi,” she added. / JKV, WBS, KFD/with a report from SunStar Philippines