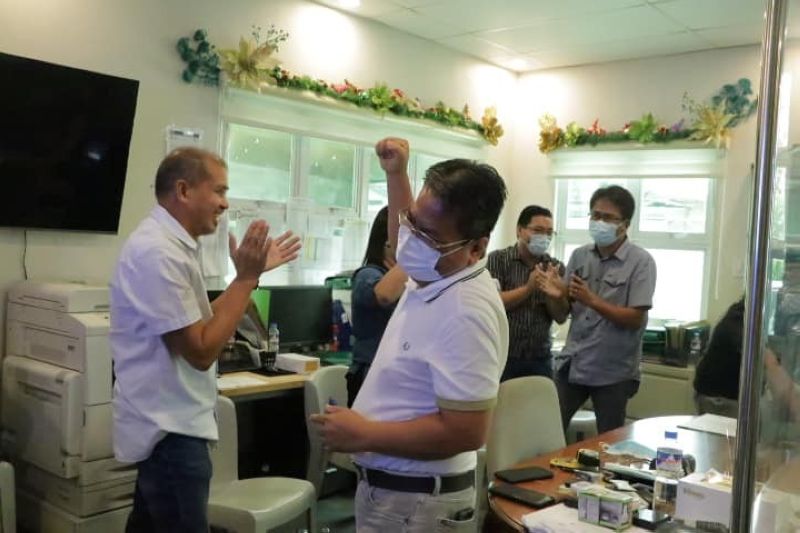 BEST 'KWENTONG LFP' LGU. Mexico Mayor Teddy Tumang (L) and his staff jubilate after being recognized by the DILG as the best in its 'Kwentong LFP' program. (Mexico MIO)

THE local government of Mexico in Pampanga has been recognized on December 17, 2020, by the Department of Interior and Local Government (DILG)-Pampanga as the best performing local government unit (LGU) for locally funded projects (LFP) under the “Kwentong LFP” program.

The Municipality of Mexico headed by Mayor Teddy Tumang was cited as the best performing LGU for the implementation of the assistance to municipalities program in 2019. Others in the “best” list are the municipalities of Apalit, Floridablanca, Sto. Tomas and Bacolor.

Mexico was also named by DILG-Pampanga as the top-performing LGU in the updating of LFP status in the “SubayBAYAN” portal, followed by the municipalities of Candaba, Porac and Arayat.

DILG-Pampanga Director Myrvi Apostol-Fabia lauded the consistent efforts of Mexico and all the LGUs in implementing the LFPs throughout the year. She noted that “amidst the limitation of sources and manpower posed by the pandemic, they still managed to finish the quality projects without compromising the safety and health of the people.”

Fabia also extended her appreciation to the LGU awardees and said that it will serve as “inspiration to other LGUs to keep up the implementation of projects and continue serving the people.”

Meanwhile, for the implementation of the 2019 Performance Challenge Fund (PCF), the best performing LGUs are Arayat, Sto. Tomas and Floridablanca.

A special award was also given to the Municipality of San Simon in optimizing the functionality of the rural health unit building project funded under the 2018 PCF, which contributed to the LGU’s effort against the Covid-19 pandemic.

A certificate of commendation was also presented to the Provincial Government of Pampanga in recognition of the significant improvement of the province in the implementation of the Conditional Matching Grant to Provinces program of the DILG.

The “Kwentong LFP” is an initiative of the DILG-Pampanga to assess and acknowledge the outstanding performance of LGUs in the implementation of timely and high-quality projects significant to the general welfare of their communities. (JTD)