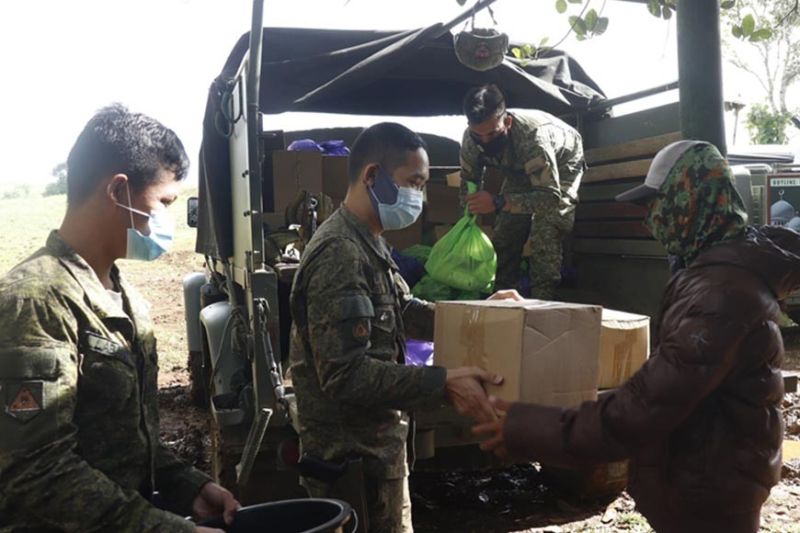 ZAMBOANGA. The Army’s 82nd Infantry Battalion has distributed boxes of goodies to former members of the ISIS-inspired Dawlah Islamiya to convey to active members of the group that the government is open to accepting anyone who wants to surrender and give way to peace. A photo handout shows one of the beneficiaries (right) receiving a box of goodies that include hygiene kits. (SunStar Zamboanga)

THE Army’s 82nd Infantry Battalion (IB) has distributed goodies to former members of the Islamic State for Iraq and Syria (ISIS)-inspired Dawlah Islamiya in Lanao del Sur, an official announced.

Altre said that the beneficiaries are those Dawlah Islamiya members, who peacefully surrendered to the government in separate occasions in Lanao del Sur province and other areas.

“This activity is one of the unit's initiatives to convey to active members of the said group (Dawlah Islamiya) that the government is open to accepting anyone who wants to surrender and give way to peace,” Altre said.

He said the distribution of goodies is part of his unit’s continued support to former members of Dawlah Islamiya in partnership with the Balay Mindanao Foundation Incorporated.

Meanwhile, the 82IB has conducted series of Youth Sector Symposium this week in the towns of Piagapo and Balindong, Lanao del Sur.

Altre said that the most important aspect that were imparted to the participants were the ills and evils of religion related violent extremism that is the root cause of rampant criminality and lawlessness.

He said that two former rebels shared their experiences that gave the participants insights of the gruesome reality of being a mujahedeen with the wrong understanding of Islam as a religion. (SunStar Zamboanga)