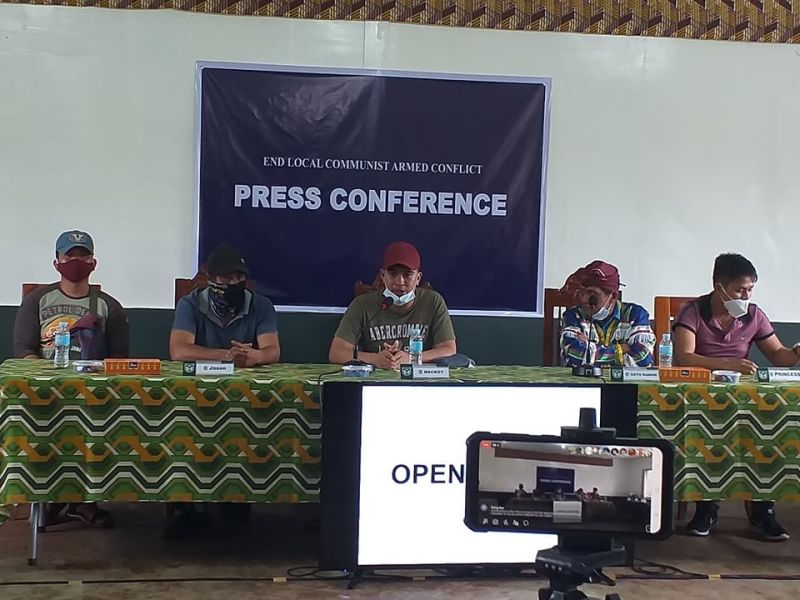 IN TIME for the 52nd anniversary of the Communist Party of the Philippines-New People's Army-National Democratic Front (CPP-NPA-NDF) last December 26, 2020, five of its former members, who were presented to the media, denounced the inequalities and deceit they have experienced in the underground movement.

Speaking before the media at the 1002nd Brigade Advance Command Post in Magpet, North Cotabato, "Kaubang Jason" or Ka Jason said he was deceived to join the NPA because of its promise of "Suporta sa Pamilya" or Supamil, which was supposed to be P800 per child but only a maximum of four children will be given support or P3,200 per month.

Since Ka Jason has five children, he was expecting to get the full P3,200 as Supamil, but instead, he only got P2,500.

(Supamil is indeed true but not equal. As for me who has five children, I only received P2,500 while Joel, who only had two children, is receiving P6,000. Those who are in the higher cadre receive a higher amount.)

He also said he was promised free education for his children, but it was not materialized.

Ka Jason, who was under the Special Section Guerilla Unit, Guerilla Front 53 of the Sub-Regional Command (SRC) 3, Southern Mindanao Regional Committee (SMRC), was in the movement from 1987 until 2019, but his position was never promoted.

Ka Princess, who joined the movement in 2015 until 2018 under the Pulang Bagani Command (PBC) 1, SMRC 3, also reiterated the inequalities and deceit in the movement.

(They say this revolutionary taxation will be returned to the people, but that's not true! The CPP-NPA-NDF propaganda is a big lie! There are billions of money in the hands of the communist party, but the question is, were they able to provide for the needs of the people? Were they able to provide accessible roads in the community especially to the farming sector? No!)

For Ka Mackoy, who joined the movement in 2010 and surrendered in November 2020 holding the position of secretary of the SRC3, SMRC, it was the promise of free education that lured him to become a member of the NPA. He was an active member of legal youth organizations during his college days, but he stopped studying when he was in third-year college as he became a full-fledged member of the NPA.

Ka Mackoy said he realized that the Philippine government is doing its best to provide free education for all, which he did not find in the movement.

The three were joined by two other former rebels, Datu Ramon alias Ka Henry, who was promised to be aided in their ancestral domain issue, and Ka Aguila, who was also promised a land title. Both said the CPP-NPA-NDF's promises remained promises until they surrendered.

All of them become the beneficiaries of Bala to Pala, a government's livelihood program for the rebel-surrenderees, which is part of the Enhanced Comprehensive Local Integration Program.