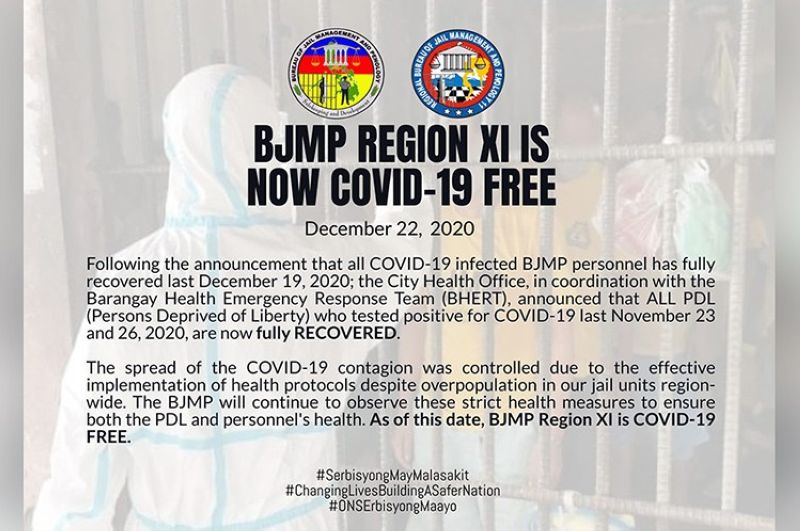 "The spread of the Covid-19 contagion was controlled due to the effective implementation of health protocols despite overpopulation in our jail units region-wide." (BJMP-Davao)

AFTER having a Covid-19 outbreak in the congested Davao City Jail in Barangay Ma-a, the Bureau of Jail Management and Penology-Davao Region (BJMP-Davao) announced that the city jail is "Covid-free" after all its personnel and PDL (Persons Deprived of Liberty) have fully recovered.

In an issued statement, BJMP said all of its eight personnel who tested positive on November 23 and 26, 2020, have fully recovered. This was announced earlier on December 19.

They said all personnel have completed their mandatory quarantine with negative swab tests results.

While on December 22, all of 68 PDLs who tested positive, also on November 23 and 26, have now fully recovered.

"The spread of the Covid-19 contagion was controlled due to the effective implementation of health protocols despite overpopulation in our jail units region-wide," BJMP-Davao said in a statement.

The agency added that it will continue to observe these strict health measures to ensure both the PDL and personnel's health.

The outbreak was reported inside the city jail after having a first Covid-positive PDL who died at the Southern Philippines Medical Center (SPMC) after being diagnosed with pulmonary congestion secondary to end-stage renal failure.

A total of 76 confirmed cases were recorded after having close contact with the deceased PDL.

As of press time, all jail facilities, except for Davao City, have no recorded coronavirus transmission among inmates, although one jail personnel in the Lupon District Jail in late June tested positive.

Despite the reported outbreak, jail management is continually coordinating with different health officials to address the situation.

"The Bureau of Jail Management and Penology is in control of the situation as we have already long-established contingency plans for these cases," BJMP-Davao said. (RGL)