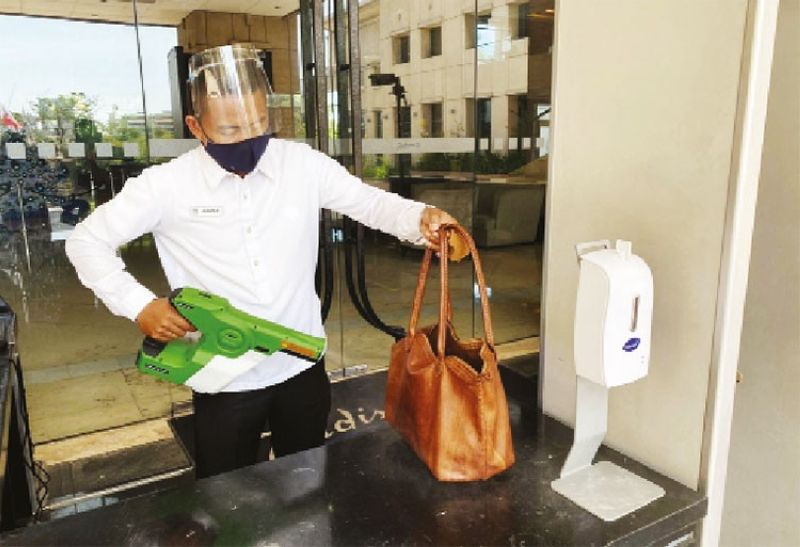 THE CALL OF THE TIMES. Even while losing a lot from the absence of foreign and local tourists, the accommodation sector has been forced to shell out money to invest in safety and security measures as part of the new ways of doing business under the new normal. (Katlene P. Cacho)

CEBU'S tourism sector had been dubbed an "industry superstar" in 2019.

But a few months after, in March 2020, what was once the glory days of tourism and travel quickly vanished, crippling Cebu's local economy, displacing hundreds of thousands of workers and disrupting the operations of thousands of businesses that heavily relied on it.

2020 was a difficult year for the industry.

According to Lance Gokongwei, president of budget carrier Cebu Pacific, 2020 would have been another "great year" for tourism and travel, banking on last year's stellar gains. It captured 12.7 percent of the country's gross domestic product. Stakeholders said one tourist creates 24 jobs in the tourism supply value chain.

Cebu Pacific's revenue dropped 70 percent year-on-year during the first nine months of the year to P19.3 billion as limitations on frequency of flights and varying requirements and processes from local government units continue to be a challenge. Passenger revenues were down 74 percent.

The year 2020 also exposed the vulnerability of hotels and resorts to the global health crisis.

Sheraton Cebu Mactan Resort was supposed to open its paradise this year, but this has been moved to 2021 due to the pandemic and its effect on foreign arrivals. Dusit Thani Mactan Cebu Resort, which officially launched in December 2019, had to temporarily close its facility adhering to the government-mandated lockdown.

During the easing of the quarantine restrictions, hotels and resorts gradually reopened. But while losing a lot from the absence of foreign and local tourists, players were forced to invest in safety and security measures as part of the new ways of doing business under the new normal.

Aside from that, they offered lower room rates to entice locals to stay in their properties. Room offers stood as much as 70 percent off for an overnight stay.

Other hotels also offered the "work-from-hotel" concept, inviting work-from-home employees to bring their office jobs to a hotel, banking on a strong and reliable internet connection.

"We looked for alternatives to survive. We look forward to 2021 to be much better," said Carlo Suarez, president of the Hotel, Resort and Restaurant Association of Cebu.

"We are more on a digital and web-based approach now because fear of the virus is still there," he said.

From January to June 2020, Cebu's tourism industry suffered P87 billion in foregone revenues. The figure for the second half of the year should now be a little lower following the reopening of the accommodation facilities and tourism destinations and the resumption of some local and international flights.

Amid the challenges faced by the industry, the pandemic has created a stronger support system.

According to Department of Tourism (DOT) 7 Director Shahlimar Tamano, the crisis brought the private sector and the government agencies together to save the industry from complete devastation.

"Everyone became close. All government officials and staff from all agencies had a direct line to each other to help the different affected sectors," he said.

The DOT 7, in particular, helped 50,000 stranded tourists go back to their homes.

In a recent report, the Bureau of Immigration (BI) reported a 79 percent drop in the number of international travelers who entered the country this year as a result of the Covid-19 pandemic.

BI Commissioner Jaime Morente said BI statistics showed that more than 3.5 million passengers arrived in the Philippines from January to Dec. 25, 2020, compared to the 16.7 million who came in 2019.

Of those who arrived this year, some 2.03 million were Filipinos while 1.54 million were foreigners, a big drop compared to the 8.7 million Filipinos and 7.9 million foreigners who entered the country in the same period last year.

Morente said the 13-million drop in figures is not surprising, considering the worldwide drop in international travel.

This drop in figures is expected to be challenged as the world is facing a second wave of the Covid-19 transmission.

The United Kingdom (UK) earlier identified a fast-spreading new variant of coronavirus that is 70 percent more transmissible than existing strains.