Out of sight, nearly forgotten Filipino farmers still have to see a glimmer of hope 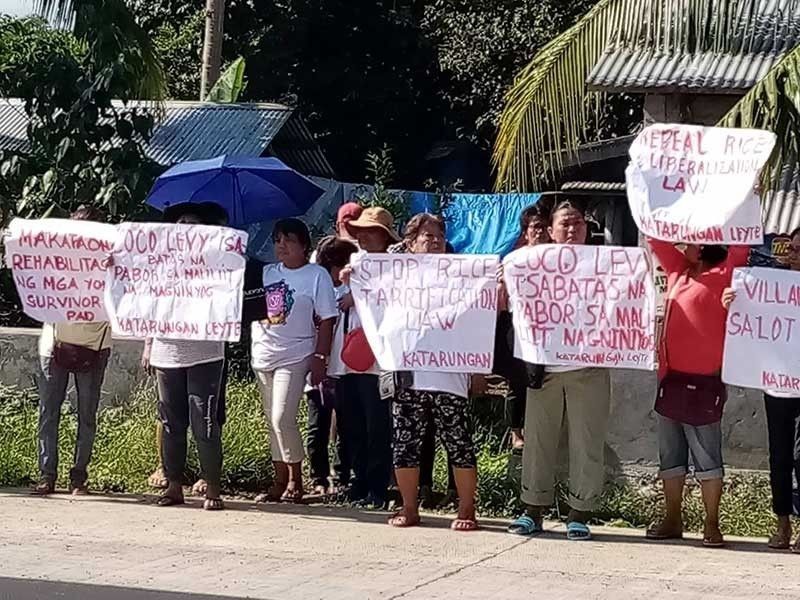 DHON DAGANASOL, 49, admitted that “being a farmer is difficult and even more difficult today.”

“Because of climate change, the weather is getting more unpredictable,” said Daganasol as he recalled how the 2013 Super Typhoon Yolanda (Haiyan) and other succeeding typhoons leveled his farm in Carigara, Leyte.

“As 2020 is about to end, it is sad to know that the pandemic is still with us," he added, citing how the coronavirus disease (Covid-19) "greatly affects" the small farmers because of lockdowns.

While the government said it is doing its share to uplift the lives of the farmers, Daganasol said they have not received enough.

Lita Bagunas, 57, is also calling for both decent housing and agricultural assistance for the farmers in Eastern Samar.

“In 2013, Yolanda destroyed our lives, livelihood, and houses. But the government is not giving us a sustainable recovery program for us to really be back on our own feet,” said Bagunas, who is leading the farmer group Uswag Este-Katarungan (Kilusan Para sa Tunay na Repormang Agraryo at Katarungang Panlipunan).

She said the government has a responsibility to speed up the titling of their lands to secure their livelihood.

‘Farming is no longer fun’

In a documentation by Katarungan, Caradilla is just one of the small coconut farmers in the South Bondoc Peninsula who is facing multiple crises due to extreme weather events and persistent poverty which often make life more miserable.

Danny Carranza, veteran land rights advocate and member of Katarungan, said the economic situation of the coconut farming community already took a sharp dive some years ago due to unfriendly global market conditions.

“Despite unfavorable market conditions, farmers continue to rely on coconut trees as they had difficulty developing other crops due to the government's lack of investment on diversification of crop production,” said Carranza, who is a coconut farmer himself.

“The reality, however, is that, in some areas, coconut farmers are a lot poorer due to constant devastation caused by typhoons, which are manifestations of climate change,” he added.

Due to lack of resources, Carranza said many areas devastated by typhoons are not given the proper assistance for recovery and rehabilitation and simply for being out of sight.

“Hard-to-reach and isolated communities normally suffer from lack of attention for being out of government sight and media attention during disasters,” he said.

“This happens because the usual focus of humanitarian response is on those with areas with the most dramatic images of destruction,” he added.

According to Carranza, “those in isolated areas, unreached by media attention and even by humanitarian organizations, suffer in silence, and usually take it upon themselves to survive.”

The farmer leader urged that the situation should prompt the government to take urgent steps in helping especially the poorest devastated communities.

“Strong typhoons that now come in more regularly had other plans for coconut farmers. The lockdowns caused by pandemic also took away job opportunities in urban areas, and isolated many coconut farmers from their traditional markets,” he added.

Carranza took the case of the South Bondoc Peninsula, composed of Buenavista, Mulanay, San Andres, San Narciso and San Francisco, in the province of Quezon "as a case in point."

Hard hit by typhoon “Nina” some years back, and by Typhoons “Tisoy,” “Ambo,” “Quinta,” “Rolly” and “Ulysses” within a span of less than a year, Carranza said the presence of humanitarian responders in this area has been hardly felt.

“Even recovery and rehabilitation plan by government agencies are unheard of in these areas despite the destruction caused by typhoons,” the land rights advocate said.

“Yet the sufferings last for years. Without a coherent recovery plan, victims of typhoons are left on their own to return to some semblance of normalcy,” he added.

In their rapid assessment in the area of landfall in the boundary of the towns of San Narciso and San Andres, Carranza said coconut farmers from six adjacent barangays estimate that at least 3,000 hectares of coconut lands were devastated, with recovery estimated at between two to four years.

The group noted that some 400 hectares of ready to harvest lowland and upland rice were also destroyed, while more than 200 houses were totally damaged and 900 houses were partially damaged from the said areas alone.

Those who have returned to the place after years of struggle for decent work in the urban area also found themselves wondering what to do next, according to Carranza.

The group documented the struggle of their own local leader Renan Sandagan, from Busuk-Busukan, San Narciso.

“We thought we could start a good life in our village because we already have the CLOA (Certificate of Land Ownership Award). But it is difficult to start again after successive typhoons,” he told their group.

According to Carranza, the struggle for survival leads many of the farmers to take chances in the urban centers best described as “pakikipagsapalaran”.

“Rightly so, as many of the coconut farmers take the first opportunity to earn even with the hardest menial and difficult work available,” said Carranza.

Dindo Divida, the main leader of Katarungan in the area, said that some 200 residents in their place were heading to Batangas to earn a living even through the “Sakada” system.

Sakada or cut-and-load sugarcane plantation work is a seasonal job that comes during sugar milling season (November – May) under a quota system of per-ton-payment.

Carranza, however, said it will be short-term employment.

According to Carranza, hunger will intensify and farmers don’t know where to turn to for food in the next coming months.

“We are pricking the conscience of the national government because they are not giving enough attention to the Bondoc Peninsula where farmers are in a difficult situation, ” Carranza told Sunstar Philippines.

Now that the coconut levy appears to be on express lane in the less than two years of the Duterte administration, Carranza hoped for coconut farmers to benefit from the coconut levy in the next few months.

On December 14, 2020, the congressmen approved House Bill (HB) 8136 or the Coconut Farmers and Industry Trust Fund, which seeks to let poor coconut farmers benefit from taxes collected from them decades ago.

The Senate version of the bill was already passed in October.

The bill aims to increase the income of coconut farmers, alleviate poverty and promote social equity, and rehabilitate and modernize the industry towards farm productivity.

Under the proposed legislation, the trust fund will be maintained for 99 years under the Coconut Farmers and Industry Development Plan to be formulated by the Philippine Coconut Authority (PCA).

"This is a monumental day for more than three million coconut farmers who have long been denied of the fund that rightfully belongs to them," said House Speaker Lord Allan Velasco as he lauded his fellow lawmakers for the bill’s approval.

“We look forward to seeing HB 8136 soon become a law and help change the lives of poor coconut farmers and their beneficiaries,” Velasco said in a statement.

The amount of cash now under the Bureau of Treasury is more or less P80 billion, while total cash and assets are worth around P120 billion, according to Carranza.

In its 2018 data, PCA said 69 out of 82 provinces are coconut-producing provinces in the country.

A total of 3.6 million hectares of land were also planted with coconuts, while there were 2.5 million coconut farmers based on the National Coconut Farmers Registry System.

The country had 347 million fruit-bearing trees, with 14.7 MT annual production in nut terms.

From 2014-2018, the country had P91.4 billion average export earnings from the coconut industry.

“The recovery and utilization of coconut levy fund is both an obligation of the national government. More importantly, it represents hope, maybe the only hope for small coconut farmers reeling from poverty and typhoon devastation,” said Carranza.

“For coconut farmers, and in the light of budget constraints of the government, the coconut levy fund is a low hanging fruit that can serve the purpose of systematic, comprehensive and people-center rehabilitation of poor coconut farming communities that were devastated by the recent typhoons,” he added.

While saying that “there is nothing on the horizon for hard-to-reach, nearly out of sight poor coconut farming communities,” Carranza maintained that “the poverty situation of poor coconut farming communities can only worsen unless the government takes their situation seriously and makes them direct participants in the effort to rebuild their lives.”

“This is maybe more than four years late already. But President Rodrigo Duterte’s promise to recover the coconut levy and use it for the benefit of small coconut farmers and the development of the coconut industry has become more urgent and important than ever,” Carranza said.

“2021 should be the year for that promise. Even a small fraction of the fund can go a long way in making life less miserable for small coconut farmers,” he added. (SunStar Philippines)