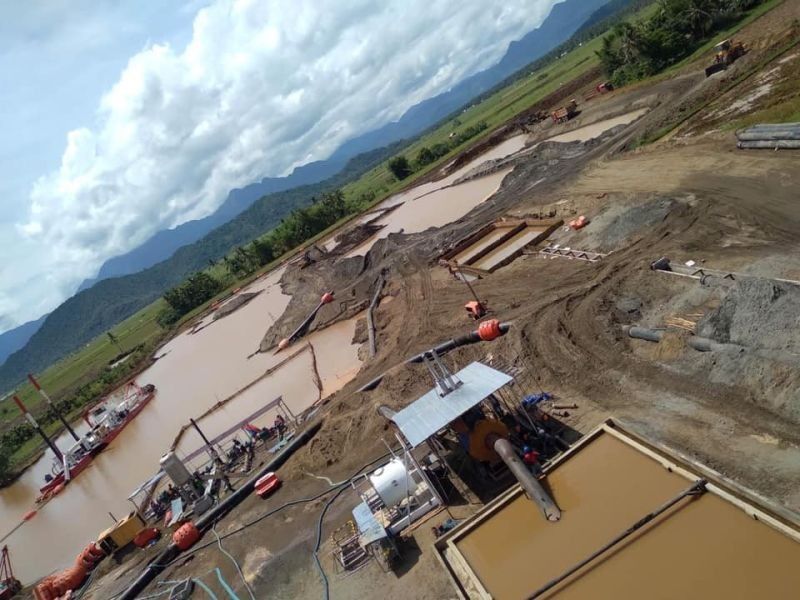 PEPITO Guimalan, 50, said he was mired in debts for many years.

Just like other residents in the sleepy village of Maya in MacArthur, Leyte, Guimalan also hoped to find a way out from poverty amid the ongoing coronavirus pandemic.

When a mining company came to their town, Guimalan said the residents suddenly found a reason to stay instead of going to Manila to look for a job.

Around 150 of the 300 villagers were hired as laborers, foremen, skilled workers, timekeepers and kitchen cooks for the women.

“They now earned a minimum salary of P325. This is even higher compared to the P200 they earned in a day’s work in rice fields,” said Guimalan.

As a farmer and a village chief himself, Guimalan admitted that he found hope in the black sand mining operation, which is being “piloted” in his rice farm.

“I was not earning in my farm for three years due to flooding and pest attack. At first, I opposed it, but I changed my mind after I saw the good things in their project proposal,” said Guimalan.

The entire village council of Maya also gave their permission to the mining company.

“Every three hectares of the mined land, the company will rehabilitate it once,” said Guimalan after he approved the MacArthur Iron Sand Project Corporation (MIPC) to lease his seven-hectare farm in the amount of P270,000 per hectare for two years.

Guimalan, however, assured that he will stop the pilot mining operation once the company will violate the agreed conditions.

The national government earlier said mining could be used to generate additional revenue for the government’s fight against the pandemic.

According to Mines and Geosciences Bureau (MGB), MIPC has mining claims of 2,300 hectares in Leyte province, covering the municipalities of MacArthur, Javier and Abuyog.

MIPC, which reportedly invested P500 million, has hired around 300 workers in MacArthur after it obtained its mining claims of around 300 hectares for three years.

The bureau reported that MIPC’s processing plant has 4,000 tons of iron sand for debugging purposes and is expected to process 8 to 10 percent of its feed with a cut-off grade of 50.

Its process is the physical separation of magnetite concentrate from raw sand via magnetic separators and sieve screens, according to MGB.

“The mining industry cares for the environment and that it always delivers especially in its commitment to help,” the bureau said.

As a village leader, Guimalan questioned those “outsiders” who opposed the mining activities in their area.

“Our lives were difficult before. Our people went to Manila to seek employment so they can send money back to their families in our village. Now, the opposite is happening. Our people in the village are now sending money to their relatives in Manila,” Guimalan said in vernacular.

“Some of our residents can now buy their own motorcycles. Other also started putting up their own stores or business,” he added.

According to Guimalan, the mining company will also help in their barangay development plan, like in their water system, school building, street lights, basketball court, and other health and infrastructure needs.

While Guimalan said they are aware of the strong criticism against mining activities, he appealed for understanding to MacArthur parish priest Amadeo Alvero and other anti-mining groups.

“The mining is already here. We can stop it once the company will not make good of their promise,” he reiterated.

“Our rehabilitation is ongoing. We will not leave any hole unfilled,” added Januar Ong, community relations officer of MIPC.

MGB-Eastern Director Leo Van Juguan assured the public that MPIC is “compliant” in their mining operations.

“We welcome any apprehensions about this project,” Juguan told reporters.

He said they are conducting regular inspection in the mining site.

Meanwhile, Engineer Israel Jerick Ortiz, MIPC general manager, said no chemical was used in the mining operation, adding that they are doing “progressive rehabilitation” in the area.

The black sand, a highly valuable mineral used in making concrete, steel, cosmetics, jewelry and other industrial products, will be shipped to China.

“To oppose mining operations, MacArtur residents have banded together under Save Macarthur, Leyte Movement (Samacamo). Among the issues raised include the lack of social acceptability and no-compliance with environmental and agricultural laws and regulations and regulations,” said lawyer Aaron Pedrosa of progressive group Sanlakas.

Pedrosa earlier said they will elevate the issue to the court following the alleged erroneous procedures in securing and granting permit to the mining company.

Alvero also continued his opposition to the mining operation after he personally saw the environmental destruction in the town, citing its “experience of irresponsible mining for many years.”

Jaybee Garganera, ATM national coordinator, added that “mining must not put at risk the food and water supply of rural areas.”

"We demand that DENR and the Office of the President immediately issue a stoppage order. Finally, this mining operation goes against the apparent recognition of the Duterte administration that we are now in a climate emergency. If this is true, then there should be less mining, and not more,” Garganera said in a statement. (SunStar Philippines)