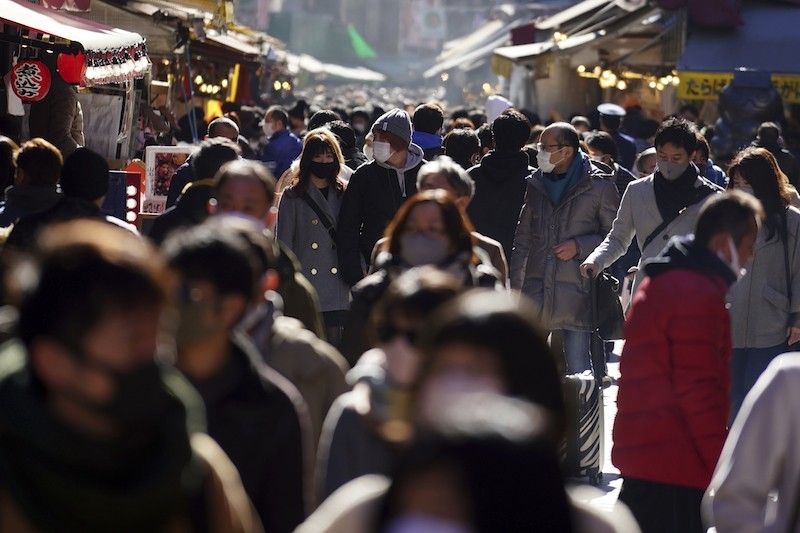 JAPAN. People wearing face masks to protect against the spread of the coronavirus walk though a shopping street Thursday, Dec. 31, 2020, in Tokyo. (AP)

THE World Health Organization (WHO) has identified four variants of Sars-CoV-2, the virus that causes coronavirus disease 2019 (Covid-19).

While most of these variants have been found to be more contagious, there is no evidence to suggest that these cause more severe forms of illness, the WHO said in a statement issued on December 31, 2020.

Increased transmissibility, however, could make control more difficult, the WHO added.

The variants are the dominant D614G, Cluster 5 among farmed mink in Denmark, the VOC 202012/01 that was first detected in southeast England, and the 501Y.V2 in South Africa.

This variant emerged in late January or early February 2020 and replaced the initial Sars-CoV-2 strain identified in China.

By June 2020, the WHO said this variant has become the dominant form of the virus circulating globally.

Based on studies, the WHO said this has increased infectivity and transmission, but does not cause more severe illness or alter the effectiveness of existing laboratory diagnostics, therapeutics, vaccines, or public health preventive measures.

A variant linked to infection among farmed mink was identified in North Jutland, Denmark in August and September 2020. This variant, referred to as Cluster 5 by Danish authorities, was subsequently transmitted to humans.

Denmark identified 12 human cases of the Cluster 5 variant in September 2020.

The WHO said it does not appear to have spread widely, but preliminary studies sparked concerns that this variant could potentially decrease the extent and duration of immune protection following natural infection or vaccination.

“Studies are ongoing to assess virus neutralization among humans with this variant,” the WHO said.

It was initially detected in southeast England and within a few weeks, replaced other virus lineages in the area as well as in London.

However, there is no change in the severity of the illness in terms of length of hospitalization and 28-day case fatality. No reinfection between variant cases was found.

Authorities announced on December 18 that a Sars-CoV-2 variant, which they have named as 501Y.V2, was rapidly spreading in three provinces of South Africa.

The WHO said South African health authorities have conducted routine sequencing since November 16 and found that this new variant has largely replaced other Sars-CoV-2 variants circulating in he Eastern Cape, Western Cape, and KwaZulu-Natal provinces.

Preliminary studies showed that this variant is associated with a higher viral load, which may suggest potential for increased transmissibility.

There is no evidence, however, of this variant causing a more severe disease or worse outcome, the WHO said.

As of December 30, the 501Y.V2 variant from South Africa has been reported in four other countries.

The WHO said all viruses change over time and the potential for virus mutation increases with the frequency of human and animal infections.

Thus, it stressed the need to reduce transmission and avoid introduction to animal populations.

Coronaviruses are known to cause the common cold and other respiratory infections.

Sars-CoV-2 causes Covid-19, which is not merely a respiratory disease as it affects people in different ways.

The most common symptoms are fever, dry cough and fatigue.

In some, the symptoms could include body aches, nasal congestion or runny nose, sore throat, diarrhea and loss of sense of taste/smell.

As of 8:23 a.m. of January 1, 2021, the virus has infected more than 83.34 million people globally, according to the Johns Hopkins Coronavirus Resource Center.

Over 1.8 million had died from Covid-19, around 13 months after Sars-CoV-2 was first reported in Wuhan City in China.