Bacolod is 'Most Improved City' in Western Visayas 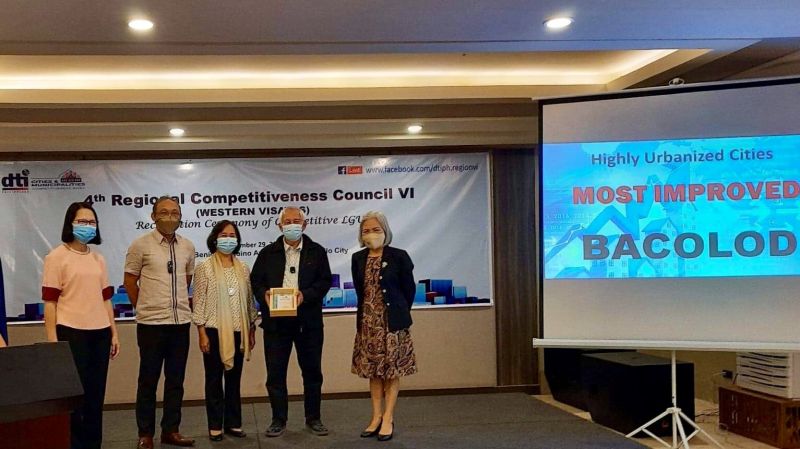 THE City of Bacolod was declared the “Most Improved Highly Urbanized City (HUC)” in Region 6 (Western Visayas) for 2020 by the Department of Trade and Industry (DTI).

The award was given to Bacolod City during the 4th Regional Competitiveness Council (RCC) Recognition Ceremony for Competitive Local Government Units (LGUs) in Iloilo City on December 29, 2020.

Aside from this major award, Bacolod City topped two of the four pillars of the 2020 Cities and Municipalities Competitive Index (CMCI). These are Infrastructure and Resiliency. The other two pillars are Economic Dynamism and Government Efficiency.

Accepting the awards for Bacolod were Local Investment Board executive director George Zulueta, who represented the mayor, and Executive Assistant Dr. Emiliano Sama.

It can be recalled that in December 2020, the National Competitiveness Council (NCC) came out with its Top 20 Most Competitive HUCs list, wherein Bacolod ranked 11th, besting Iloilo City and Cebu City, which placed 12th and 13th, respectively.

The Top 20 list was led by the cities of Manila, Davao and Pasay.

Based on this list, Bacolod is now considered the “Most Competitive City in the Visayas.”

“This is a big morale booster for the fact that we continue to rank among the most competitive cities of the country despite the serious crisis we went through in the fight against Covid-19,” Leonardia said.

“This gives us valid reasons to be optimistic. When this crisis is over, we can surely put Bacolod back on track and continue the rapid growth we were enjoying before the pandemic upset the economy,” the mayor added.

Infrastructure refers to the physical building blocks that connect, expand and sustain a locality and its surroundings to enable the provision of goods and services.

Resiliency refers to the ability of the people, households, communities, countries, and systems to mitigate, adapt to and recover from shocks and stresses in and manner that reduces chronic vulnerability and facilitates inclusive growth.

Economic Dynamism is associated with activities that create a stable expansion of businesses and industries and higher employment.

Government Efficiency refers to the quality and reliability of government services and government support for effective and sustainable productive expansion.

It may also be recalled that last year the Department of Interior and Local Government proclaimed Bacolod City as “The Best Performing LGU – City Level” in Western Visayas. (PR)