Duterte to Congress: ‘Do not tinker with PSG’ 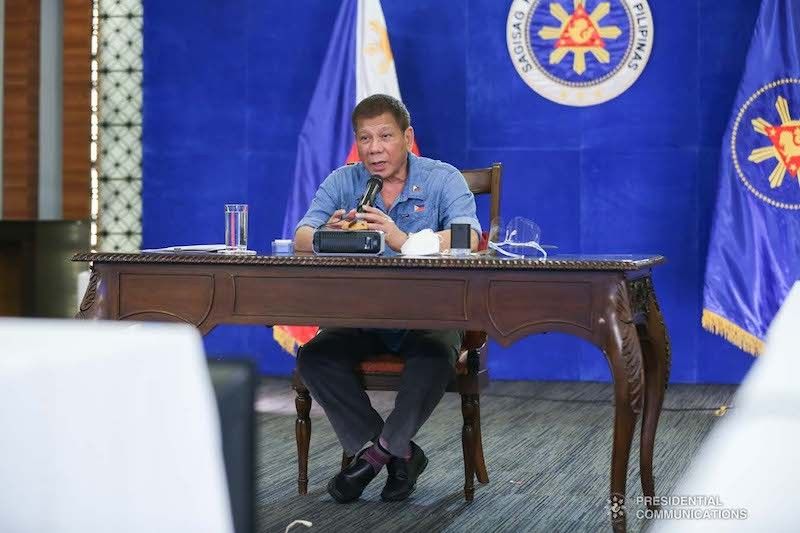 DAVAO. President Rodrigo Duterte meets with members of the Inter-Agency Task Force for the Management of Emerging Infectious Diseases at the Active Lifestyle Center in Matina, Davao City on January 4, 2021. (Malacañang Photo)

The President also directed Brigadier General Jesus Durante, head of the PSG, not to obey any summons.

He warned that there would be a “little crisis” if Congress forces the PSG officials to attend a hearing and that he would go to the Congress himself to fetch the soldiers if they are detained in contempt.

“Masyado kayong maa-ano eh. ‘Pag ginawa ninyo ‘yan (If you do that), there will be a little crisis. Nasa inyo (It’s up to you). Ako, I am prepared. I am preferred — preferred — prepared to defend my soldier. I will not allow them for all of their good intentions to be brutalized in a hearing tapos kung ano-ano,” Duterte said in a meeting with Inter-Agency Task Force for the Management of Emerging Infectious Diseases members that was broadcast towards midnight on Monday.

“Kaya ‘yan isa (That’s one). The other one is I might just decide to not allow them, to ignore your summons. So mamili kayo diyan (You choose). It’s bad for you? Sorry, I don’t care. It is bad for the country? Maybe. Pagka — basta sabi ko huwag kayong pumunta doon,” he added.

Duterte said the vaccination of PSG personnel was a "matter of self-preservation."

The PSG is an agency under the Armed Forces of the Philippines that provides close-in security to the President and members of his family.

Duterte said these men and women have to mix with the crowd whenever he has to attend an event. The military and Malacañang earlier said the PSG had themselves vaccinated as part of the measures to protect the President, who is a senior citizen and at high risk of contracting a severe form of Covid-19.

It was Duterte himself who let slip in a meeting with health officials and infectious diseases specialists on December 26, 2020 that many soldiers have been inoculated with the Sinopharm vaccine.

“Halos lahat ng sundalo natusukan na (Almost all soldiers have been vaccinated). I have to be frank and I have to tell the truth. I will not foist a lie. Marami nang nagpatusok and lahat. Up to now, wala akong narinig sa — for the select few — not all soldiers, not all soldiers, hindi pa kasi policy eh (it’s not a policy yet),” the President had said.

“If I say that I will allow them, I will allow them. But I did not because they had it on their own. Pero kung gusto kong sabihin na for emergency purposes you give the vaccines, wala ng istorya ‘yan. Wala akong i-cover-cover. Hindi ako t******** kagaya ninyo. Eh ‘yung utak ninyo mahina eh. I can order. So what would stop me by saying, “Sige pa-injection kayong lahat, all the Armed Forces?” he added.

The use of any vaccine against Covid-19 is not yet authorized in the Philippines.

An Emergency Use Authorization (EUA) is needed to allow the distribution and use of any medicine or vaccine against Covid-19.

The Food and Drug Administration (FDA) has yet to issue such an EUA. So far, only Pfizer/BioNTech has applied for an EUA in the country. The application was still being evaluated as of Monday.

Department of Health and FDA officials earlier said those who brought in and distributed the Sinopharm vaccine, which is not covered by an EUA, violated Republic Act 9711 and would be held liable.

On Monday, however, FDA Director General Eric Domingo said his office can issue a “compassionate special permit” for small groups such as the PSG.

“So for small ano po — small quantities, kahit po wala pang EUA, we can do ano po special permits for that. There’s a way po to ano — to... Naiintindihan naman po natin ‘yung importance po ‘no ng what they do and there’s a safe way to do it if kung gusto po nilang gawin,” Domingo told the President.

Initial vaccine shipments into the country are expected in March and April yet, vaccine czar Carlito Galvez Jr. told the President on Monday.

He sought to erase misconceptions over the efficacy of China-made vaccines, saying China has approved an EUA for both limited and general use for the Sinopharm vaccine. (Marites Villamor-Ilano / SunStar Philippines)