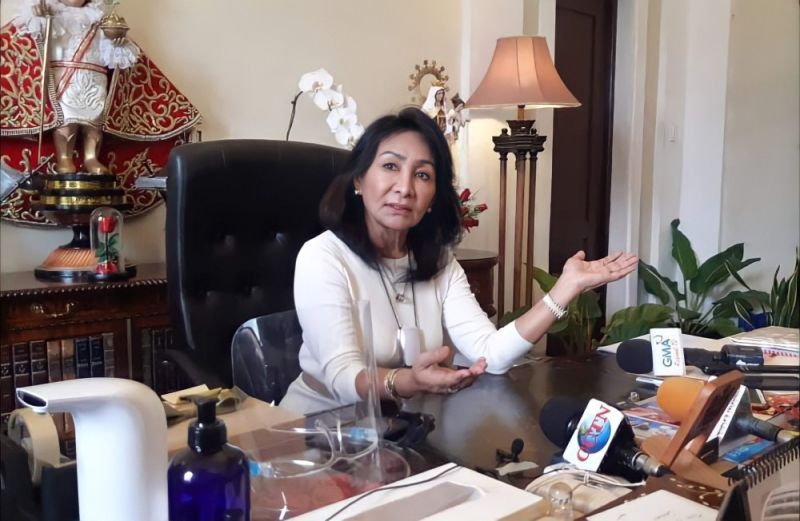 VINDICATED. Cebu Gov. Gwendolyn Garcia speaks to members of the media on Wednesday, Jan. 6, 2021, a day after she received word that she and 11 others were cleared of graft charges by the Office of Ombudsman over the 2007 bidding and construction of the Cebu International Convention Center (CICC). Now that she is no longer liable in the controversial case, Garcia plans to organize her own team to investigate the alleged sale of the CICC by Province to the Mandaue City government back in 2018. / ARVIE VELOSO

CEBU Gov. Gwendolyn Garcia is mulling to form a technical working group that will look into the state of Cebu International Convention Center (CICC) and study its recovery.

The governor’s move came after the Office of the Ombudsman overturned its previous decision and dismissed criminal charges against her and 11 others over alleged anomalies in the construction of the CICC in 2006.

In a press conference held at the Capitol on Wednesday, Jan. 6, 2021, Garcia said she is grateful to the ombudsman for its final decision, which she said could change the people’s perception.

“They will not see me as formidable, but they will see me as vindicated,” she said. “They will finally come to realize, especially katong mga rabid kaayo nga nagpataka og yawyaw (those people who rabidly spew nonsense), nga I’m not as bad as they want me to be.”

Garcia further said: “Above this all, I have the Garcia name to protect. I was raised on the principles of honesty, integrity and value for hard work. That is how my parents brought me up and this is the Gwen you see.”

Based on the 2019 Commission on Audit (COA) report, the CICC was purchased by the Mandaue City Government without the state auditors’ approval.

The sale of CICC happened during the time of then governor Hilario Davide III, now vice governor, and then Mandaue City mayor Gabriel Luis Quisumbing. The Capitol sold the CICC for P300 million in 2018.

The state auditors also recommended to let the officials responsible for the sale to answer their queries.

Garcia said her office already sent letters to the officials, telling them to explain to the COA.

“I am thinking of forming a technical working group, specifically to look into the CICC transaction which COA has deemed illegal and to now focus on possible recovery of the CICC,” Garcia said.

The governor said the CICC was constructed with hopes that it will open to more opportunities for Mandaue City.

After winning the gubernatorial race in 2019, Garcia vowed to recover all the Capitol-owned properties that were disposed of by the previous administration of Davide.

In April 2007, businessman Crisologo Saavedra filed a letter-complaint before the Office of the Ombudsman-Visayas against Garcia, members of the Provincial Bids and Awards Committee (BAC) and Te over alleged anomalies that occurred during the bidding, awarding and construction of the CICC.

In a 12-page decision, issued on Dec. 14, 2020 and penned by Ombudsman Graft Investigation and Prosecution Officer 3 Daniel Von Evan Panelo, Panelo said they found sufficient basis to overturn the Ombudsman’s previous issuances and dismiss the criminal charges for violation of Republic Act 3019 or the Anti-Graft and Corrupt Practices Act against Garcia and her co-respondents.

The dismissal was approved by Ombudsman Samuel Martires.

Panelo said Garcia and her co-respondents did not commit manifest partiality, evident bad faith, and gross inexcusable negligence; nor did they cause any undue injury to the government, which are elements needed to determine if a violation of RA 3019 had been committed. (ANV / KAL)