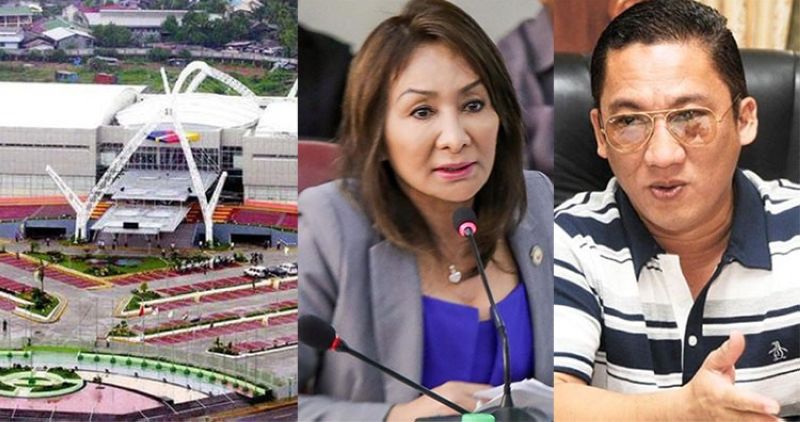 LAST Wednesday, January 6, Cebu Governor Gwen Garcia announced at a Capitol press-con she would press for Vice Governor Junjun Davide, her predecessor, to explain the Commission on Audit (COA) finding on alleged irregularities in the sale of Cebu International Convention Center (CICC) to Mandaue City government.

The three-story P830-million facility, with gross floor area of 28,000 square meters on 3.8-hectare lot, was sold in 2017, under Davide's administration.

The sale for P300 million also terminated the joint venture agreement (JVA) between the two LGUs. The city owns the lot while Capitol built the edifice. Jonas Cortes, Mandaue mayor at the time, transacted on the JVA with Gwen Garcia, then the governor. Luigi Quisumbing, who succeeded Cortes, dealt with Davide on the sale.

Last December 12, 2019, within the first year of her return to Capitol, Governor Gwen sent a letter to Davide, followed by a second letter from Provincial Administrator Noli Valencia, both of which were not yet answered.

Aside from helping enforce audit rules, as advised by COA, Garcia is also pursuing her plan to recover CICC from Mandaue. She said she is open to "negotiations" with Mandaue Mayor Cortes, with whom she forged the JVA on the facility.

ALLEGED DAVIDE VIOLATIONS. What were not followed in the sale of CICC, per the COA report?

In its 2019 audit of the transaction, COA cited the law requiring that real estate and improvements can be sold by a local government only (a) under sealed bids or (b) by negotiation if a sealed bid has failed at a price to be determined by the committee on awards, (c) with the approval by the Sanggunian and by COA in case the sale is through negotiation.

No bidding or failed bid and no approval by the COA: why, the state auditors want to know, and, the governor said this week, she will push the inquiry.

Davide and his co-officials responsible for the CICC sale may not set up as legal defense to any alleged irregularity in the construction of the building in 2006 under Governor Gwen's administration. Different acts and transactions. Besides, the ombudsman's December 14, 2020 dismissal of the charges is deemed to resolve the issues raised about the spending to build CICC.

ISSUES UNDER GWEN. In COA's audit on the CICC construction under the Garcia administration, alleged violations of the procurement law, including splitting of contracts, negotiated purchases of materials, and selective bidding and the contractor WT Construction not having posted the lowest bid.

A complaint for plunder was filed in May 2007 by businessman and "anti-graft advocate" Crisologo Saavedra against Garcia and 10 others before the Visayas ombudsman. The local anti-graft office investigated the case, looking into records of COA and other agencies, and then recommended to central ombudsman the filing of criminal charges, which the review panel and then Ombudsman Conchita Carpio-Morales approved.

The Carpio-Morales ruling would have elevated the case to the Sandiganbayan. Carpio-Morales said Garcia violated the law when she allowed WT Construction additional works worth P261.21 million "without appropriation, contract and public bidding."

However, the central anti-graft office, under Ombudsman Samuel R. Martires -- successor of Carpio-Morales who retired July 26, 2018 -- overturned the earlier decision, saying that not all elements of the crime were proved. Earlier findings of fact and law were thrown out.

WAS P300M SALE PRICE FAIR? The basic flaws in the sale of CICC to the Mandaue City Government are allegedly absence of bidding, wrongful negotiation since there was no failed bid, and lack of approval by COA. The review by COA, on top of the scrutiny by the Provincial Board, would have checked the correctness and fairness of the price.

The building and its landscaping and other ground works were "within budget" and cost "only P581 million," Gwen Garcia said at a May 4, 2007 press-con, breaking down the CICC expenses. The PB had appropriated P637 million for the project.

The cost, however, shot up when WT Construction charged Capitol for additional works that were allegedly ordered by the governor without contract or bidding. WT billed P261.217 million but the court awarded it P263.263 million, or about P2 million more, in the lawsuit for collection. That would raise the CICC total cost to P844 million although media reports place it at P830 million.

The P844 million or P830 million facility -- partly damaged by the 7.2-magnitude quake and super-typhoon Yolanda in 2013, with the grounds later occupied by fire victims -- was sold for P300 million.

Only for the building as the lot is owned by Mandaue City.

OPTIONS ON FACILITY. Would absence of COA approval and other alleged violations of the law on procurement, a legal requirement that both seller and buyer were presumed to know, be a ground to nullify the sale?

What happens next will depend on the present Capitol administrators, specifically the governor and the Provincial Board. Defects of the sale might persuade Mandaue City Mayor Cortes to negotiate with Governor Gwen on what to do with CICC. He may not be as enthusiastic as then mayor Quisumbing was about the city owning and running the facility.

Mandaue may decide (a) to return the property and get back its money or, (b) since the city owns the building and the lot, manage it jointly again with Capitol, as the two LGUs did before the sale.