Sto. Niño feast celebration in Davao City to push through 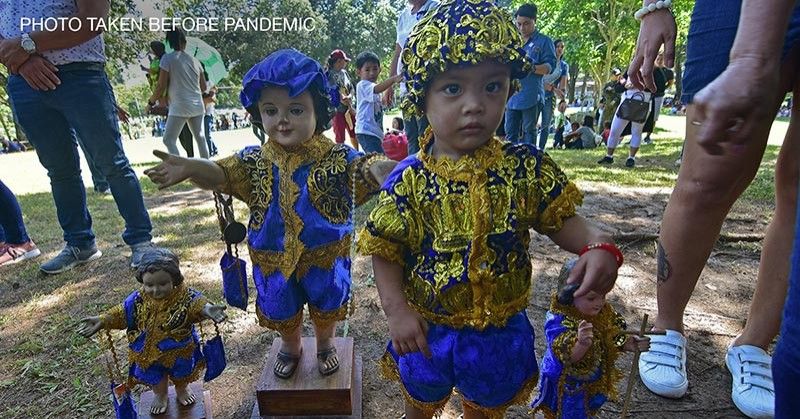 AMID the spike in Covid-19 cases in Davao City, the celebration of the feast of Sto. Niño at Shrine Hills in Matina will still push through on January 15, 2021, but several adjustments will be imposed.

Davao City Mayor Sara Duterte-Carpio confirmed this on Friday, January 8, in a radio interview, adding that security personnel will be deployed to implement the strict enforcement of minimum health protocols against Covid-19.

Duterte-Carpio said the city allowed organizers to push through with the traditional fiesta at the Holy Infant Jesus of Prague chapel in Matina just as it allowed the recent Christmas masses (Misa de Gallo and Simbang Gabi) where same measures will be implemented.

According to Executive Order 57-A, which regulates mass gatherings and prohibits non-essential travels within the city, there should be adequate ventilation in enclosed spaces, including churches and other religious venues.

In addition, the October 22, 2020 guideline of the Inter-Agency Task Force for the Management of Emerging Infectious Diseases stated that religious gatherings in areas under general community quarantine like Davao City will be allowed up to 30 percent of the seating or venue capacity.

In a separate interview, Public Safety and Security Command Center (PSSCC) head Angel Sumagaysay said they already met with the church and event organizer and they agreed that all traditional activities will be skipped and only Holy Masses will be conducted.

He said the event organizers prepared five masses from 7 a.m. to 6 p.m. on that day, where a two-hour interval will be imposed to give way to the entry and exit of devotees.

During the meeting, Sumagaysay said there is a need to limit the number of devotees who can get inside the church compound to ensure the observance of the mandatory physical distancing.

He said according to the event organizers, the traditional fiesta is being attended by around 30,000 to 50,000 devotees not only from the city but also from neighboring provinces.

"We will control the crowd this year," he said by placing an "advance command post" within the gate of the church and along Shrine Hills Road.

He stressed the need to regulate the entry of crowds going to Shrine Hills to achieve the prescribed number of devotees to get inside the church compound.

"Maong dapat na makontrol na daan sa baba sa Shrine wherein malimit nato kinsa ang pwede makasaka (That is why we have to control the crowd below the Shrine so that we will be able to limit those who can go up)," Sumagaysay said.

Within the church compound, he said they will be placing chairs with the prescribed distancing for the devotees. They will also be setting a waiting area for those who cannot get inside the chapel.

Due to the lack of space inside the compound, the city advised organizers to livestream the mass, especially for devotees who belong to the vulnerable sector, those 18 years and below and 65 above, persons with disabilities, and those who are immunocompromised.

If possible, Sumagaysay said devotees should stay at home for now as events like this are highly considered as "super spreaders" to the virus.

Based on the schedule for the masses for the Sto. Niño feast at the Shrine of The Holy Infant of Jesus of Prague Foundation, the first mass will be at 7 a.m, the second mass at 9 a.m., third mass at 11 a.m., fourth mass at 1 p.m., and fifth mass at 3 p.m.