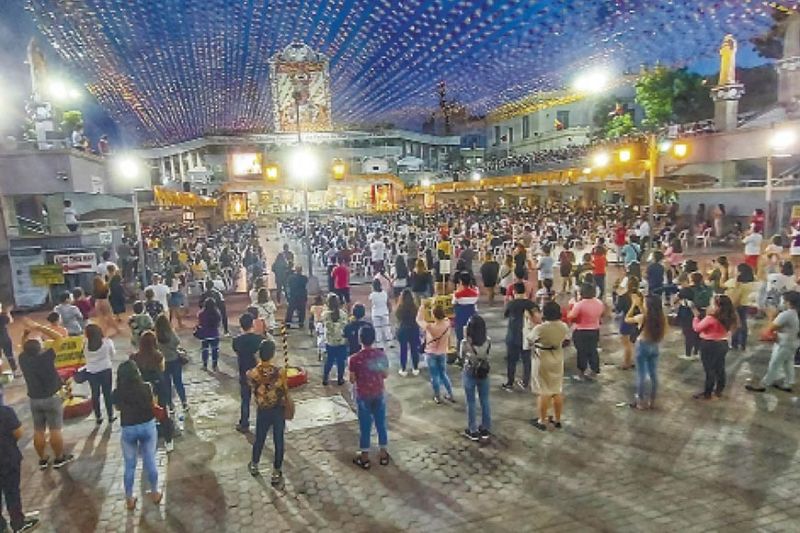 LAST CHANCE. Devotees attend one of the novena masses held at the Basilica Minore del Sto. Niño in Cebu City on Monday, Jan. 11, 2021. At 5 p.m. Monday, the Basilica’s Augustinian friars announced that for the remaining five days of the novena masses of the Fiesta Señor, there would be no more face-to-face masses. To prevent a possible increase in Covid-19 cases, the masses will be purely virtual or streamed online beginning Tuesday, Jan. 12. / AMPER CAMPAñA

BEGINNING Tuesday, Jan. 12, 2021, devotees will no longer be allowed to physically attend any novena masses at the Basilica Minore del Sto. Niño as a precautionary measure against coronavirus infections, Augustinian priests announced on Monday, Jan. 11.

The priests, Cebu City Government and the police reached a consensus to cancel the public masses.

“For the four days, we have observed that the surge of people coming to venerate and celebrate the novena masses has brought us into a conclusion that a greater action should be done to prevent us from the virus,” Basilica head secretariat Ric Anthony Reyes said, reading from their official statement.

“Having this situation in mind and moreover reminded by Christian morals that the utmost goal of the Church is to bring each and every Christian to an integral salvation, not only of the soul but also of the body which includes our health and well-being, we decided to cancel all public masses in the Basilica and to continue to celebrate through virtual or online as scheduled starting Jan. 12, 2021, Tuesday, fifth day of the novena until the Fiesta Señor, Jan. 17, 2021,” he added.

All novena masses that will be held until the Fiesta Señor on Sunday, Jan. 17, will be broadcast through the Facebook page and Youtube channel of the Basilica as well as through their media partners’ social media sites, including SunStar.

Fr. Aladdin Luzon, OSA, said the Basilica will remain open, but the public will have no access to the novena mass.

In Mandaue City, Mayor Jonas Cortes has also canceled all activities related to the Panagtagbo Festival.

Lighting of candles at the Basilica will also not be allowed.

The devotees will be allowed to pray inside the church, provided they follow the railings installed inside.

Projector screens installed in the vicinity of the Basilica will be taken down starting Jan. 12, but the barricades will remain as some devotees may still go to the church to venerate.

Luzon said other churches in the city can still hold the novena masses.

Luzon also said the visitation of the image of Señor Sto. Niño to churches in Danao City, Balamban, Ronda, Boljoon and Bantayan Island will push through.

Cebu City Mayor Edgardo Labella, in a separate interview, said he strongly supports the decision of the Basilica.

Labella said “it is very difficult to control” fervent devotees of the Holy Child.

Since Dec. 29, 2020, daily coronavirus cases in Cebu City have increased to double-digit levels.

As of Jan. 10, the number of active cases in Cebu City has increased to 353. Of this number, about two in three (or 66.55 percent) were traced to outside transmission while 31.78 percent were due to household transmission.

Cases of outside transmission came mostly from social gatherings (20.39 percent) and workplaces (18.9 percent).

Cumulative coronavirus cases in Cebu City have reached 11,134, including 693 mortalities and 10,088 recoveries.

Cebu City is under modified general community quarantine (MGCQ) until the end of January.

Mandaue City, which is also under MGCQ, is also supposed to hold the Panagtagbo Festival.

Cortes said this year’s festival would have been grand in line with the celebration of the 500th anniversary of Christianity in Cebu.

“Sometimes we have to make tough decisions no matter what,” Cortes said.

He urged the people to keep their faith in the Señor Sto. Niño despite the cancellation of the religious activities.

The Panagtagbo Festival celebrates the reunion of the Holy Family, when the images of the Señor Sto. Niño and Our Lady of Guadalupe are transferred to the National Shrine of Saint Joseph.

Aside from the religious activities, the festival also features street dancing and showdown.

Because of the pandemic, not one activity related to the festival has been held, Cortes said.

Both the Department of Health (DOH) and the Emergency Operations Center (EOC) said that the recent spike of Covid-19 cases in Cebu City was not due to the nine-day Misa de Gallo and Simbang Gabi.

"During the nine days Simbang Gabi from December 16 to 25, mapansin natin na sobrang daming tao but surprisingly the number of cases did not really come from there," said Dr. Mary Jean Loreche, spokesperson of DOH in Central Visayas.

Councilor Joel Garganera, EOC deputy implementer, said that private gatherings and other forms of gatherings triggered the spike of infections and not Misa de Gallo.

One attended the Misa de Gallo while the other three from the regular masses, Garganera said.

Loreche said there was too much people movement during the holiday.

"It can be a mixture of a lot of things but the most prominent would be, I would say that there was too much people movement during the time of the holidays -- we have shopping, mall sales, people were going to the malls, people were celebrating Christmas having a good time in the beaches, dining out in the malls-- I believe this is a mixture of all those movements," Loreche said. (JJL / KFD)