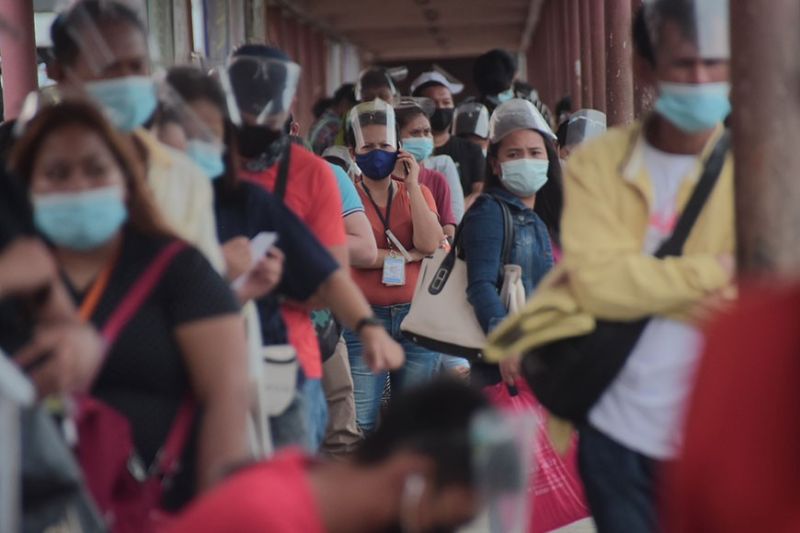 NBI. Patience is a requirement for every Dabawenyo who lined up to get their NBI clearances along J.P. Laurel Avenue, Davao City Monday, January 11. The long line even reached the nearby NCCC VP Mall. (Mark Perandos)

OLIVE Jhan V. Olivar, a job applicant, was lining up at the National Bureau of Investigation (NBI)-Davao office in JP Laurel Avenue, Davao City to get his NBI clearance since January 11, 2021, but until the following day, he was still queuing because he was caught up by the closing time of the agency.

He said he applied online and he was given an appointment date of January 11 from 12 noon upward but he was still not catered to as there were already individuals lining up earlier than him who also applied online. It was his first time to get an NBI clearance, he said.

Luis C. Sandigan Jr., an employee, needed NBI clearance for his employment. He was lining up since 8 a.m. in time when the NBI-Davao opened its office on January 12 but until 12 noon, he was still waiting in line outside the agency's office. He was one of the walk-in clients of the agency.

They were just a few of the several individuals who braved the unpredictable weather to line up and get an NBI clearance for various purposes.

Ser John S. Maglanoc of the NBI-Davao said the long queue at the agency is a usual scenario during January up to June, the "peak season" for NBI clearance issuance or renewal.

"Karon man gud ang ting-renew sa NBI clearance nga gagamiton whether for business permits or for local or overseas employment. Dili lang NBI ang ang government agency nga naay taas ang linya karong panahona kay ting-renew gyud karon (It's the renewal season of NBI clearance which will be used whether for business permits or for employment. It's not only the NBI among the government agencies which you can observe long queues because it's the renewal season)," Maglanoc said.

He said what they are doing now, as the mandate of their Regional Director Jonathan Balite, to address this concern especially that the city is grappling with the pandemic and several guidelines are imposed in a bid to curb the Covid-19 transmission, is they are limiting their clients between 250 to 300 only per day to avoid mass gathering.

They also only allow a maximum of 30 clients per transaction who can enter their compound.

NBI-Davao officer-in-charge Rebecca D. Dagatan added that there are also some factors in the accumulation of numbers of individuals lining up to get their NBI clearance.

"Parehas karon wala na'y internet since 9:58 (a.m. of January 12) dili ta ka-process sa ilang NBI, so kining uban dili ma-cater today, tomorrow na pud ni sila but priority ni sila tomorrow (Just like today, the internet connection was down since 9:58 and we cannot process their NBI clearance, so those who could not be cater to day will be catered tomorrow rest assured that they will be prioritized tomorrow)," Dagatan said.

She said that facing this scenario, they are willing to work overtime so that more people can claim their NBI clearance, as they are aware of how important the NBI clearance for those who are seeking it.

Maglanoc also advised the public not to wait for January to renew their NBI clearance to avoid the influx during this month.

"Pwede man sila maka-renew sa December, katong December wala kaayo mi tao diri. Dili man nila kinahanglan hulaton mag-expire ilang NBI clearance (They can renew in December since we don't have that many clients here during that month. They don't need to wait for their NBI clearance to expire)," Maglanoc said, adding that the NBI clearance has a one-year validity.