Agro-fishery damage due to flooding in NegOcc hit P42M 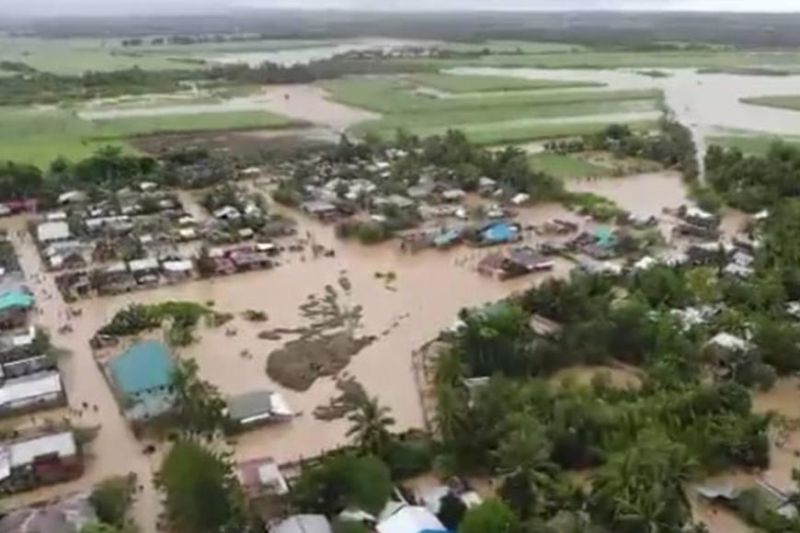 NEGROS. Damage and production losses on agro-fishery sector of Negros Occidental brought by the massive flooding have surged to over P42 million. (Cadiz CDRRMO)

THE agro-fishery sector of Negros Occidental has already incurred over P42 million worth of damage and losses just within the first two weeks of 2021 mainly because of massive flooding that hit the province.

Latest report from the Office of the Provincial Agriculturist (OPA) showed that the flash floods brought by heavy rains with strong winds last January 8 have left a total of almost P21.5 million worth of damage and production losses.

The figure covers 973 affected farmers with combined production areas of 679.64 hectares located in 54 barangays of eight local government units (LGUs) in the province.

The report covering the period from January 8 to 12, 2021 further showed that the rice sector incurred the biggest amount of damage and production losses, at about P15.78 million.

Some 141 rice farmers in 11 barangays of Valladolid were reported to incur P7.50 million in damage and losses. A total of 251.5 hectares in the southern Negros Occidental town were affected.

It is followed by Silay City with P3.75 million that covers 384 farmers with an area of 156.11 hectares in five barangays.

Sagay City incurred P2.17 million worth of damage and losses. The figure covers 262 rice farmers with a total area of 186.53 hectares in 13 barangays.

Seventy-nine farmers with 62.54-hectare rice farms in Cadiz City, and 24 farmers with 12.18 hectares in Manapla were affected.

Another badly-hit sector is the high value crops (HVC), incurring a total of almost P5.78 million worth of damage and production losses.

The OPA reported that 45 farmers with a combined areas of 3.85 hectares in four barangays of Talisay City and Silay City were affected.

Of the figure, Sagay City registered the highest amount of losses, at P250,000. This covers two units of fish cage for bangus owned by one fisherman at Barangay Vito.

"The damage is caused by strong waves," the report stated.

A unit of lift net (tangkal-tangkal) worth P180,000 and is owned by a fisherman Himoga-an Baybay in Sagay City was also destroyed by strong waves.

Still in Sagay City, a unit of fyke net (tangaban) worth P12,000 was destroyed. One fisherman in Barangay Vito was affected.

In Cadiz City, five units of shallow water fish corral (tangkop) and one unit of oyster raft (talabahan) totaling to P89,000 were destroyed by the flash flood.

A unit of motorized banca with fishing paraphernalia owned by a fisherman in Barangay Zone 3, Talisay City was reportedly damaged by the flood.

In E.B. Magalona, five units of fishing gears for crab in Barangay Alicante were destroyed by flash flood, while another motorized banca at Barangay Punao, San Carlos City was partially damaged by strong waves.

The OPA earlier reported an initial P16.5 million worth of damage to agro-fishery of five localities in the province following the massive flooding on January 1 this year.

Adding to the amount of damage brought about by the recent floods, the Provincial Veterinary Office (PVO) reported Tuesday, January 12, P1.04 million worth of losses to the province's livestock and poultry sector.

The report, covering the period of January 8 to 11, showed that the amount covers animal raisers from 36 barangays of 11 LGUs such as cities of Sagay, Talisay, Silay, Victorias, Bago and La Carlota, and towns of E.B. Magalona, Pulupandan, Pontevedra, San Enrique and Valladolid.

During the massive flooding on New Year's day, the PVO reported that animal raisers in 12 barangays of cities of Talisay and Victorias incurred almost P3.5 million worth of damage and losses.