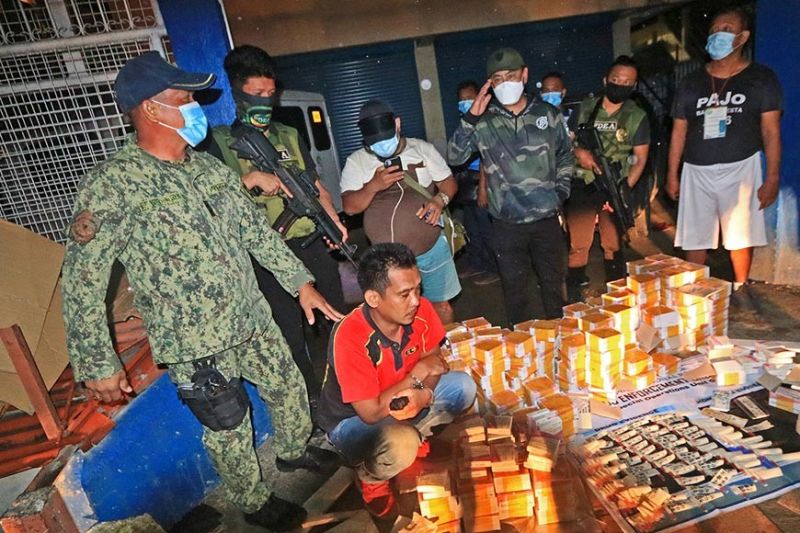 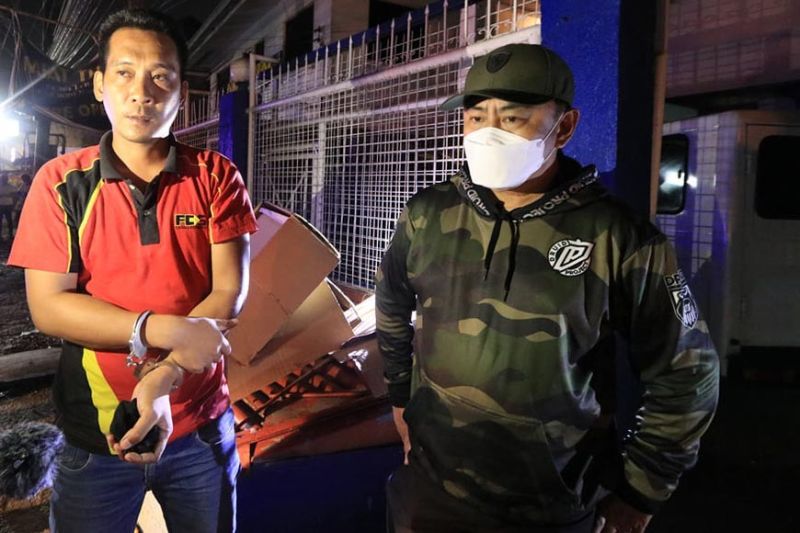 CAUGHT. Lapu-Lapu City Mayor Junard “Ahong” Chan (right) questions alleged Nubain deliveryman Dioscoro Colo after the latter’s arrest by anti-narcotics operatives in Barangay Pajo at Tuesday dawn, Jan. 12, 2021. The operatives seized 21,000 ampules of Nubain worth P5.4 million from the 33-year-old suspect, who claimed he had no knowledge that he had been delivering Nubain for a Pakistani national for about five months before he got caught. / ALAN TANGCAWAN

ANTI-NARCOTICS operatives seized around 21,000 ampules of Nalbuphine hydrochloride, commonly known as Nubain, one of the drug’s trade names, worth P5.4 million in Barangay Pajo, Lapu-Lapu City on Tuesday dawn, Jan. 12, 2021.

Philippine Drug Enforcement Agency (PDEA) 7 Director Levi Ortiz believed the drug would be distributed to junkies who plan to have fun during the Sinulog.

The PDEA 7 is also on the lookout for the possible holding of secret parties inside hotel rooms, condominium units and exclusive subdivisions as party drugs, including ecstasy, could be distributed to the revelers.

Despite the ongoing Covid-19 pandemic, Ortiz said his office has received reports about the children of rich families in Metro Cebu holding their own private parties where party drugs abound.

In the Lapu-Lapu City drug bust, the operatives caught Dioscoro “Jet” Colo, who is 33 and a native of Badian town in southwestern Cebu. The Philippine National Police Drug Enforcement Group (PDEG) Visayas was the lead unit in the operation, and its operatives were assisted by their counterparts from the PDEA 7, the Regional Drug Enforcement Unit 7, the Regional Intelligence Unit 7 and the Lapu-Lapu City Police Station 3.

The contraband seized from Colo was placed in five boxes. The suspect was reportedly connected to a cargo forwarding services branch in Lapu-Lapu City.

A female Pakistani national and her Filipino husband based in Metro Manila were the ones who reportedly sent the boxes containing ampules of Nubain through the cargo forwarding branch in Lapu-Lapu City.

“The illegal shipment was forwarded via local cargo services there in Parañaque City to its branch in Cebu, particularly in Lapu-Lapu City,” said Lt. Col. Warren Dablo, head of the PDEG Visayas Special Operations Unit 5.

The PDEG Visayas believes the drug is not registered with the Bureau of Food and Drug.

Lapu-Lapu Mayor Junard Chan lauded the operatives, saying their accomplishment proves they are not sleeping on the job.

He urged barangay captains to keep an eye on the persons conducting illegal activities.

“This is a warning to all persons engaging in illegal activities and are still staying in the city: You have no place here. The time will come that you will be arrested if you don’t stop what you’re doing,” he said in a mix of Cebuano and English.

Before Colo was arrested, the PDEG operatives had started their investigation in Barangay Kamagayan, a red light district that is also one of the havens of drug users in Cebu City.

Nubain, given by injection, is a painkiller that is popular among cash-strapped users as it is cheaper than shabu. An ampule costs more or less than P100, authorities said. One of the drug’s side effects is sedation, which includes drowsiness, dizziness and blurred vision.

Dablo said they started their investigation in Kamagayan as they wanted to locate the Nubain supplier.

Dablo declined to give details, saying they are conducting follow-up operations against Colo’s associates who are still at large.

In an interview, Colo said he did not know that he had been delivering contraband to the customers of the Pakistani-Filipino couple.

Colo said the couple is a longtime client of their forwarding services.

About five months ago, the Pakistani national approached him to cut a deal—Colo must conduct the delivery himself in exchange for P1,000 per delivery. He received his fees through a money transfer service.

The suspect said he did not know he was delivering contraband to the couple’s customers in different parts of Metro Cebu.

Colo will be facing complaints for violating Republic Act 9165, or the Comprehensive Dangerous Drugs Act of 2002. (KAL)