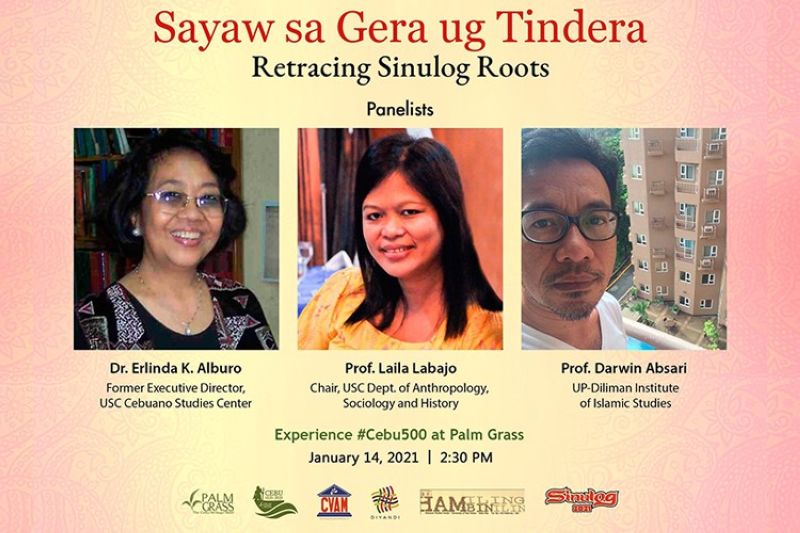 Cebu scholars and an Islamic Studies Tausug professor will look into the origins of the different versions of the Sinulog: the war dance and the candle vendors’ Sinulog in a blended event featuring an online panel discussion with live audience and performances.

USC Department of Anthropology, Sociology, and History (DASH) Chair, Professor Laila Labajo will also explore the origin of the Sto. Niño image and the development of the Cebuano devotion to the Holy Child.

Moreover, the forum will look into how Cebuano precolonial dance rituals such as those performed by the “babaylan” have been integrated into the Christian devotion to the Sto. Niño.

To recall, in a 1600’s Visayan dictionary, the Sinulog word referred only to the island of Sulu and a Tausug woman’s clothes.

University of the Philippines (UP) Diliman Institute of Islamic Studies Professor Darwin Absari will then describe the influence of Sulu in the 1500’s in the islands of what is now the Philippines.

Palm Grass The Cebu Heritage Hotel partners with the USC DASH, Hambin (Cherished Heritage), Central Visayas Association of Museums Inc. and Diyandi Heritage Center in holding the forum that will also launch the hotel’s series of activities for the #Cebu500.

#Cebu500 celebrates the 500 years of the arrival of Christianity in Cebu, the Victory at Mactan, and Cebu being part of the first circumnavigation of the world.

There will also be a re-screening of a 2020 video tracing the Sulu roots of the Sinulog created by Hong Kong-based communications specialist Prospero Laput.

The event will be livestreamed on the sponsoring organizations’ pages; and limits the physical audience to 50 participants. There will also be a Sinulog trivia quiz with prizes. (PR)