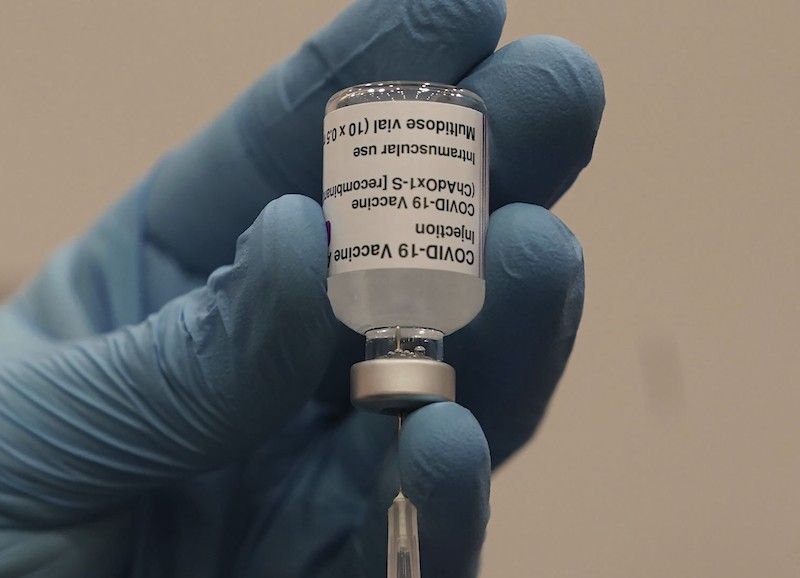 ENGLAND. A healthcare worker fills a syringe with a Covid-19 vaccine at the NHS vaccine centre that has been set up at the Centre for Life in Times Square, Newcastle. The centre is one of the seven mass vaccination centres now opened to the general public as the government continues to ramp up the vaccination programme against Covid-19. (PA via AP)

THE cities of Quezon and Makati in Metro Manila are leading the list of local government units (LGUs) that have signed advance purchase agreements with multinational pharmaceutical company AstraZeneca for the procurement of its candidate vaccine against coronavirus disease 2019 (Covid-19).

Quezon City announced on Monday, January 11, 2021 that it was increasing its purchase order to 1.1 million doses of the AZD1222 vaccine from the initial 550,000 doses.

Makati City Mayor Abigail Binay, on the other hand, announced on Tuesday, January 12, that the City Government is procuring 1.0 million doses.

They are among the more than 20 LGUs that have signed agreements with AstraZeneca, National Task Force Against Covid-19 and Department of Health as of Wednesday, January 13, 2021.

Other LGUs that have signed advance purchase deals are:

In coordination with the national government, LGUs are procuring up to 10.598 million doses of the AstraZeneca vaccine. These are expected to arrive in the country in the second half of 2021.

Presidential Spokesperson Harry Roque said each LGU will pay for the vaccine and reimburse AstraZeneca for all costs associated with delivery, distribution, storage and destruction of the vaccines prior to delivery to the destination port.

Each local plan should follow the geographical and sectoral priority list in the national plan, Roque added.

The vaccines being procured by the LGUs are on top of the 2.6 million doses that private corporations are donating to the government. Half of these will be administered to private sector executives and employees.

Each dose of the AstraZeneca vaccine costs $5, the lowest price among the candidate vaccines in the market. It is administered in two doses.

The AstraZeneca vaccine was developed in partnership with the University of Oxford.

Based on interim analysis of clinical trials in the United Kingdom and Brazil, it has been found to be 90 percent effective against Covid-19 when given as a half dose, followed by a full dose at least one month apart.

It is only 62 percent effective when given as two full doses at least one month apart, resulting in an average efficacy of 70 percent from both dosing regimens.

AstraZeneca has a pending application with the Food and Drug Administration for an Emergency Use Authorization (EUA) to allow its use in the Philippines.

Aside from AstraZeneca, Novavax through the Serum Institute of India and Sinovac Biotech Ltd. of China will also supply Covid-19 vaccines to the Philippines.

The government has signed an agreement for the purchase of 30 million doses of Novavax vaccines, which are expected in July 2021.

Sinovac will start shipping vaccines to the country in February, with an initial 50,000 doses, followed by 950,000 doses in March, and two million to three million doses monthly until December 2021. (Marites Villamor-Ilano / SunStar Philippines)