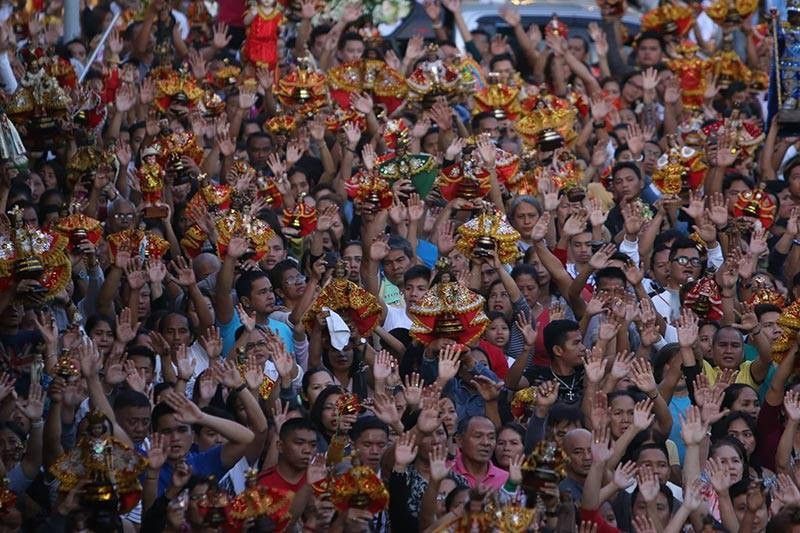 CEBU. Catholics singing along to the traditional hymn, "Gozos (Bato Balani sa Gugma)" at the Basilica Minore de Santo Niño as part of the Sinulog 2019 celebration. (Photo by Alex Badayos)

IF YOU'RE a Cebuano, then you've probably heard the traditional Santo Niño hymn, "Gozos (Bato Balani sa Gugma)." The song is popularly sung during the nine-day Novena Mass of the Santo Niño as part of the Fiesta Señor.

Bato Balani sa Gugma, which means Magnet of Love, is a Catholic song that spans six to seven minutes.

The Gozos is typically sung after the priest has said his Homily or before the offertory. The faithful sing its verses and, when the Chorus hits, everyone is encouraged to wave their hands in front of the Santo Niño in unison as an act of worship. Some even lift their images of the Santo Niño.

Frequent visitors of the Basilica Minore del Santo Niño will know that waving their hands to the Santo Niño is a gesture of saying hello/goodbye to the image and a testament of their faith in the Child Jesus.

First-time tourists at the Basilica will often marvel at the sight of the people singing the Gozos. It is one of the memories they take with them when they return home.

The song, in itself, has a trance-like quality when everyone sings it together. People will feel the atmosphere change. They get emotional. And to some, it changes their lives for the better.

Different people. Different struggles. But faith holds them together.

For C.P. Pajuay, a data processing specialist working in Cebu City, whenever she sings the Gozos, she feels a big weight has been lifted from her shoulders. She could feel the presence of the Santo Niño comforting her in times of need.

(Singing the Gozos feels great especially when sung at the Basilica. It relieves all the heavy load I am carrying. That despite all the problems I encounter in my life, I always feel grateful and I feel okay.)

Charry Lane Coronel, assistant multimedia editor of SunStar, admitted that she once cried when singing the Gozos at the Basilica. She said a void she didn't know she had deep inside her was filled by the "magical" song.

"I'm not really a devotee of the Señor Sto. Niño, but there is this one time (in 2020) nga nakahilak kog kalit while singing the Gozos. There's a different kind of feeling. A feeling for yearning for acceptance and forgiveness, and the feeling nga naay nipuno sa hollow within you," Coronel said.

J.S. Peak, a lay minister from Lapu-Lapu City, said hearing the Gozos is like being transported into another dimension, a place where only love and comfort exist.

"As a lay minister who has served during the Fiesta Señor, the sight of thousands of people singing the song and waving their hands in unison sends shivers down my spine. As a Catholic, I get emotional that with whatever trials I've experienced in my life, I know that God is always there to shelter me and my family," Peak said.

Now, with the current coronavirus pandemic, the lyrics of the Gozos speak louder than ever for Catholics.

Everyone is encouraged by the church to hear the novena mass online and to reflect on the essence of the celebration.

See the lyrics of Gozos and listen to the song.