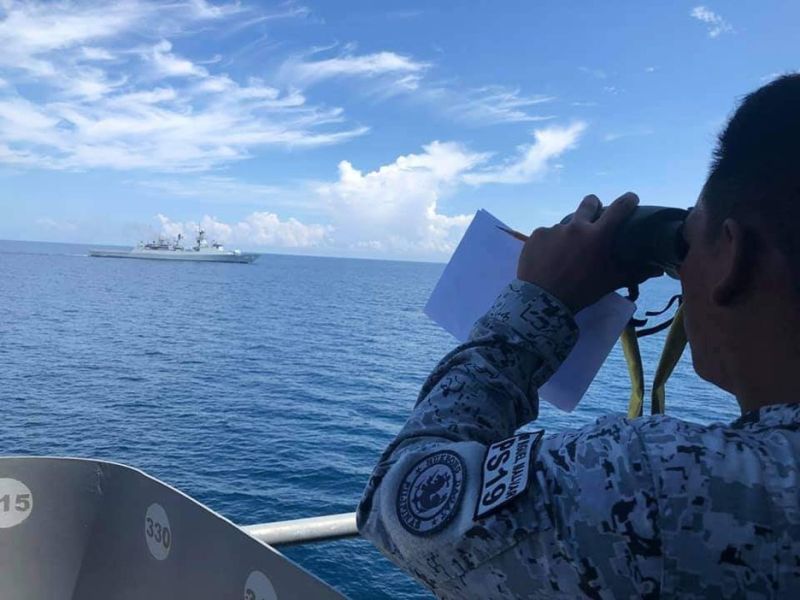 ZAMBOANGA. The Joint Task Force Tawi-Tawi intensifies the maritime patrol along the southwestern border of the country. A photo handout shows personnel of Patrol Ship-19 using a binocular to get a clear view while on patrol. (SunStar Zamboanga)

THE Naval Task Group of the Joint Task Force (JTF) Tawi-Tawi in close coordination with the security cluster of the Inter-Agency Task Force (IATF) of the province has intensified maritime patrols along the borders of the southwestern part of the country.

The JTF Tawi-Tawi said in a statement the intensified maritime patrols is aimed to prevent the entry of people from Sabah, where the new variant of coronavirus disease (Covid-19) had been recently detected.

The municipality of Turtle Islands in Tawi-Tawi has imposed a one-month lockdown effective December 29, 2020, to protect the residents against possible infection by the new strain of the Covid-19 virus.

Since then, inbound and outbound vessels are prohibited.

The Municipality of Turtle Islands is located within the Sulu Sea at the south-western tip of the country, at the edge of the international treaty limits separating the Philippines and Malaysia.

The JTF Tawi-Tawi said the intensified maritime patrol is jibed with the conduct of maritime training evolutions and naval exercises, along the Islands between Tawi-Tawi and Sabah particularly in the Islands of Saluwag, Tumindao, Omapoy, Paguan, Sitangkai, Sibutu, Sipangkot and Simunul to further enhance interoperability and magnify the prowess of the Fleet Marine team concept of operations.

The task force said the maritime patrol and exercises are in line with the persistent pronouncement and guidance from Rear Admiral Toribio Adaci, commander of the Naval Forces Western Mindanao, “to spare us from the deadly virus.”

It is also in support of the mission of the Western Mindanao Command to conduct prompt and sustained patrols in its joint area of operations, the task force said. (SunStar Zamboanga)