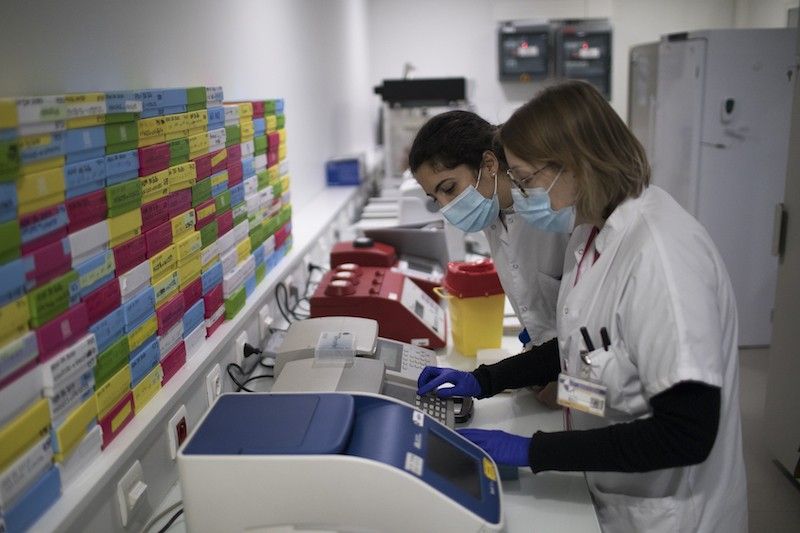 FRANCE. Medical technicians prepare samples at the University Hospital Institute for Infectious Diseases in Marseille, southern France, Wednesday Jan. 13, 2021, to study the highly contagious virus variant that has been discovered in the UK. (AP)

AFTER confirming that the more contagious Sars-CoV-2 variant has been detected in the country, the Department of Health (DOH) intensified biosurveillance and urged local government units (LGUs) to strictly ensure compliance to minimum public health standards and quarantine protocols.

In a statement Thursday, January 14, 2021, the DOH reiterated that the mode of transmission of Sars-CoV-2 has not changed and the minimum public health standards remain an effective measure against its transmission. The virus is spread through respiratory droplets.

The minimum public health standards include proper wearing of face masks and face shields, and physical distancing of at least one meter.

The agency called on LGUs to be extra vigilant and ensure strict implementation of quarantine and isolation protocols. An individual who traveled or was exposed to a confirmed case is required to undergo isolation for 14 days, the incubation period of Sars-CoV-2.

The DOH and the Philippine Genome Center confirmed Wednesday night that the B.1.1.7 variant of Sars-CoV-2, which was first detected in the United Kingdom, was detected in the swab specimens taken from a Filipino male who resides in Quezon City and traveled to the United Arab Emirates (UAE) recently.

The patient, who has been referred to a quarantine facility, departed for Dubai on Dec. 27, 2020 for business purposes and returned to the Philippines on Jan. 7, 2021 via Emirates flight EK 332.

In a meeting with President Rodrigo Duterte Wednesday night, DOH Secretary Francisco Duque III said the patient is a 29-year-old real estate agent. He resides with his girlfriend and parents in Kamuning, Quezon City.

Both the patient and his girlfriend, who is also a real estate agent, have not reported for work physically and go out only for essentials.

Duque said both tested negative for the virus upon arrival in Dubai. They had a business meeting with another individual on December 30 and were reported to have gone grocery shopping, and visited malls and tourist sites.

They were swabbed upon arrival at the Ninoy Aquino International Airport Terminal 3 on January 7. They then went to a hotel for the required quarantine period.

The patient was referred to an isolation facility in Quezon City, where he underwent an X-ray and was diagnosed with pneumonia.

The girlfriend is under strict quarantine and monitoring.

“Both allegedly had no travel outside of Quezon City noong December or no known exposure to a confirmed case or a setting with known cases. The only known contacts are the cases’ parents, who are currently asymptomatic and staying in their residence,” Duque said.

All other passengers on this flight have been advised to contact their Barangay Health Emergency Response Teams (BHERTs).

Duque said the epidemiology surveillance team of the DOH, together with the Regional Epidemiology Surveillance Unit, have already discussed the findings with Quezon City Mayor Joy Belmonte.

The DOH said weekly genomic biosurveillance will be conducted among incoming passengers, local coronavirus cases, re-infected patients and in reported clustering of cases.

The agency is also coordinating with the Department of the Interior and Local Government (DILG) in expanding contact tracing to include "third-generation close contacts" of the known B.1.1.7 case. All close contacts will be required to undergo 14-day facility-based quarantine.

The B.1.1.7 variant is one of four Sars-CoV-2 variants identified by the World Health Organization (WHO) so far.

It has been reported to be more infectious than the D614G, the dominant form of the virus that is circulating worldwide.

Other variants of the virus are the Cluster 5 among farmed mink in Denmark and the 501Y.V2 in South Africa. (Marites Villamor-Ilano / SunStar Philippines)