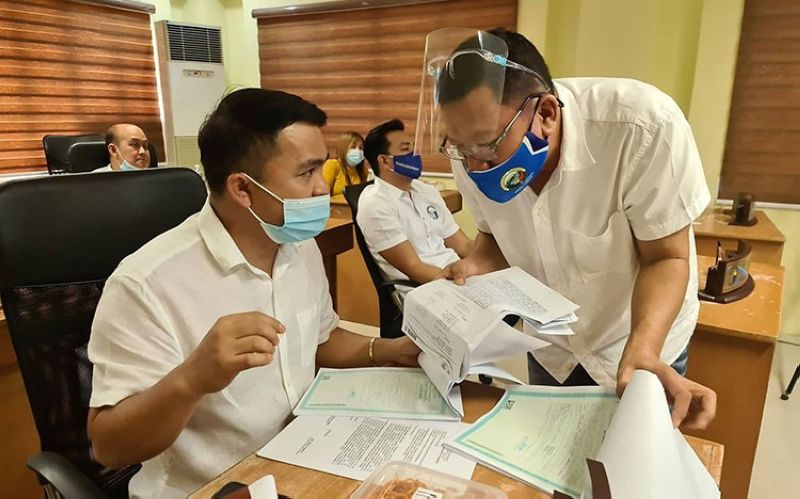 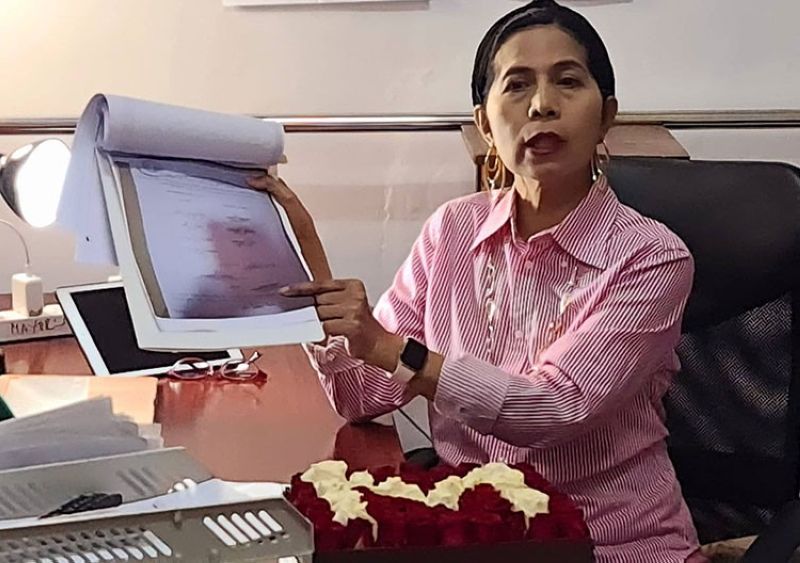 ALLEGED FAKE RESOLUTION. San Simon Vice Mayor Leonora Wong shows a copy of the alleged fake resolution reclassifying a portion of land from agriculture to industrial which was allegedly approved and signed by majority of councilors, SB secretary and approved by the concurrent mayor. (Chris Navarro)

LOCAL officials of San Simon town are yet again questioned for an alleged irregularity in the issuance of a Municipal Council resolution.

Una Grande Tierra Development Corporation (UGTDC), a business located in Barangay San Isidro, San Simon, wrote a letter to ask for an explanation from Municipal Council members about the issuance of an alleged "fake" resolution allegedly intended to defraud them.

This, after the company applied for the reclassification of their recently purchased parcels of land as required by the Office of the Mayor for their business permit renewal.

The application was allegedly filed and was unanimously approved by the legislative body during a special session held February 20, 2020 as Municipal Council Resolution 20-19.

The company then requested a certification from the Provincial Board as part of formalizing the land conversion process but was informed that "no such resolution has been transmitted to their office," the company's lawyer's letter to councilors read.

Upon learning this, UGTDC reportedly asked for a certified true copy of the resolution from the Municipal Council and was issued one with a stamp and signature.

But when the company submitted the said document to the Provincial Board, they were again informed that it was "incorrect and non-existent."

This prompted UGTDC to request another certified true copy from the offices of the mayor and vice mayor, respectively, in which the company was informed by Vice Mayor Leonora Wong that Resolution 20-19 pertained to a different resolution passed on March 10, 2020 that authorized Punsalan to inquire for a loan from different banks, and no resolution converting lands under UGTDC's name exists in the Municipal Council's records.

Aside from the alleged "fake" resolution issued, the UGTDC was also allegedly assessed regulatory fees for reclassification of land amounting to P5 million, which the company paid P2.5 million cash, and the other half through a check.

No receipts, however, were reportedly issued to the company despite the repeated follow-ups made, and the money was not allegedly credited to the local government's account.

"It has therefore become apparent that after receiving regulatory fees from our client, there was a scheme to swindle, defraud and deceive our client by presenting a falsified SB resolution," the letter stated.

During Tuesday's regular session, several councilors clarified that they did not approve nor sign any resolution concerning UGTDC during the said special session.

Flores, who was pointed as the one who proposed the supposed resolution, said several land reclassification resolutions were deliberated and approved during the said date but nothing that concerns UGTDC.

He added that the local government does not impose fees for land conversion, contrary to what was asked of UGDTC.

"The SB (Municipal Council) resolution presented to Una Grande was definitely fake and I certainly do not have involvement in the collection of fees from them," he said.

Macapagal, for his part, denounced the incident, which "tainted the reputation of elected officials and discredited the legislative body."

He also urged his colleagues whose signatures were forged to act on the misdeed committed against them.

Councilor Romanoel "Dading" Santos, who was tagged as among those who pushed for the resolution, confirmed that it was indeed his signature that was on the questioned document.

He said, however, that as acting presiding officer during the session, his only role was to approve what was voted upon by majority of the councilors.

"It was really my signature that was on the approved resolution but my stand there is that I only signed whatever was the decision of the body," he said.

Municipal Council secretary George Cariño, for his part, asserted the legitimacy of the questioned resolution.

"I can vouch for the veracity and the legality of the adoption of the resolution. The truth of the matter is that the resolution reclassifying the lands of Una Grande was duly enacted by the council. As SB secretary and once a five-time councilor, I would never secure the signature of councilors without their knowledge," he said.

He added that the duplicity of the resolution number was merely a typographical error which can be easily corrected.

Meanwhile, Punsalan's camp denied any involvement in the alleged falsified resolution and accusation of corruption attached to it.

"We vehemently deny any involvement in the said resolution. In fact, the Office of the Mayor and the Sangguniang Bayan are two separate bodies and the mayor only signs what is recommended by the SB upon scrutiny," said Municipal Legal Councel Adenn Sigua.

The mayor, however, confirmed that he issued a letter to UGTDC requiring them to apply for a reclassification of their land to industrial before the issuance of the business permit.

Vice Mayor Wong, together with councilors Beda Pineda, Irene David and Randie Flores, are preparing the possible charges that can be filed against their colleagues who are allegedly involved in the falsification of Municipal Council resolution.

"We are looking into charges of fraud which fall under criminal and of course administrative. Our councilors will act as witnesses to prove that there was no such resolution that was passed on that day," she said.

Wong identified five elected and appointed officials that will be included in the cases, namely, Mayor Punsalan, his chief of staff Loreto Santos, Councilors Santos and Basilio, and Cariño.

"Councilors and Basilio, and our SB secretary maintain the legitimacy of the resolution despite lack of official record in the SB and SP. This only means that they were involved in the manufacture of that document," she said.

The vice mayor also said that Punsalan must explain himself as his signature was affixed in the document, and the alleged involvement of his chief of staff in the issue.

"They destroyed and compromised the integrity of the Sangguniang Bayan for manufacturing and issuing a fake document," she said.

Wong also said that no assessment fees are charged for reclassification of any land based on the local tax code, rather the local government collects a development fee of P10 for every square meter with issuance of an official receipt.

She said the company applied for reclassification of about 12 hectares of land, which is supposed to be equivalent to some P1.2 million fees only, and is paid when the owner starts developing the property.

The vice mayor also noted that the whole stretch has long been declared as an industrial zone under the town's existing Comprehensive Land Use Plan, and requiring businesses to apply for a reclassification of land is already redundant.