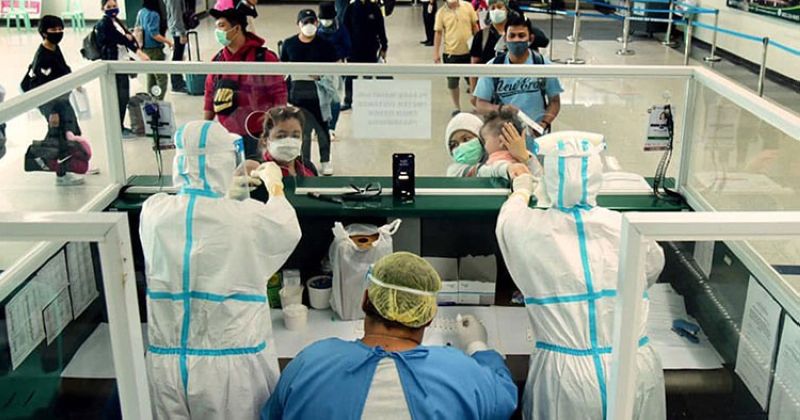 In a press release, Davao City Tourism Operations Office (CTOO) head Generose Tecson said the city will be "redirecting" its resources to "address the local transmission since this is the highest in the list of cases now."

"[We] will resume [free] testing once our Los Amigos Covid-19 Laboratory will start operations," said Tecson, who is also the Airport Health Monitoring Team head.

She said arriving passengers with negative RT-PCR tests taken within 24 to 72 hours before their scheduled flights to the city are prioritized for exit from the DIA after checking their health declaration forms (HDFs).

For Davao City residents without negative RT-PCR test results to show, the city tourism chief said, "We check HDF and papers. We make sure they follow the requirements. We take note of the vehicles they ride on, especially PUVs. They are given their health monitoring forms because they have to check-in with their BHERTS (Barangay Health Emergency Response Team). The 14-day home quarantine is mandatory."

"Panawagan sa mga LGU especially to pick up their LSIs. From outside Davao City, we don't allow na hindi sila sunduin (We are calling on the LGUs to pick up their LSIs)," Tecson said, adding that non-Davao City flight passengers may still exit the airport even without the RT-PCR negative test as long as their LGUs will fetch them and they can present other needed documents.

SunStar Davao reached out to Tecson for further information, but has not yet responded.

Meanwhile, Davao City Covid-19 focal person Dr. Ashley Lopez said in a text message that passengers with no RT-PCR test are mandated to follow the 14-day home quarantine for returning residents, while "hotel quarantine" for Authorized Persons Outside Residence (Apor).

Lopez, in a virtual presser on Wednesday, January 13, reported an increase in the number of coronavirus cases since January 7 or two weeks after the 2020 holiday season.

He said the city reverted to more than 100 positive cases a day compared to almost half the number of daily cases in the last two weeks of December.

"Since we are experiencing the post-holiday surge, by January 7 we reached 131 cases. Most of the following days from January 7 more than 100 cases are recorded daily," Lopez said. (With reports from CIO)