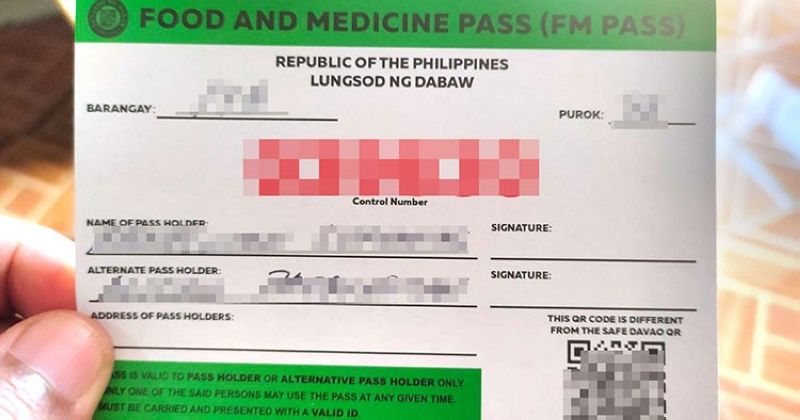 DAVAO City Vice Mayor Sebastian Duterte told the public not to panic as the city will not immediately implement the new food and medicine (FM) pass unless all qualified residents are given.

Duterte said in a radio interview on Thursday, January 14, the Vice Mayor's Office (VMO), which is in-charge of the implementation of the new FM pass, is still in the process of distributing it since early December 2020.

He said that initially, they targeted to distribute the new FM pass to all 182 barangays before Christmas.

But as of January 13, only a total of 137 barangays have received the FM pass.

Duterte admitted having a hard time getting the masterlist from far-flung areas, particularly in the third district, due to communication barriers.

Some barangays in the downtown area also have not yet finished their masterlists.

Duterte said he is hoping that all barangays would be able to finish their listing before the end of January.

Transient residents who are working within the city should also visit their respective barangays to have them included in the masterlist.

For now, he said all existing FM passes and "barangay certificates" issued to those who lost their passes are still valid.

"Wala pa nay kaso because dili pa nato i-implementar ang bag-ong FM pass until nga ma-secure nato nga naa nay FM pass tanan (That is not a problem for now because we cannot yet implement the new FM pass until everyone has their new passes)," Duterte said.

The vice mayor explained that many residents lost their FM pass, which is essential in limiting the movement of people to access goods and services, for work in the offices or industries, and other allowed activities.

The use of FM passes was reimposed after Mayor Sara Duterte-Carpio issued EO 62, which took effect on November 13.

The pass is required to buy food or medicines from 5 a.m. to 7 p.m. daily except Sundays but was adjusted to 4 a.m. to 9 p.m. when the city shifted to general community quarantine (GCQ) beginning November 20.

Those who lost their FM pass were given a "barangay certificate" to prove that they lost it.

Duterte-Carpio also said some control numbers of the old passes were not accounted for, citing its purposelessness.

He also said the shift to new FM passes was due to the rampant fake FM passes, being sold secretly to the public.

The vice mayor said the new FM pass will be controlled and regulated to ensure its authenticity once presented on checkpoints and establishments.

The actual design of the new FM pass will be bigger compared to the previous FM pass, Duterte said.

One of its new features is its color, which will be used in the color-coding scheme.

He said each color represents the different congressional districts in the city: green for first district, blue for second district, and red for third district.

The font size of the serial number is larger for easy identification when presented at checkpoints. This is to avoid close contact with security officials.

The newly-designed FM pass has a QR code and a control number. He said this is to determine whether the presented pass is legitimate or fake, which can be verified by scanning the QR code.

He said each control number is registered and controlled by the barangays. Each pass holder will be assigned a permanent control number.

In case they lose their FM passes, the barangay will only be issuing a new FM pass by giving their personal control number.

But Duterte clarified this is different from the Safe Davao QR (DQR) code, which is being implemented for contact tracing purposes.

Some of its features and uses would still be retained.

Two people can still share the FM pass if they are living in the same household.

The number coding scheme would still be retained. Passes with last digits of 1, 3, 5, 7, 9 may be used on Mondays, Wednesdays and Fridays, while those with last digits 0, 2, 4, 6, 8 on Tuesdays, Thursdays and Saturdays. All passes will not be mandatory on Sundays.