Arrest warrant out for cops accused of killing 4 soldiers 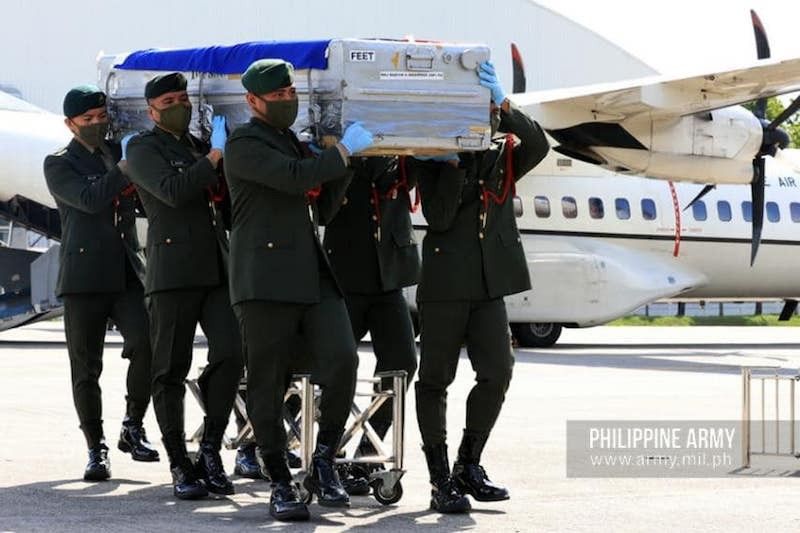 MANILA. In this photo released by the Philippine Army on June 30, 2020, soldiers carry the remains of one of the four Army intelligence officers killed at a police checkpoint in Jolo, Sulu. (Philippine Army)

THE Jolo Regional Trial Court (RTC) in Sulu has ordered the arrest of nine dismissed policemen who were charged with the killing of four soldiers.

The Armed Forces of the Philippines (AFP), which issued an appeal to the court after the accused were released from police custody, welcomed the development.

“Albeit issued belatedly, AFP is glad RTC issued warrant for the arrest of 9 police suspects in murder of 4 Army men. Detention is without bail, indicating that evidence of guilt is strong,” AFP spokesperson Major General Edgard Arevalo said.

He also called on the nine accused to surrender.

“We urge them: surrender - else, AFP and other government agencies will deliver them to court for trial,” he added.

In a press conference in Camp Crame, Usana said they were instructed to monitor the former officers after their release in anticipation of the issuance of the arrest warrant.

Hadjaruddin, Mandangan and Putalan are former members of the Provincial Drug Enforcement Unit (PDEU) of Sulu. The rest used to be assigned to the Jolo Municipal Police Station; Hadjaruddin, Mandangan They were accused of killing Major Marvin Indammog, Captain Irwin Managuelod, Sergeant Jaime Velasco and Corporal Abdal Asula at a checkpoint in Jolo in Sulu on June 29, 2020.

The incident sparked tension between the military and the police, prompting President Rodrigo Duterte to visit the troops amid the pandemic in a bid to prevent hostilities.

Delgado said the court will also hear the motion for the issuance of a hold departure order against the accused to prevent them from leaving the country. (Third Anne Peralta-Malonzo / SunStar Philippines)