Spain rejects virus confinement as most of Europe stays home 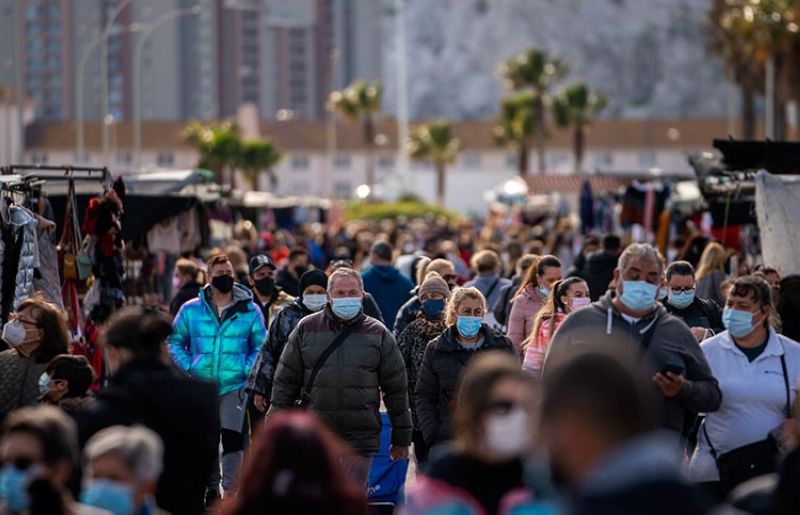 SPAIN. In this January 4, 2021 photo, people wearing face masks walk along the stalls of a weekly market in the Spanish city of La Linea. (AP)

MADRID -- While most of Europe kicked off 2021 with earlier curfews or stay-at-home orders, authorities in Spain insist the new coronavirus variant causing havoc elsewhere is not to blame for a sharp resurgence of cases and that the country can avoid a full lockdown even as its hospitals fill up.

The government has been tirelessly fending off drastic home confinement like the one that paralyzed the economy for nearly three months in the spring of 2020, the last time Spain could claim victory over the stubborn rising curve of cases.

Infection rates ebbed in October but never completely flattened the surge from summer. Cases started climbing again before the end of the year. In the past month, 14-day rates more than doubled, from 188 cases per 100,000 residents on December 10 to 522 per 100,000 on Thursday.

Nearly 39,000 new cases were reported Wednesday and over 35,000 on Thursday, some of the highest daily increases to date.

Unlike Portugal, which is going on a month-long lockdown Friday and doubling fines for those who don't wear masks, officials in Spain insist it will be enough to take short, highly localized measures that restrict social gatherings without affecting the whole economy.

“We know what we have to do and we are doing it,” Health Minster Salvador Illa told a news conference Wednesday, ruling out a national home confinement order and advocating for "measures that were a success during the second wave.”

Fernando Simón, the government's top virus expert, has blamed the recent increase in cases on Christmas and New Year's celebrations. "The new variant, even if it has an impact, it will be a marginal one, at least in our country," he said this week.

But many independent experts disagree and say Spain has no capacity to conduct the widespread sequencing of samples to detect how the new variants have spread, and that 88 confirmed and nearly 200 suspected cases that officials say have largely been imported from the UK are underestimating the real impact.

“Trying to do as little as possible so as not to affect the economy or for political reasons doesn’t get us where we need to be,” said Bengoa, who also oversaw a deep reform in the Basque regional health system.

The situation in Spain contrasts starkly with other European countries that have also shown similar sharp leaps in cases, increasingly more of them blamed on the more contagious variant first detected in the UK.

The Netherlands, which has been locked down for a month, has seen the pace of infections starting to drop. But with two percent to five percent of new Covid-19 cases from the new variant, the country is from Friday requiring air passengers from the UK, Ireland and South Africa to provide not only a negative PCR test taken a maximum of 72 hours before departure but also a rapid antigen test result from immediately before takeoff.

France, where a recent study of 100,000 positive tests yielded about one percent of infections with the variant, is imposing curfews as early as 6 p.m., and Health Minister Oliver Veran has not ruled out a stay-at-home order if the situation worsens.

Existing lockdowns or the prospect of mandatory confinement have not been questioned or turned into a political issue in other European countries.

Ireland instituted a complete lockdown after widespread infections were found to be tied to the new variant. Italy has a color-coded system that activates a strict lockdown at its highest — or red — level, although no areas are currently at that stage.

In the UK, scientific evidence of the new variant has silenced some critics of restrictions and spurred Prime Minister Boris Johnson to impose measures that are strict but slightly milder than the nation's first lockdown. People have been ordered to stay home except for limited essential trips and exercise, and schools have been closed except for some exceptions.

In Germany, where the seven-day rolling average of daily new cases has recently shot up to 26 per 100,000 people, many high-ranking officials are arguing that the existing strict confinement order needs to be toughened and extended beyond its current end-of-January expiration.

Nordic countries have rejected full-on mandatory lockdowns, instead instituting tight limitations on gatherings and certain activities. Residents have been asked to follow specific recommendations to limit the spread of the virus.

In Sweden, the issue is both legal and political, as no law exists that would allow the government to restrict the population's mobility. While urging residents to refrain from going to the gym or the library, Swedish Prime Stefan Lofven said last month, “we don’t believe in a total lockdown,” before adding, “We are following our strategy.”

Policymakers in Spain seem to be on a similar approach, although it remains to be seen if the results will prove them wrong. On Thursday, they insisted that vaccinations will soon reach “cruising speed.”

But Bengoa, the former WHO expert, said vaccinations won't fix the problem immediately.

Dr. Salvador Macip, a researcher with the University of Leicester and the Open University of Catalonia, says the combination of spiraling infections and the uncertainty over the new variants should be enough for a more restrictive approach, but that pandemic fatigue is making such decisions more difficult for countries like Spain, with polarized politics.

"People are fed up with making sacrifices that take us nowhere because they see that they will have to repeat them," Macip said. (AP)