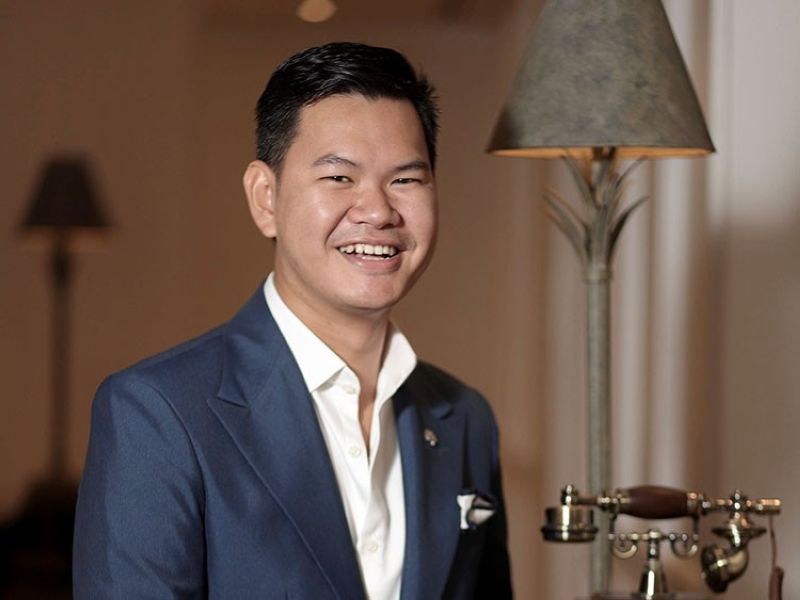 WHEN the Covid-19 pandemic hit the countries in Southeast Asia, one of the first sectors to suffer the effect was the tourism and hospitality sector. With the movement restrictions imposed, there was a dramatic decline in tourist arrivals and hotel accommodations. But this sad news in the industry did not diminish the hoteliers' desire to serve.

In the midst of the pandemic, good news came for Rey Moraga, a Dabawenyo who now works as the front office manager of Raffles Grand Hotel d'Angkor in Siem Reap, Cambodia. On December 4, 2020, via an online awards ceremony, Moraga was hailed as the "Hotelier of the Year" under the front office category in the Stelliers Awards 2020. Winners were decided based on their performance in 2019, pre-pandemic. Finalists were announced in May 2020 and it took more than six months for the deliberation process.

According to its website, Stelliers "is the only accolade in Asia that honors the dedicated professionals of the hotel industry." It is considered to be the "leading hotelier awards platform."

In an exclusive interview with Moraga, he shared that as a young high school lad studying in the University of the Immaculate Conception (UIC) in Davao City, he was torn between pursuing Anthropology in college or Hospitality. Around this time, he was a member of the Davao-based group Kalumon Performing Ensemble. Through this, he became more interested in the people and culture.

However, his heart was also leaning strongly toward Hospitality and by the end of high school, he enrolled at Enderun Colleges where he took up a Hospitality major in Culinary Arts.

"In college, I realized that I really am a people person. I like to be surrounded by people," shared Moraga, who added how he eventually learned that his choice of Hospitality as a college course also somehow gave him a chance to connect with people. In a different way, he got to experience the field of Anthropology as far as connecting with people is concerned.

During his stay at Enderun Colleges, he first met Chef Alain Ducasse during his first visit to the Philippines in 2008. Ducasse is an acclaimed chef who eventually became Moraga's inspiration in the industry.

"Whenever he visits the Philippines, I make sure to meet him. I've also met him in Paris, in Milan. [I'm inspired by] how he used his craft of being a chef to be of use to others. He is not just a chef, he is also a businessman. He is a creator," said Moraga.

Two months after graduating from college, he joined the pre-opening team of Raffles Makati. He joined Raffles Hotels & Resorts in 2012. In his six years working in Raffles Makati, he had been assigned to different tasks -- from being a concierge, in the front office, and heading the housekeeping department. It was in handling different tasks that Moraga learned more deeply the craft as his passion for hospitality continued to strengthen. He fondly remembers the best years in Raffles Makati as a concierge. Guests would be making nearly impossible requests such as having a copy of a foreign newspaper by their doorstep every morning during their stay or that guest who particularly asked for fresh pili fruits.

"When you're a concierge, you can do anything legal under the sun. Anything. It was so much fun...We called the airlines and requested them for an early morning copy of that particular newspaper delivered to us...We called our friends from the Department of Agriculture who contacted farmers from Albay who sent us boxes of pili nuts for the guest. He was actually surprised to know we actually got them fresh pili nuts," Moraga happily recalled.

This and other similar gestures of hospitality going the extra mile got Moraga recognition in the industry. In 2017, he was recognized by Accor as "The Most Outstanding Heartist" in Asia Pacific. This distinction is given to the most outstanding employee across the 80,000 employee-members in 22 countries.

After six years with Raffles Makati, Moraga was promoted as the front office manager of Raffles Grand Hotel d' Angkor in Siem Reap, Cambodia. Currently, he is the youngest department head in the hotel with more than 40 hoteliers under him.

Raffles Grand Hotel d' Angkor first opened in 1932 and is considered a historic hotel that has been a huge part of Siem Reap's tourism for generations now.

Moraga shares his win as the "Hotelier of the Year" award to his fellow hoteliers in Davao City and fellow Dabawenyos. During the quarantine, Moraga shares how he found time to re-discover old hobbies and other activities.

"This quarantine has helped me to find ways to improve myself," he said.