EXPLAINER: Procuring Covid vaccine is primarily national government's job. LGUs may watch and wait, as Cebu province does, or take 'pro-active role.' For sure: no consent, no inoculation. 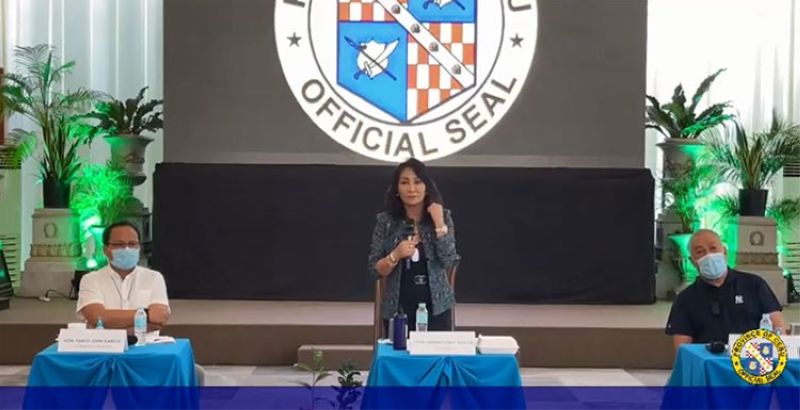 CEBU. Governor Gwendolyn Garcia (center) holds a dialogue with members of the Cebu Provincial Board and the town and city mayors on Friday, January 15, 2021. (Screenshot from Cebu Provincial Government's Facebook video)

AT A GLANCE, from what Friday's Capitol meeting and news sources told us:

[1] Local governments may buy vaccines of their choice but the national government must be a party to the sale, per policy accord among the world's vaccine manufacturers.

[2] While Cebu City and Mandaue City have appropriated money for their own vaccines, not one Cebu LGU has yet negotiated with and signed a deal with any supplier.

[3] No person, including health workers and other frontliners, can be forced to be inoculated. But details on that, along with the person's waiver of liability by the LGU for adverse effects of the vaccine, are not yet available. Other requirements may include the certification of one's doctor on fitness to be inoculated.

[4] Cebu, with the National Capital Region and Davao, will be given priority as management strategy for key cities in the rollout of the first shipment of vaccines.

CEBU CITY, CAPITOL POSITION. Cebu Governor Gwen Garcia -- in the January 15 meeting at the Capitol with mayors of towns and component cities -- restated the position she laid down last December 17, 2020: she will wait for guidelines from the national government.

The national government's policy at the start: through President Rodrigo Duterte and the Inter-Agency Task For Emerging Infectious Diseases (IATF-MEID), the central authority will choose and buy the vaccines. Any local government unit (LGU) that wishes to buy its own, on top of what the central government procures, shall enter into a three-party agreement with the vaccine supplier.

In sum: Wait for Manila's diktat.

Cebu City Mayor Edgardo Labella said last December and restated this week that he'd wait for the guidelines, trusting the assurance of vaccine czar Carlito Galves Jr. of IATF that Cebu would be given priority. Labella has been waiting since then even as he created a panel to choose the vaccine and prepare the groundwork for its use. Earlier, last December 23, the City Council included in the city's 2021 budget P400 million for the vaccine, with the plan to add P100 million in a supplemental budget.

Governor Gwen stuck to her position of not tackling the matter of vaccine yet. Friday, January 15, she said she would not announce how much Capitol would spend for the vaccine, focusing instead on Capitol programs to help small businesses and the economy recover.

'IMPATIENT LGUs' DID NOT WAIT. Other LGUs however chose not to just watch and wait. More than 30 in the list released Wednesday, January 13, had started scouting for and negotiating with vaccine suppliers as early as last year. "Most of them" were reported to have "inked the deal" already, making the other local governments in the country look like they had some catching up to do.

IATF apparently has been taking its time to issue guidelines on procurement by LGUs. Malacañang and vaccine czar Galvez responded only amid the swelling sentiment among the LGUs that chose to be active in procuring their vaccine, topped by the startling disclosure that the president's adviser on entrepreneurship, Joy Concepcion, led a private group to secure the first shipment of 2.5 million vaccine doses to this country. (The private organizations that put up the money included Cebu's Aboitiz Foundation).

Last December 26, Manila announced that a local government may buy its vaccine of choice, provided the government is the third party, conforming to the policy set by the vaccine suppliers.

President Duterte, acknowledging the success of some LGUs in clinching their own deals, said, "Many local governments opted to buy on their own because they have the money and they can choose the vaccine they want."

The vaccines an LGU purchases, DILG and DOH made clear, shall be for those persons who are not included in the national government's priority list.

PRO-ACTIVE LGUs, SOUND BITES. Senator Francis Tolentino, chairman of the Senate committee on local government, lauded the President this week for ratifying the initiative of some LGUs in procuring vaccines.

He defended the legal right of LGUs to make the emergency purchase, citing the Local Government Code and the procurement reform law and asserting that no current law or the president's Executive Order to the Food & Drug Authority on EUA (emergency use authority) prohibits LGUs from buying vaccines on their own. The requirement about the tripartite agreement is imposed by the vaccine makers; Manila is just conforming to it.

Senator Tolentino called the zealous LGUs "pro-active." Governor Gwen said the activism would draw sound bites and headlines but she would rather concentrate on the more pressing problem of nursing the province's economy back to health. Getting the vaccine is largely the national government's job. Besides, she said, they wouldn't know how many doses Capitol needs to buy until they are told its share from the Manila allotment. As to controlling Covid-19 transmission, the governor would stick to the health protocols and boosting immunity, including "traditional" methods.

WHO DID BETTER. One can't tell for now which LGUs took the better option. But the outcome of the race for the vaccines, whether a local government joins it or just watches and waits, won't be determined until the next few months.

Developments on the coronavirus -- its containment or further spread and how access to vaccines makes the difference -- may tell which public officials took the better path in coping with the pandemic.