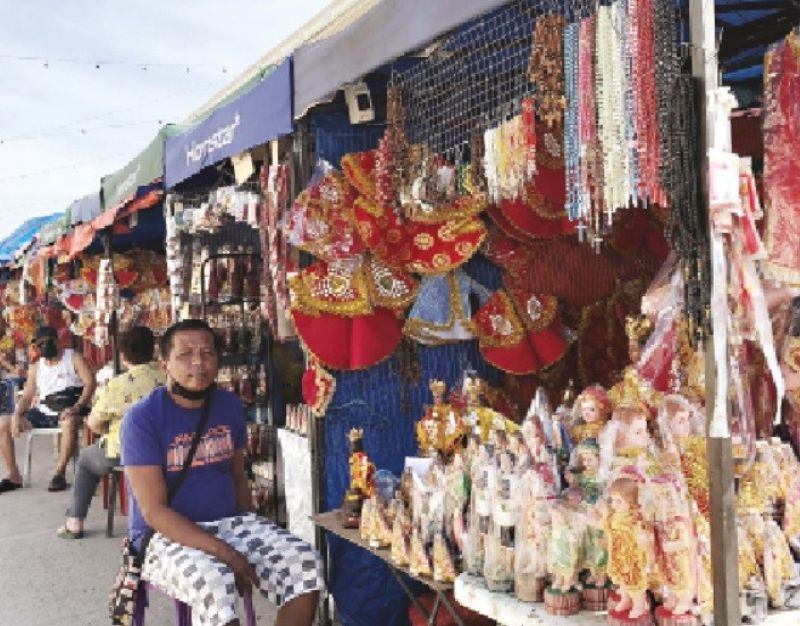 COVID EFFECT. Vendors of Santo Niño images who used to sell beside the Basilica Minore del Santo Niño, have been temporarily moved to the Compania Maritima compound near Cebu City Hall to give them a bigger space to sell and avoid crowding. But unlike in previous years, sales have been bad as most customers failed to show up. / Jerra Mae Librea

VENDORS of Santo Niño images are experiencing low sales this year as only few customers came to visit their stalls since the start of the nine-day novena for the feast of Cebu’s patron.

The vendors who used to sell beside the Basilica Minore del Santo Niño have been temporarily relocated to the Compania Maritima building near Cebu City Hall before the start of the novena on Jan. 7, 2021, where the space is bigger.

“Magpunsisok nya didto maong gibalhin mi diri para luag, sobraan sa social distancing, wa na hinuon mi halin (We were moved here to have a bigger space and to avoid crowding. With too much social distancing, now we have no sales.),” said Leticia Abenido, one of the 60 relocated vendors.

Abenido said only few customers came and even those who regularly had the vestments of their Sto. Niño image changed didn’t come this year.

Abenido said most of the vendors, including her, still have to pay for the tent which they bought for P2,900 to use as display area.

With the cancellation of the physical novena masses at the Basilica, Abenido hoped the City would allow them to go back to their original stalls so they could at least recover some of their financial losses and pay their debts such as the downpayment for materials used in the Sto. Niño vestments.

Prevention, Restoration, Order, Beautification, and Enhancement (Probe) chief Raquel Arce said she has raised the matter to the committee tasked to oversee the vendors.

She said the vendors were supposed to stay at Maritima until April in view of Cebu’s commemoration of 500 years of Christianity this year, but this has been reconsidered due to the vendors’ financial situation.

Arce asked the vendors to be patient pending the committee’s final decision on the matter. / JJL