5 fast facts about the Sinulog 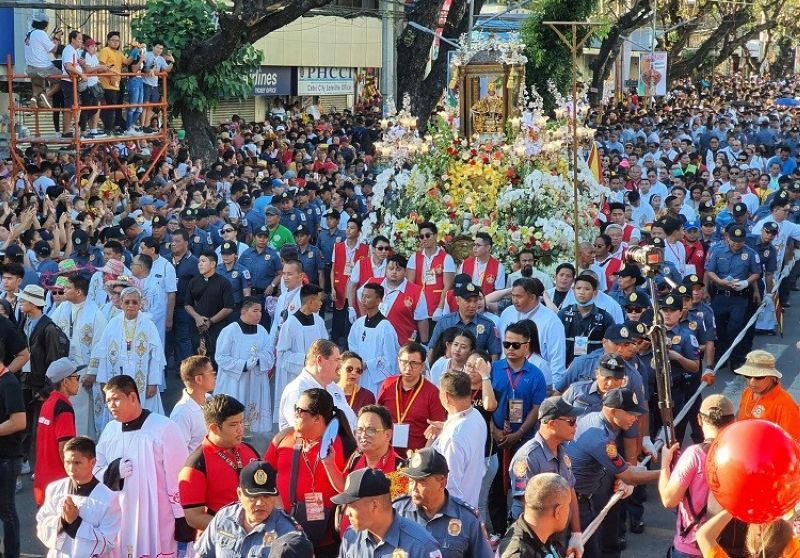 THE Sinulog Festival is one of the most attended festivals in the country. It has gathered millions of people since its inception.

Throughout centuries, the Sinulog has evolved from simple foot movements to a grand spectacle that honors the Señor Santo Niño (image of the Child Jesus). Sinulog is also considered the link between the country’s pagan past and its Christian present.

Here's #allyouneedtoknow about the celebration.

Although the Sinulog we know today is a dance ritual in honor of the miraculous image of the Santo Niño, the dance movement of two steps forward and one step backward to the sound of the drums was already danced by Cebu natives in honor of their wooden idols and anitos. This movement resembles the current (Sulog) of what was known as Cebu’s Pahina River.

2. The Santo Niño was a baptismal gift to Rajah Humabon's wife

Portuguese navigator Ferdinand Magellan and his men came to Cebu on April 7, 1521, and introduced Christianity. He gave the Santo Niño as a baptismal gift to Hara Amihan, wife of Cebu’s Rajah Humabon, who was later named Queen Juana. At that time, not only the rulers were baptized but also about 800 of their subjects.

David S. Odilao, Jr., then Regional Director of the Ministry of Sports and Youth Development, organized the first-ever Sinulog parade. He gathered a group of students, dressed them up, taught them how to dance the Sinulog to the beating of the drums.

The Sinulog fiesta before the parade was a feast featuring Sinulog dancing performed by various groups to fulfill religious obligations. On the third Sunday of January each year, besides the faithful who joined the Sinulog to fulfill a panaad, the event began to attract an increasing number of tourists.

The organizers said over 2.5 million people gathered around the parade route and the Basilica. The other million was from areas such and Labangon, V. Rama, Capitol, Escario up to Bulacao area.

5. January 17, 2021 will mark the first virtual-only celebration of the Sinulog

Due to the coronavirus disease (Covid-19) pandemic, organizers of the 2021 Sinulog Festival said in place of the grand parade, an "online celebration" will be held to prevent the virus from spreading and a resurgence of cases.

A collection of videos of Sinulog performances as old as those taken in 1982 had been part of the virtual program along with footage of other performances done in the last 40 years.