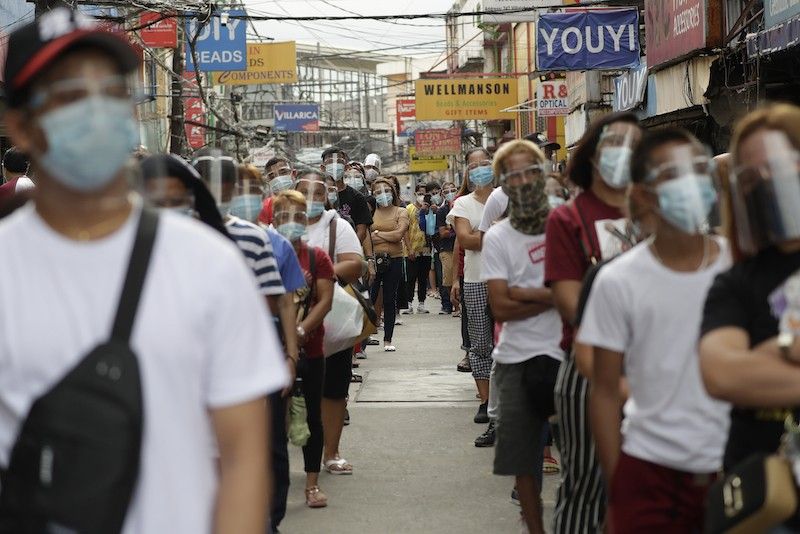 MANILA. Filipinos wear face masks and face shields as they queue for a chance to view the image of the Black Nazarene in this photo taken on January 9, 2021. (File)

CORONAVIRUS infections in the Philippines breached 500,000 on Sunday, January 17, 2021, almost a year after the first case was confirmed in the country.

The Department of Health (DOH) reported an additional 1,895 cases, pushing the total case count to 500,577.

Davao City, with 107 new infections, was back on top of the list of cities and provinces with the highest number of cases.

Infections accelerated in the recent seven days from January 11 to 17 as testing activities normalized after the Christmas and New Year holidays.

A total of 12,887 additional cases of infection were reported for the period, 30 percent higher than the 9,883 reported in the previous week from January 4 to 10.

Under the DOH’s time-based recovery strategy, 5,868 people were listed as recoveries on Sunday.

It was the lowest “mass recovery” since the DOH introduced its time-based methodology on August 16, 2020. Mass recovery is reported every Sunday.

Under this scheme, individuals who tested positive for Sars-CoV-2 but manifest no symptoms of coronavirus disease 2019 (Covid-19) for at least 14 consecutive days are listed as recoveries.

They include those who got sick and recovered, and those who were asymptomatic throughout the 14 days, the incubation period for Covid-19.

The new recoveries on Sunday increased the total to 465,991 and reduced the number of active cases to 24,691.

Globally, more than 94.5 million individuals have contracted Sars-CoV-2 as of 3 p.m., January 17, according to the Johns Hopkins Coronavirus Resource Center. Deaths exceeded 2 million.

The first case of coronavirus infection in the Philippines was announced by the DOH on January 30, 2020. Patient No. 1 is a 38-year-old Chinese female tourist from Wuhan, China, where the new coronavirus strain called Sars-CoV-2 was first detected in December 2019.

On February 1, 2020, the Philippines went down in history for listing the first Covid-19 mortality outside China. Patient No. 2 was the 44-year-old Chinese male companion of Patient No. 1. The fate of Patient No. 1 is not known. She was allowed to return to Wuhan.

The first Filipino who contracted Covid-19 is Patient No. 4, a 48-year-old man who had traveled to Tokyo, Japan. The case was confirmed on March 6, 2020.

The first Filipino Covid-19 mortality was Patient No. 5, a 62-year-old Filipino with no history of foreign travel. He had visited a muslim prayer room in San Juan City.

Patient No. 5 infected his wife, who became Patient No. 6, confirming local transmission of Sars-CoV-2 and prompting President Rodrigo Duterte to declare a state of public health emergency on March 8, 2020. Both Patients 5 and 6 succumbed to the disease. (Marites Villamor-Ilano / SunStar Philippines)