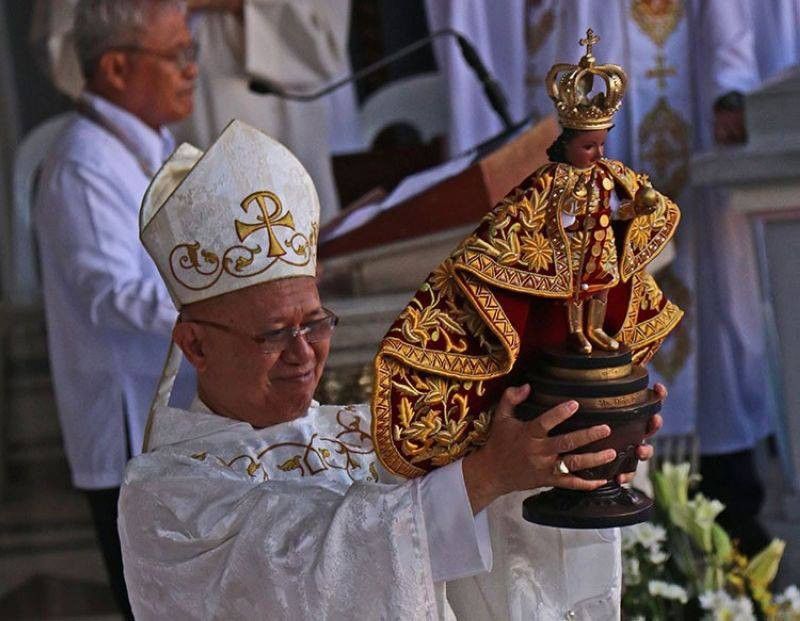 REACH OUT. In the feast of the Sto. Niño de Cebu, which many Cebuanos regard as the culmination of the Christmas season and the launch of the year, Cebu Archbishop Jose Palma’s message of union and solidarity with the marginalized is worth putting into practice during a pandemic that exacts distancing, isolation and community quarantine. / Sunstar File

In a brightly lit but sparsely occupied Basilica, Cebu Archbishop Jose Palma delivered the most important message towards the end of a stirring homily given during the Solemn Pontifical and Concelebrated Mass that opened the 456th feast of the Sto. Niño on Sunday, Jan. 17, 2021.

Viewed by 30,000 persons on Facebook, the livestreamed 6 a.m. mass had the Cebu archbishop exhorting devotees and other viewers to “enthrone” the Sto. Niño in their hearts by reaching out and assisting other niños in a year Palma regards as a blessing that challenges the faithful to live out their faith.

This year’s absence of physical masses, processions and other rituals enshrined in past fiestas clears inner space for the faithful to reflect that true faith in One so small and powerful must embrace the plight of others who are made “little” by deprivations and rendered bereft of dignity in society.

Archbishop Palma pointed out how the Niño needed the nurturing by Mary and Joseph to reach maturity and carry out His mission. Whether it is food for the hungry or the nourishment of empathy for the dispirited, responsiveness from neighbor to neighbor or from parish to parishioner is the call of living one’s faith.

The Cebu archbishop cited Mambaling and other parishes that have programs to reach out to the marginalized in the community. Just as parishes, laity and volunteers initiated community rehabilitation for former drug dependents at the height of the War on Drugs, the church leads institutional stakeholders in ensuring that social upheavals respect human dignity and bring about personal transformation.

As the pandemic and the resulting recession continue, the need is to plan beyond short-term dole-out assistance to sustain long-term needs for livelihood and vaccination as protection against the coronavirus disease 2019 (Covid-19).

Dislocation under the pandemic is not just physical but economic and psychic. Felisa was among the thousands of devotees disappointed by the cessation of physical masses on the fifth day of the novena for the Sto. Niño at the Basilica.

A resident of Lapu-Lapu City, Felisa was not permitted to enter the Basilica for the physical masses when these were held during the first four days of the novena.

On Jan. 11, an official statement signed by the Basilica rector Fr. Pacifico Nohara Jr. informed the public about the Augustinian clergy’s decision to limit the masses to the virtual portal to prioritize public well-being.

Felisa, who lives alone, has no resources to go online. This year is the first in five decades that she has not joined the novenario.

The dissipation of the crowds of devotees, along with the trickle of pilgrims constricted by stringent travel requirements, also affects the earnings of candle sellers, Sinulog prayer-dancers and street vendors of Sto. Niño statues and religious items.

As reported by Jerra Mae J. Librea of SunStar Cebu on Jan. 16, 60 vendors, who were moved to the Compania Maritima building near Cebu City Hall, have suffered poor sales as well as incurred loans for their new stalls.

Relocated to decongest the Basilica area and initially planned to occupy the Maritima stalls until the April celebration of Cebu’s 500th years of Christianity, the vendors have requested the Cebu City Government to let them return to their old stalls at the peripheries of the Basilica, where they hope to recover from their losses.

Will local government units, the church and other stakeholders respond to those made more vulnerable by the pandemic in meeting their basic needs? Will members of the informal economy benefit from the local government’s vaccination program to have long-term protection against Covid-19?

Or will these other “niños” just be subjected to perennial surveillance and restrictions under Oplan Bulabog for putting survival before the self-discipline they are often accused of not practicing?