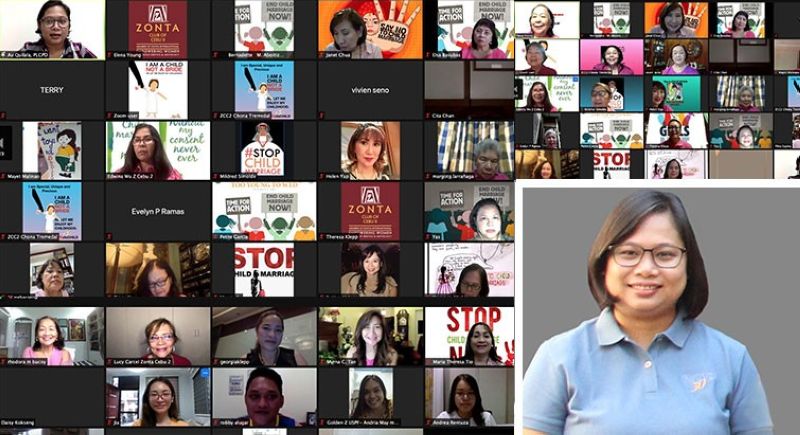 DISCUSSION. Members of Zonta Club of Cebu 2, Z Club of Childlink High School and the Golden Z Club of the University of Southern Philippines Foundation Inc. and other guests listen to the discussion of Maria Aurora Quillala of the Philippine Legislators Committee on Population and Development about child marriages. / CONTRIBUTED

THE Zonta Club of Cebu 2, in its cause to empower and advance the status of women, has embarked on the challenge to end child marriages among Filipina girls who are often on the receiving end of the adverse consequences of these underage unions.

Maria Aurora Quillala, advocacy and partnership manager of the Philippine Legislators Committee on Population and Development, said the adverse effects of child marriages and unions among girls cover their physical, mental and emotional health and also their economic well-being.

Quillala made the statement in her keynote speech in the “Girls Not Brides” webinar hosted by Zontians on Saturday, Jan. 9, 2021.

A child marriage happens when one or both of the spouses are under the age of maturity which is, in the case of the Philippines, 18 years old. Quillala said cases of child marriages are technically equivalent to forced marriage since under the law, persons under 18 do not have the capacity to freely enter into contracts, let alone an eternally binding contract of marital relations.

The Philippines, according to data presented by Quillala, ranks 12th globally in terms of absolute number of child marriages. “Marriage,” in this case, includes both those that are legally binding and common law unions where the underaged spouse or spouses cohabit with each other.

One in every six Filipinas enters marriage before she turns 18 while 15 percent of women aged 20-24 say they got married before they turned 18 and two percent of Filipinas in this age group married while they were still under 15. Around 75 percent of the time that underage girls are ushered into child marriage are marrying adult men.

Quillala said there is a strong correlation between incidence of child marriage and poverty in the country. Aside from poverty, traditions where children are compelled to enter into marriage also play a significant factor.

Although the Family Code of the Philippines requires that parties in a marriage should be at least 18 years old, this does not stop common law unions and even marriages of young girls that are sanctioned by exemptions under other laws such as the Code of Muslim Personal Laws of the Philippines, which allows the marriage of girls upon reaching the age of puberty.

Girls entering marriage at a very early age face consequences from the risk of bearing and rearing a child at an age when her anatomy and emotional and mental state are not yet ready for motherhood and when she, herself, should still be under a nurturing parental care.

According to the data from the Philippine Statistics Authority, pregnancy and childbirth-related complications among 15- to 24-year-old mothers account for 22 percent of maternal deaths in the country. The child born from a young mother also faces the risks of preterm birth and low birth weight, the factors that lead to infant mortality.

Adolescent pregnancy may be a result from child marriage. In other cases, child marriages also proceed from the intent to “preserve the family’s honor” when a girl is found to be conceiving a child.

In terms of opportunities, a girl who is ushered into marriage loses her opportunities for self-improvement and better standing when she comes of age. Data show that the top reason for girls in dropping out of school is “marriage and family matters.” Without completing her education, a girl who is forced into marital life also loses her chances to land a good job that could fit her interest and skills that she could have acquired from studying. This case results in the economic dependency of a girl to her husband.

According to Quillala, the initiative and call for legislation to end child marriages in the Philippines date back 10 years ago. However, a proposed bill for the said purpose only materialized in 2019. Before the end of 2020, a consolidated bill to end child marriages, which makes marrying children a public crime, has been passed in third reading in the Senate. In the House of Representatives, three proposed bills for the same purpose remain pending and unprioritized at the committee level.

The road to end child marriages has been rough. The Zontians are committed to reach out and educate stakeholders, so more Filipino girls are given the opportunity to manage their choices towards a better and brighter future, empowered through quality education and financial independence.