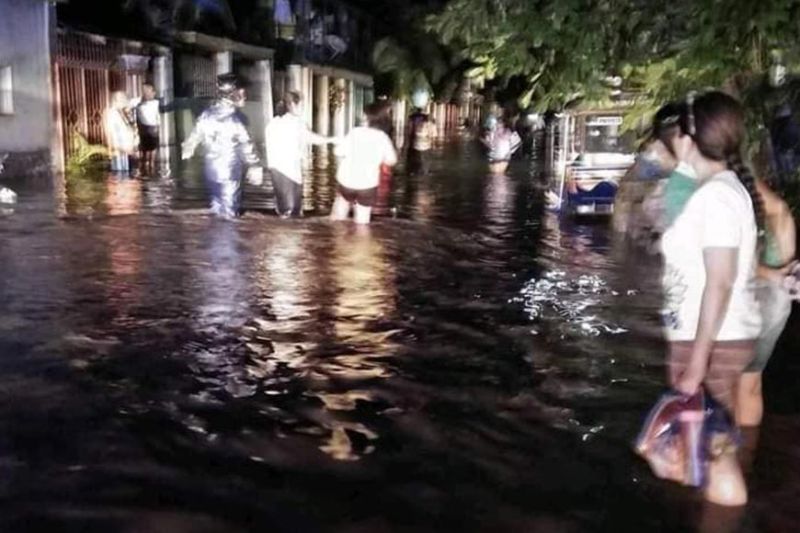 SAN CARLOS. Some areas in San Carlos City were flooded following a heavy downpour that caused some of its rivers and creeks to overflow Saturday night, January 16, 2021. (Photo grabbed from San Carlos City PIO's Facebook page)

Gustilo said the flooding is due to strong rains that fell on the city's mountain areas and rushed downstream, overwhelming some of its rivers and creeks.

"Our water system cannot hold the volume of water so it overflowed to the streets and houses in Barangays 1, 5, 6 and parts of Barangay 2 and Rizal," he said.

The city proper like in San Julio Subdivision and Don Juan were also flooded, he added.

The continuous rain lasted about three hours and subsided by 11 in the evening, Gustilo said.

The mayor added this is the first time that San Carlos City was flooded by waist-high waters that also entered some homes, forcing residents to evacuate.

"It alarmed many residents," he said.

Rescuers from both government and private sectors were immediately dispatched.

No fatalities were reported, Gustilo said.

Engineer Arthur Batomalaque, senior environment management specialist of the City Environment Management Office, said plastic wastes that clogged waterways were not the cause of the flood.

"It has been long addressed by the city government as evident that the water did not last long but immediately subsided, an indication of a non-clogged drainage system," Batomalaque said.

Batomalaque said the mayor plans to widen the waterways including the exits of creeks and rivers, especially in flood-prone Barangay 1.

Gustilo asked the people of San Carlos City to be always on alert especially when there is rain.