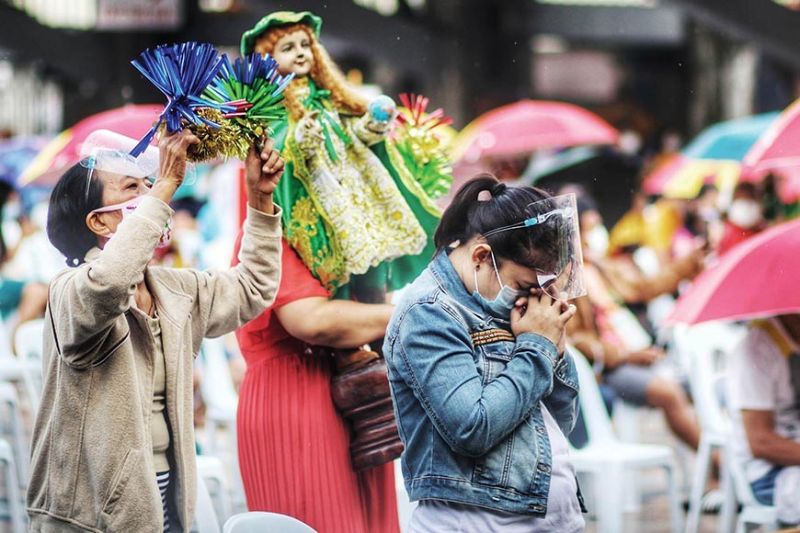 DEVOTION IN THE TIME OF CORONAVIRUS. The coronavirus pandemic has failed to stop these devotees from braving the rain to offer their prayers at the Basilica del Sto. Niño Pilgrim Center in downtown Cebu City during the feast of the Child Jesus, or Fiesta Señor, on Sunday, Jan. 17, 2021. Stringent travel restrictions and strict implementation of health protocols have convinced many people to stay at home and watch Sinulog-related activities online. / AMPER CAMPAÑA

THE culmination of the Fiesta Señor 2021 on Sunday, Jan. 17, 2021, was muted by restrictions imposed by the ongoing coronavirus disease 2019 (Covid-19) pandemic.

The scene on the streets of Cebu City that would have been filled by hundreds of thousands if not millions of revelers in past celebrations was like any other Sunday since the city was placed on modified general community quarantine status.

There was hardly any traffic and only a few people were up and about.

The ban on mass gathering to prevent transmission of Sars-CoV-2, the virus that causes the highly infectious disease, had seen to that.

Because the use of quarantine passes was not suspended, those who ventured outside without one risked getting apprehended.

Mayor Edgardo Labella had also prohibited loud music, which meant there was no non-stop playing of the Sinulog theme song that could have attracted a crowd.

Residents had braced themselves for a “different” Sinulog, having known for some time that major events like the grand parade would not push through this year.

The health crisis had forced Sinulog organizers to go virtual, streaming live religious activities like the novena masses in honor of the Sto. Niño.

Beginning Jan. 12, devotees were no longer allowed to physically attend any novena masses at the Basilica del Sto. Niño as a precautionary measure against infections.

Despite this, the Basilica remained open for devotees who wanted to offer a prayer.

On Sunday morning, they gathered at the Basilica’s Pilgrim Center.

Even though their number slightly rose around 10 a.m., law enforcers were on top of the situation, said City Councilor Phillip Zafra, committee on public order chairman.

Aside from police, members of the Prevention, Restoration, Order, Beautification and Enhancement team; City Disaster Risk Reduction and Management Office; and City Environmental and Sanitation Enforcement Team were deployed in the vicinity of the Basilica to enforce health protocols.

Majority of the visitors were compliant, Zafra said, save for some individuals who brought children with them.

Minors below 15 years old and senior citizens above 65 years old are still prohibited from going out pursuant to the mayor’s executive order.

Meanwhile, in lieu of the grand parade and the ritual showdown, the Sinulog Foundation Inc. (SFI) and the steering committee led by Vice Mayor Michael Rama, overall convenor for Sinulog 2021, aired a 10-hour virtual program, which showcased performances of contingents in the last 40 years.

Entries from Filipino communities from other countries were also shown.

Msgr. Roberto Alesna presided over the mass held at the Fort San Pedro to kick-start the program.

Labella was unable to attend.

In the neighboring city of Mandaue, the Sinulog was also quiet.

Police did not receive reports of parties or activities related to the annual cultural and religious festival.

It was just an ordinary day, according to Maj. Zosimo Jabas, chief of operations and management unit of the Mandaue City Police Office.

In the past, the celebration in Cebu City spilled over to Mandaue with revelers flocking to its many party venues.

Jabas said around 100 people attended the mass at the National Shrine of St. Joseph in Mandaue City.

The priests later performed a Sinulog dance in honor of the Sto. Niño.

On Saturday, Jabas directed police station commanders to monitor barangays for mass gatherings, especially those with chapels that has the Sto. Niño as their patron.

They also visited malls and hotels, but the crowd stayed away, he said. (JJL, KFD)