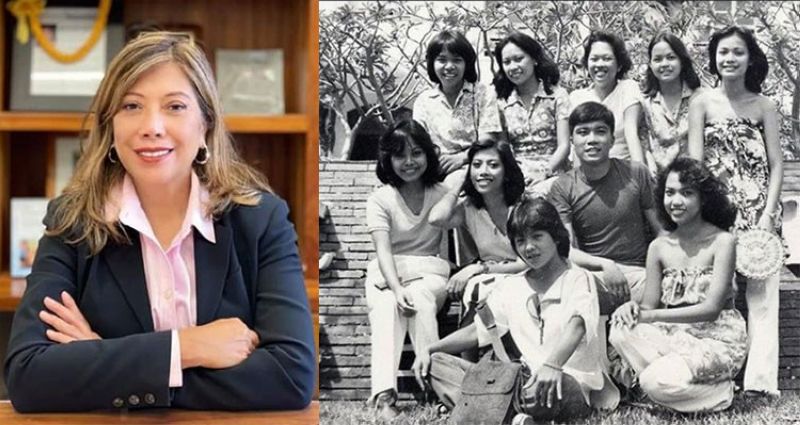 Hawaii Senator Bennette Misalucha (left) and Bennette (2nd row, second from left) with her classmates at the University of the Philippines (UP) Cebu in Cebu City. (Contributed photos)

(UPDATED) BENNETTE Espineli Misalucha, who worked as a TV news reporter and anchor in Cebu City before migrating to Hawaii, was appointed state senator July 9 last year, following the death of the incumbent legislator, Senator Breene Harimoto. Misalucha won the special election held last November 3 and will begin this month serving the rest of Harimoto's term as an elected replacement. She fills the seat until November 7, 2022, with right to unlimited reelection.

Misalucha represents Hawaii's District 16, which includes Pearl City and the world-famous Pearl Harbour. She is one of the state Senate's 25 members, compared to the 51 lawmakers in the state's House of Representatives.

Apparently, Bennette is the only Filipino-American of Cebu origin, early work experience and education to be occupying now a state Senate seat in the United States.

When Governor David Ige (D) appointed Misalucha last July for the interim period, from July 9 to November 7, or about four months until the special election, she said her dad, a political science major who died in 2015, would've been proud. "He was the one who told us to aim high."

And her papa would've been a lot prouder when she later won the seat by election, trouncing her rival, also a woman who is Republican. Democrat Bennette is a senator in the lone state of the United States whose upper house is dominated by Democrats, 24-1, with only one Republican in the house.

Misalucha was about nine units shy of graduation from the communication program of University of the Philippines Cebu College when she was recruited by then Channel 3 manager Rudy Ylaya. She worked at the government-run TV station as "reporter, news anchor and producer," according to a published bio in Hawaii, from 1980 to 1984, her years of professional journalism work in Cebu.

DYCB-TV, originally of Banahaw Broadcasting Corp., became part of government television during martial law, declared in 1972 and effectively ended in 1986. With the call sign Channel 3, it broadcast national news and features from its parent news organization Maharlika Broadcasting System in Manila, and local content from its Cebu production crew. The TV channel later became ABS-CBN Cebu.

She continued in Hawaii her media work, serving as managing editor of "Fil-Am Courier," billed as the longest-running ethnic paper in the state, and as reporter and associate news producer of KHON Channel 2 News.

Her Senate campaign propaganda included her vast experience as an executive, having "established herself as a community leader holding key positions in banking, marketing, business and communications strategy."

She owns and runs for more than 12 years now Red Monarch Strategies Inc., a business strategy and communications organization she founded in 2008.

Previously, she was vice president and regional director for community relations of Actus Lend Lease, LLC, an international construction and development company, which is said to be "the US leader in military housing privatization."

Like many other state legislatures in America -- and unlike Congress of the Philippines -- the Hawaii State Legislature is a part-time body and many of its senators and congressmen have active careers in the private sector.

That allows Misalucha and her colleagues to engage in non-government work. Conflict-of-interest rules though restrict the nature and extent of their private activities.

Representatives and senators will enjoy increased salaries and annual compensation over the next six years, starting this year, from $62,604 to $74,160, or about $2,000 more each year. Critics ask whether Hawaii legislators are "paid too much."

Her additional schooling in Hawaii enabled her to obtain a bachelor's degree in communications/journalism from University of Hawaii-Manoa (1984-1986), which credited some of her mass-com units back at UP Cebu College. She also took graduate school studies at Banking Administration Institute at University of Wisconsin (1997-1999).

She has received various awards as a business and community personality, including The Outstanding Filipinos in America Awards last October, "Woman of the Year" by the Filipino Women's Civic Club in 2011, and "State Mother of the Year" for American Mothers Inc. in 2007. She has two grown children: Danielle Evangelista and Christian Evangelista.