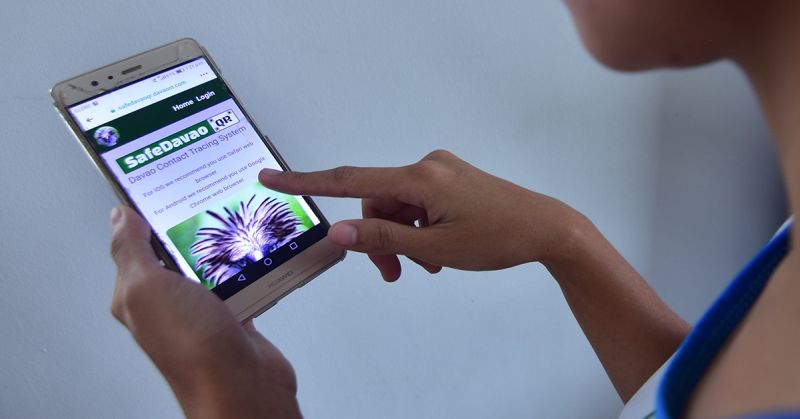 THE Davao City Government warned the public against scammers or any individuals who might be taking advantage of the Safe Davao QR's (DQR) "push notification," saying the city will not be asking for the public's information in the text notification.

This came after the City Government announced on Friday, January 15, 2021, the pilot implementation of the push notification for Dabawenyos who were possibly exposed to a coronavirus-positive person. Those who were exposed will be getting a notification through a text message.

Mayor Sara Duterte-Carpio already said in a previous radio interview that the City will be using "masked phone numbers," where the sender's contact number will not appear but only the DQR's contact name (Safe Davao QR). This is to ensure that scammers will not take advantage of the DQR's text notification.

In a radio interview on Monday, January 18, the mayor said the notification will only inform and give the recipients instructions on what to do.

The text message will contain information on the symptoms they need to watch out for. It will also include the number of the operation center, in case they will manifest these symptoms.

In addition, the notification system will also advise the recipients to self-isolate.

"There is nothing there that ask na ihatag imong pangalan. Walay ginapangayo ang text message. One way ang text message and naa didto ang numbers na tawagan. Dili na need mureply (The text message will not be asking for any information, especially your name. It will be a one way text messaging with the numbers you need to call. There is no need to reply) [because] it's system generated," Duterte-Carpio said.

The mayor added there is no need for the City to ask for additional information with regards to their contact history for the past 14 days because it is already noted in the system.

"The only thing na ginabuhat sa DQR is to give you not a warning but a message na you were in possible contact with a confirmed Covid-19 patient," Duterte-Carpio said.

The mayor added that recipients of the text message who are possibly in close contact with a positive individual, depending on their contact history, could reach up to a hundred.

"Can you imagine kung kani nga tao gatrabaho o gatuyok, naga-adto sa grocery (if these people will be working, roaming around, or going to the grocery) for the past 14 days?" she said.

Since the city started the push notification, there were reports that some have panicked upon receiving it. But the mayor, again, reminded them to read carefully the text message.

Meanwhile, she reiterated that the city has a different notification method for individuals who are in actual close contact with a positive patient. The city does manual contact tracing and interviews for them.

She also said the city sends the notification through text as it is the fastest way to inform them.

Also, the mayor said text messages will come in both English and Cebuano language.